A bit of sunshine for the chilly Spring Days

Back in about 2006, Ollies Bargain Outlet had a huge sale of Vanna White acrylic yarns. One of my co-workers was a huge crochet person and a yarn hoarder. She convinced me to go with her at lunch and we ended up buying probably 10 skeins of several colors because the price was so incredibly low…I think it was less than $1 for jumbo skeins!

Anyway, I am not a fan of many of the colors I purchased…I originally intended to make afghans for a nursing home that her father was in, but then he died and we lost interest in the project.

I then used the yarn to start a sampler afghan…ugh, was it ugly and had too many bobbly things/stitches…the tension was not correct for all of the different stitches…I probably made about three feet of it and then frogged it.

Next, I purchased a crochet sweater jacket pattern…I bought the pattern because the model was wearing a color that was this similar golden yellow. Frankly, I look horrible in yellow, so that idea went out the window.

I used a YouTube video called Which Way Filet. 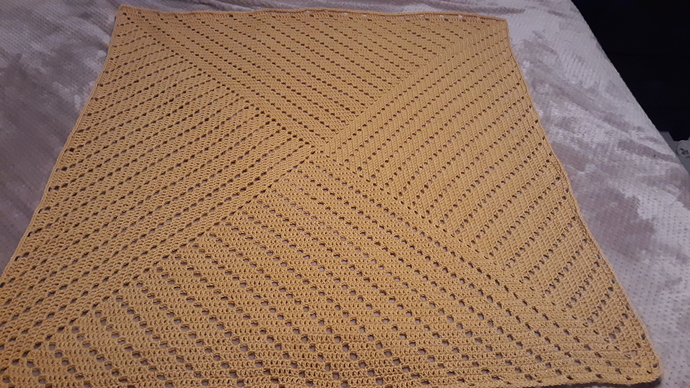 This is very pretty! What a lovely pattern and I think it goes very well with the colour. Subtle but just enough detail to perk the whole thing up.

How’d you know you’d be corona prepping all those years ago? It was meant to be. And, such a cool pattern, too.

This pattern is awesome, and I love this colorway. I’m proud of you for not giving up!

That pattern is so pretty! It looks very vintage to me. I love it!

Very neat design. Times like this is why we stash craft supplies.