I was partnered with @roler in the hoopless hoopla swap. I had had an idea in mind for months for a refrigerator magnet for her, but could never figure out how to make it happen. For this swap, I realized I could change tracks and make it a hoop!

I love the adventures of her adorable companions and their travel photos, and I had a scene in mind with a bunch of them having fun, rowing a boat on the lake outside her home.

The final (& second!) version I made, held up by the lake (photo by roler): 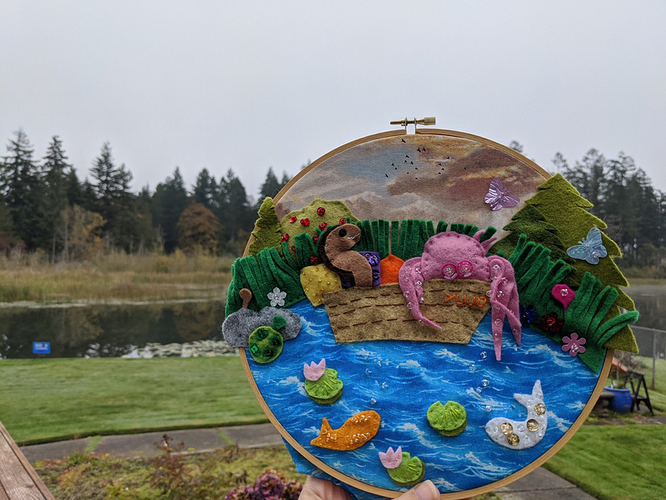 This final hoop is the eel, the octopus, the shrimp, the turtle, and … i don’t know what the little tan worm is! Katsuyuki the eel Is lolling back against a pile of pillows, while Kimutako the octopus dabbles tentacles in the water. (I had trouble making oars & tentacles rowing, so I have decided the oars are inside the boat, as the gang is resting after an afternoon of energetic rowing) Three tips of tentacles are peeking up behind the head to make a total of 8.

There are goldfish burbling under the boat, and trees & grass line the pond. The turtle is about to climb up on a rock to enjoy the sun with a friend, and the shrimp is exploring the flowers along the grassy banks.

This is actually the second version I made - the first is still lost in shipping. That one was smaller overall and had a two-toned octopus, as Kimutako has a deeper pink underneath. And fewer sparkly bits over all, I kinda went crazy on this second version with sequins etc. I had all these creatures & a boat already made, and the leftover fabric was sewn together too, as I went through various attempts to do other happenings in the pond, and so I just made a second one & was going to see about making it into a bag or something for roler next year. But it was sheer luck I had finished it so that after the first envelope went missing, i had this larger version ready to go!

This had so many little pieces I actually laid it out using cardstock first: 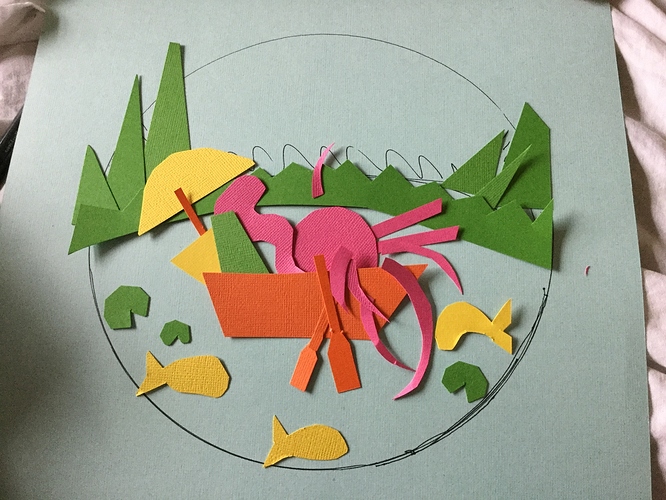 Then I came across these two fabrics that solved the issue I had with how to indicate water and sky: 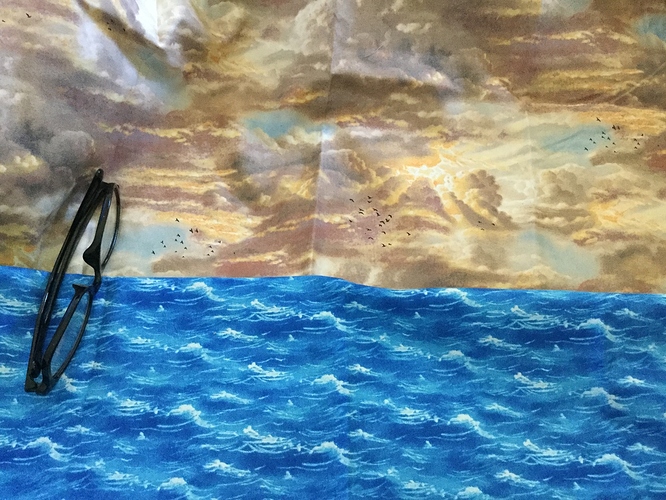 Some progress shots of both versions, mostly the second: 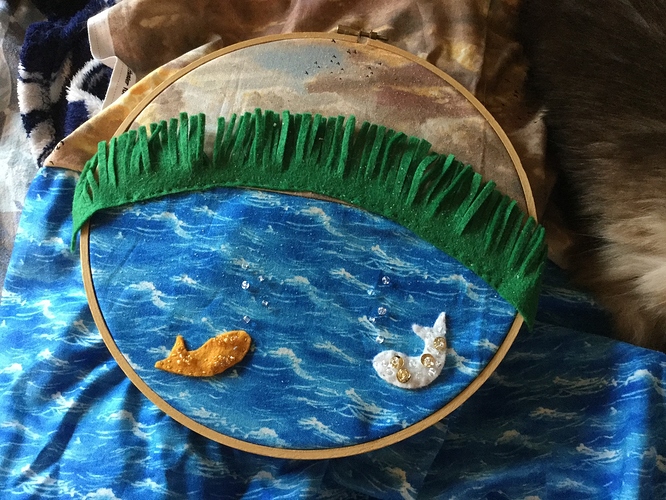 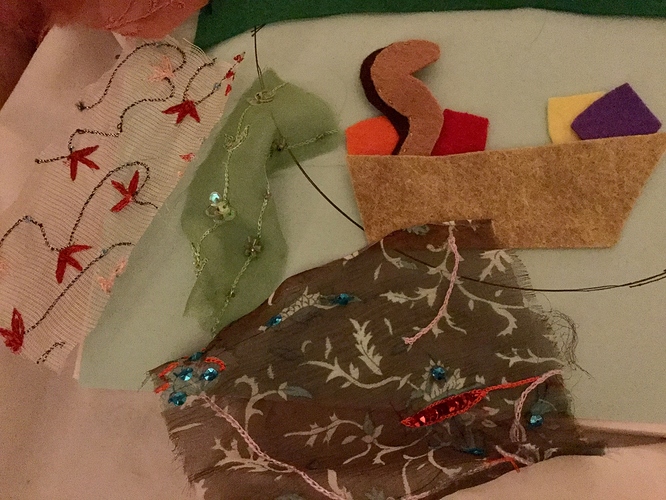 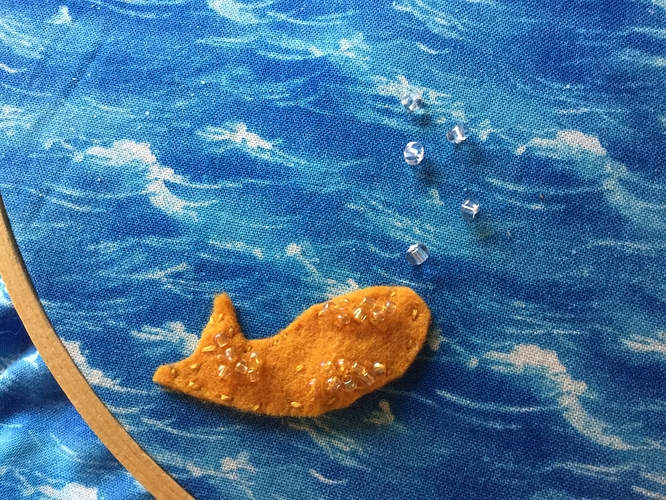 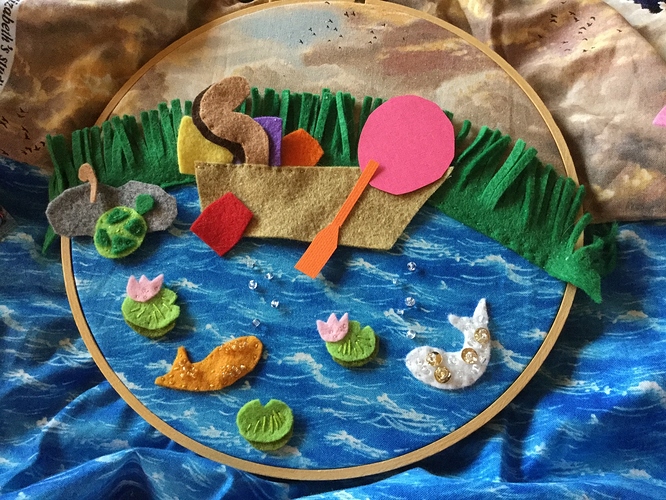 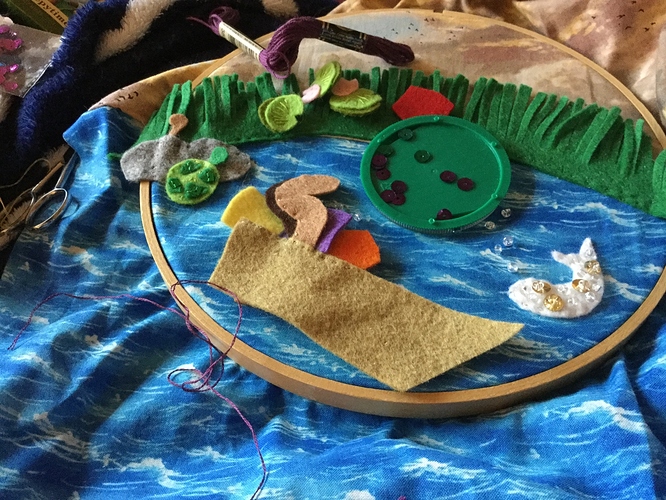 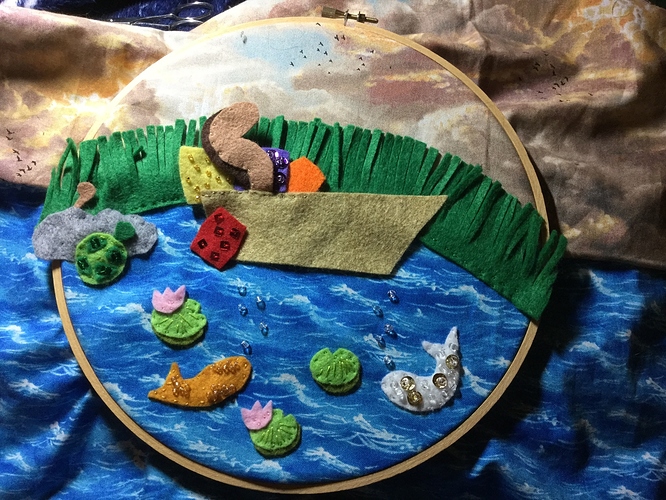 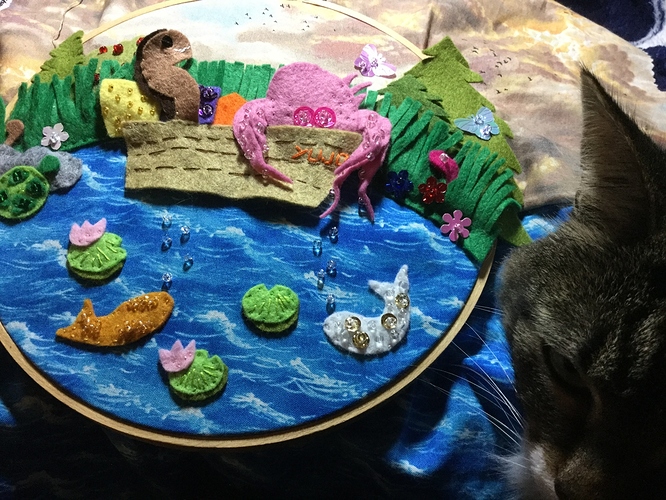 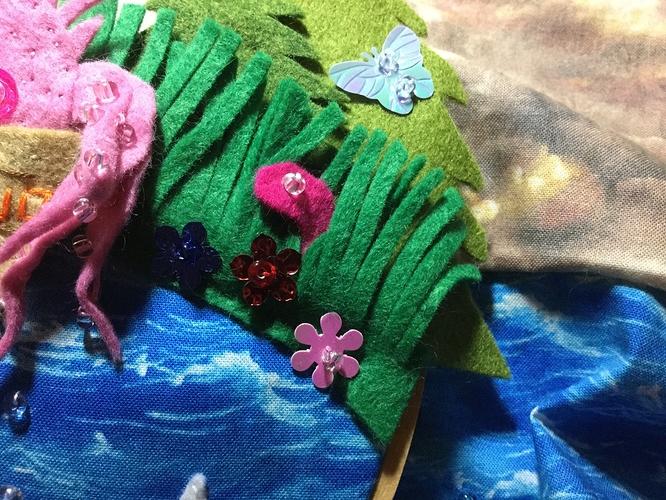 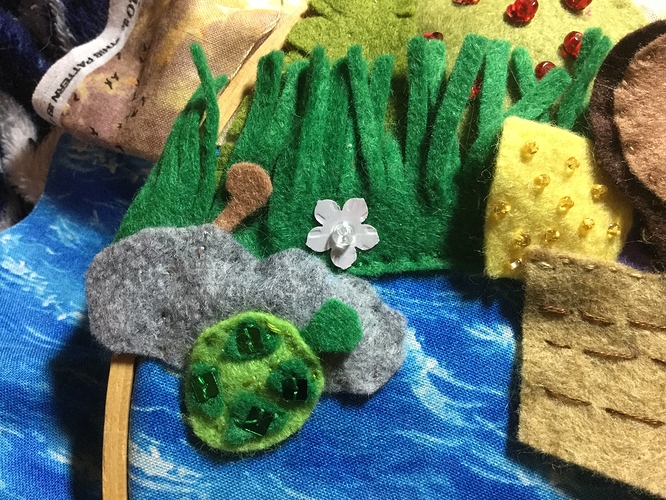 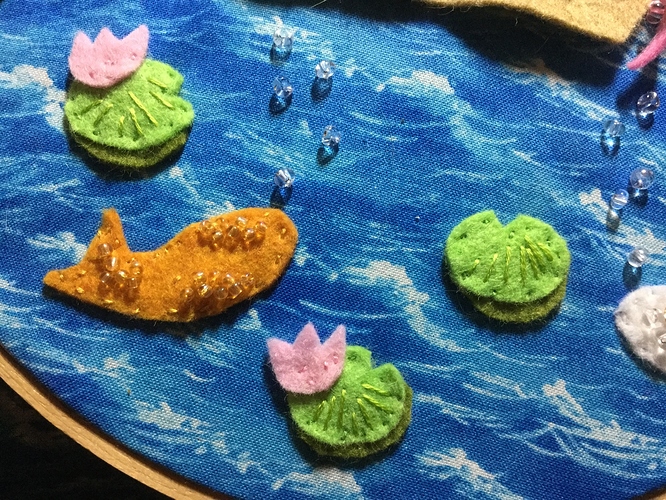 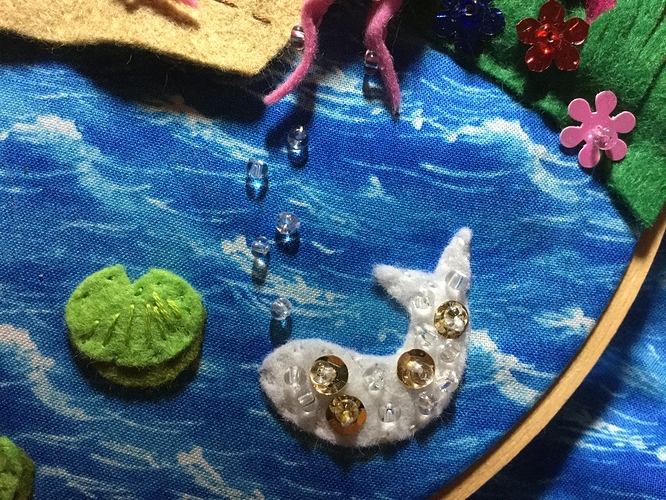 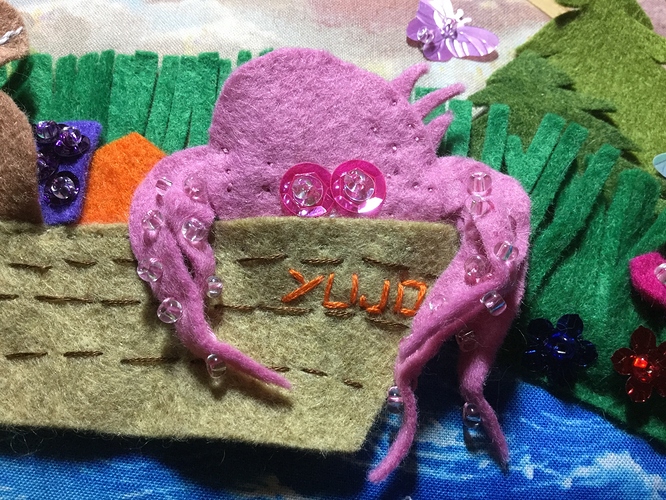 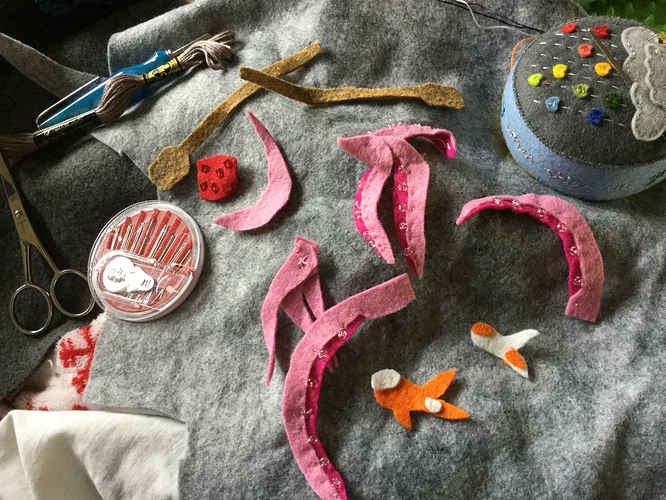 I had so much fun stitching these up, and imagining them all having fun on the lake on a summer day. I have actually met some of the companions when we toured Seattle during two different Christmas visits by Roler! I especially loved seeing them having fun during our Zoo visit.

I looooooove my hoop! I immediately recognized all my little sea creature friends, and I even thought it looked like the lake by my house! Excellent job portraying all that! XD There are SO many cute details to keep finding, and it’s just so colorful and cheerful and really makes me smile.

Thank you SO much!

AMAZING! I love all the details, it’s like a feast for the eyes! It feels like a story illustration. I can’t believe you had a second one already waiting in the wings! This is so fun and whimsical, roler was lucky to have you for her partner! This is such a thoughtful swap package!

Omygosh this is so detailed and personal and amazing! The fabric choices really are perfect— is the sky one actually clouds or just perfectly representative? The whole thing is magic, truly. What a personal and wonderful gift. Well done!

Oh my gosh oh my gosh this is the COOLEST!

This is so great. Love the in progress shots.

That’s so cool! I love that there’s so much going on, but it all fits together beautifully.

Amazing! I love the guy peeking out of the grass…and the beaded fish…and the sequins… it’s all so incredibly detailed! Great job!

This is wonderful!! So perfect for roler!

Wowwwww! This is stunning! A real labor of love!

It is actually clouds! And little birds, and a sunset-y sun! It is lElizabeths Studio - Noahs Ark - Cloudy sky with birds”. It is a repeating pattern but luckily just perfectly fit one repeat in the hoop. 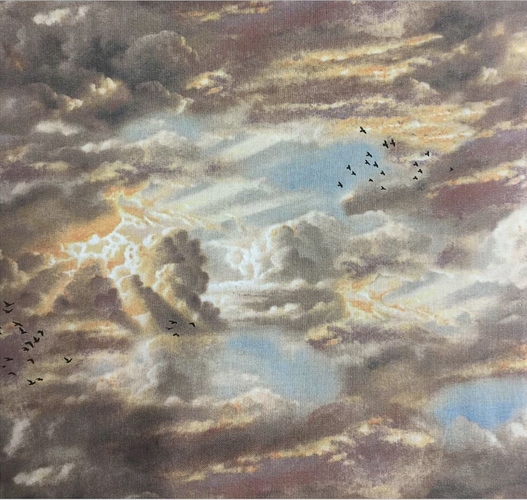 This is so fantastic!

Project of the year!

Wowzers! So many great and fun details all the way down to the base fabrics.

Fantastic! This is so amazingly detailed and fun.

The story and the process always make the end more wonderful for me…we all know the adventures of the Roler’s pals so this is so epic!!! Love the background, the water, the bling…

Congrats! Your Applique Hoop is one of this week’s featured projects. You are awesome!