Down The Rabbit Hole with the Red Queen

I titled this latest Alpha Stamps project “Down The Rabbit Hole” because this little tyrant actually took me there. I had planned to use her as a book cover, in which I would use two of the cutouts to make the covers. Alas, though, this little queen would not let go of her heart shaped staff, nor would she not quit pointing in such a rude manner. I would have had to make a pretty thick book in order to assure that it could open correctly. I decided to just start painting Her Majesty and see what would become of her. Here’s the story of our journey together. 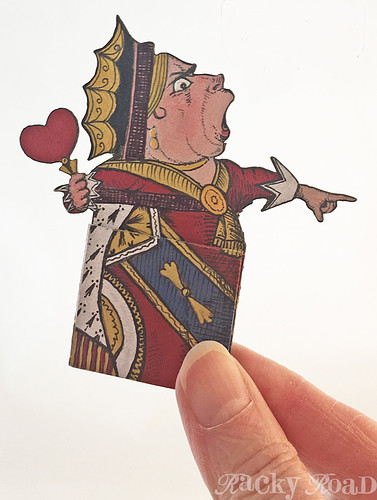 I used an image from “The Red Queen” collage sheet as a reference for color, etc. and started painting just the shoulders and head of the queen. At this point, my plan was to use her as a back cover and make a tiny rectangular cover in front. Once I got that top part painted, it felt weird not to have the rest painted, too, so I penciled it in and got to work. My solution: just keep painting and worry about construction later. Most times this works out for me. The queen, though, had a different plan. Look how tiny she is! She’s still pretty mean, though.

Once I got the entire queen painted (plus the front cover, so her the dress would still be complete with the cover closed), I glued a strip of card stock to the back of our queen, making sure there was room for the front cover to close under her right hand. Wow, great idea. Now, if I were to make a little book, it’s going to cover up all that work I did painting her dress. Plus, there’s no way the book will close, because the spine isn’t thick enough to allow it. Luckily, I had the foresight to leave the strip of card stock long. Perhaps I could use what used to be the front cover to finish out the back of her dress, and then make a book on the backside. Genius! (*note: I painted the card stock brown because I did not prime the cardboard figure before painting it. If I had painted on the lighter card stock, the colors wouldn’t match.) Alas, I had the same problem with the back of the “book” than I did with the front. It just would not close with pages in it. On to plan C. 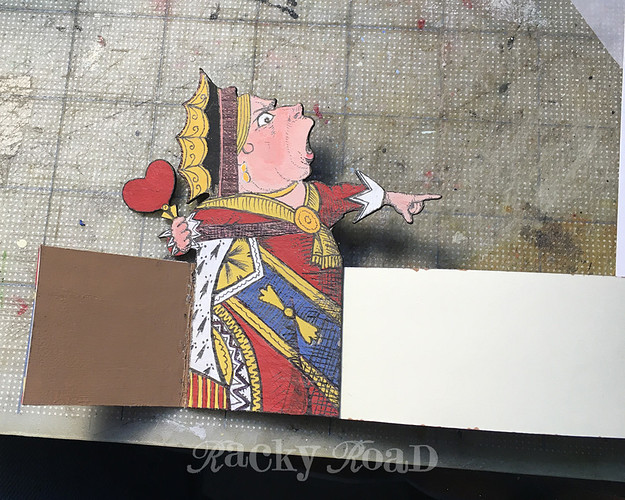 After the step above, I attached a piece of cardboard to the non painted side of the card stock so I could continue on with the front of the dress. Here’s Her Majesty at this point, completely painted: 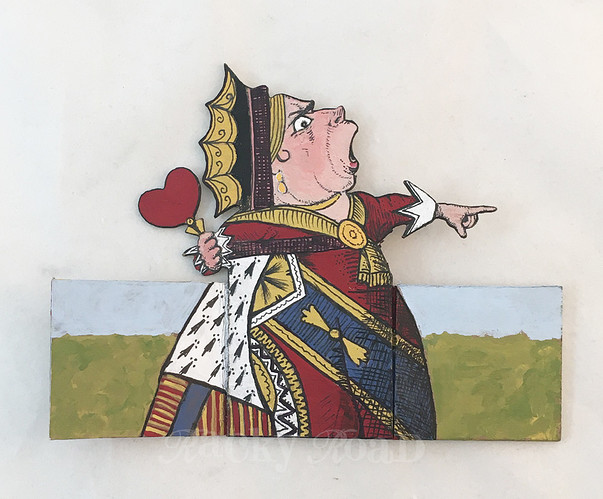 OK, now we’re getting somewhere. I decided to just make a little scene from Alice in Wonderland and use that weird shape as well as I could. I put the Cheshire cat up in a tree, and used the Queen’s pointing hand as a signpost to Wonderland. It’s an odd little project, but at least something was made of it! 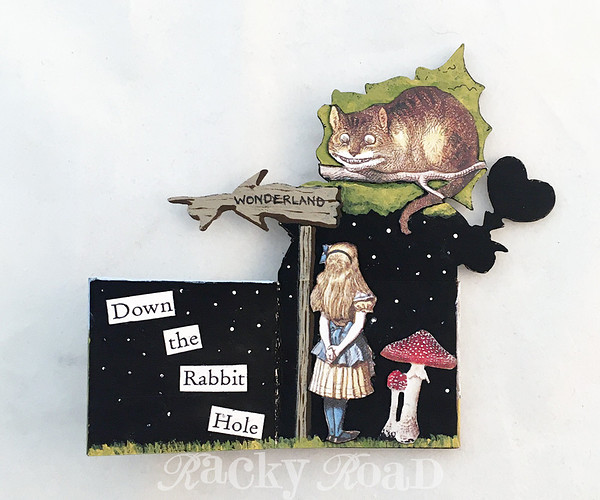 She is small, but mighty. And she definitely has a mind of her own. 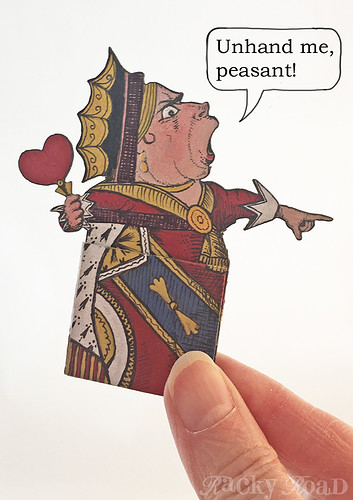 Wonderful! Glad you had the patience and determination to stick with it…love that the scene behind takes advantage of the shape!

Also, you painting is amazing!

The hand-into-sign transformation is incredible. Seriously. You are a genius.

Hillarious. The red queen is so demanding. She does take over. The only route out is to do as she says. What a fun project.

Great thingie! It would be fascinating to just come across this somewhere; it’s clever and quirky and beautifully crafted.

Do your projects normally just hop in line and go like you planned? Mine always seem to get fussy and despotic, dragging me away from my original plan into unmapped territory.
I’ve learned to let go and enjoy the ride.

I’m not a planner, but I usually have somewhat of an idea of how things will turn out. Lots of times, happy accidents occur. For this project, none of the accidents were really so happy.

I still enjoyed the process; it was just a little more frustrating than I’m used to.

This is so very cool!

I would expect nothing less from her! I think she is delightful and job well done!

You’ve got some mad skills. I can’t imagine doing this all by hand. Reading the process was fun.

This is incredible! I would have never known you drew that! It looks like a reproduction of a carving. Very, very cool!