That is so adorable, I love it so much and the colours are lovely

I SO wish this were my size!

Class or Challenge Title: Headmistress 12 Trees - Angel
House: Gryffindor!
Project Name & Page Link: D&D Patches
Brief Description: As soon as I saw the embroidery files for these patches, I knew I needed to make them for my husband for Christmas. I love how beautifully they came out!
Project Picture: 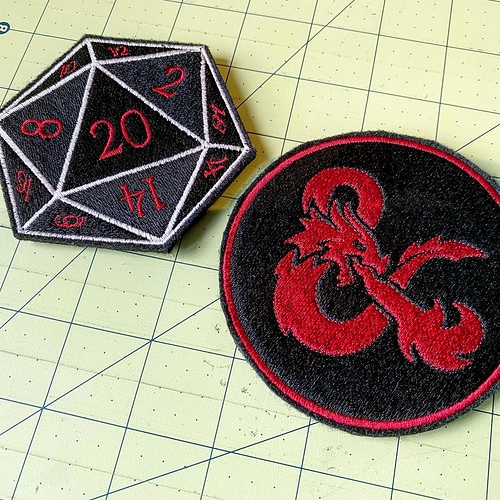 Gryffindor House is again hosting our annual holiday card exchange. This exchange is open to all HPC members of any House, and cards can be handmade or store bought. (No judgement!) You may participate as much or as little as you wish. This is not a swap, and no one will keep track of cards you send or receive. You can send cards to just a few people, to all the members in your country, or to everyone around the world who signs up. It’s up to you.

To participate, please send Mistress Jennie your name & mailing address (including country), exactly as it should appear on the envelope, by December 1st. I will compile the list, and send it back to you on December 2nd. At that point, you can write and mail your cards!

Class or Challenge Title: Headmistress/November - Leaky Cauldron
House: Hufflepuff
Project Name & Page Link: Coffee & Walnut Cake - I use this recipe - https://www.bbcgoodfood.com/recipes/coffee-walnut-cake, but with a couple of tweaks - I mix all of the walnuts into the mix and make extra “filling” and ice it with the filling, as well as it being in the middle.
Brief Description: I am so grateful for all of my hubby’s love and support, especially over the last few crazy months, so I made him his favourite - coffee & walnut cake
Project Picture: 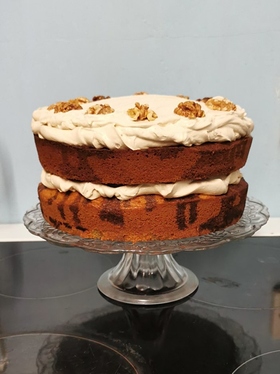 Note - it does feel really odd to be spooning a liquid over a hot sponge cake, just out of the oven, but go with it - it makes the sponge so lovely and the coffee taste is really good - and that is coming from someone who is not really keen on coffee cake!

I really need to look into an embroidery machine, there are so many amazing patterns out there that I need to make! These are fantastic, especially the D20

OK, so like, what kind of embroidery machines do you all have? Just curious.

Project Name & Page Link: Last Unicorn Hat - Mulligan! (follow for Rav pattern link)
Brief Description: A colorwork hat for my eldest niece. I substituted worsted weight yarn for the DK that the pattern calls for. Had to redo the hat after the first came out too large.
Project Picture: 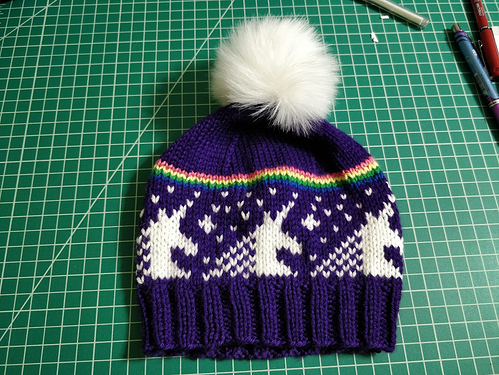 OMG @CraftsUntold, that hat is beautiful!!! I love it!

And thank you, @MistressJennie! I’ve been looking at them off and on for years, and they are soooo tempting.

I’ve been pretty absent from this board for ages, (going to change that!) Consequently I missed the ornament swap, but I’ve just put up my harry potter tree and I thought you guys would like to see it. It’s 90% ornaments from past rounds of the swap. It’s made me so happy today to unpack them all. Next year in our new house, I’ll get a bigger tree, they’re all crowded on there right now. But it still looks fab!! 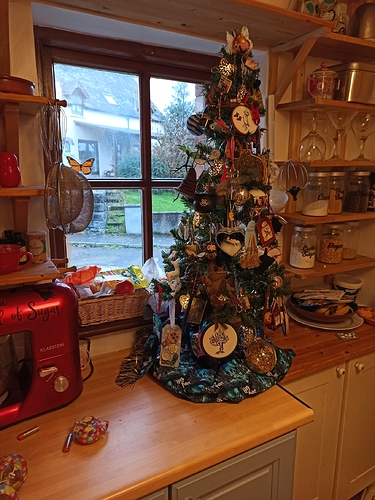 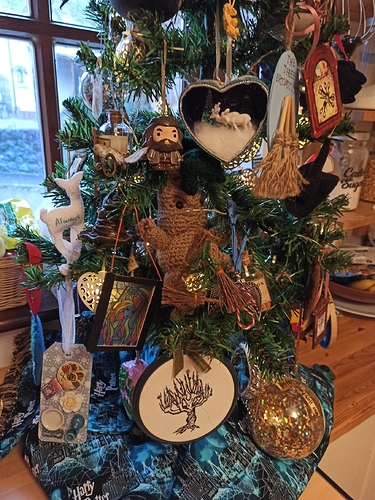 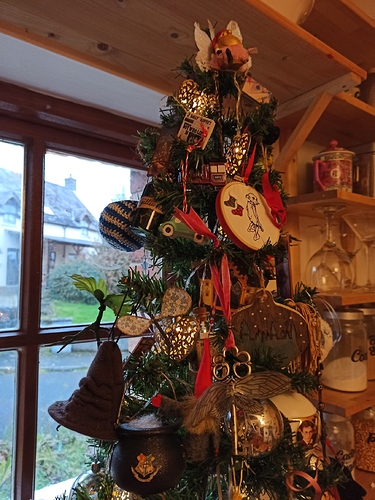 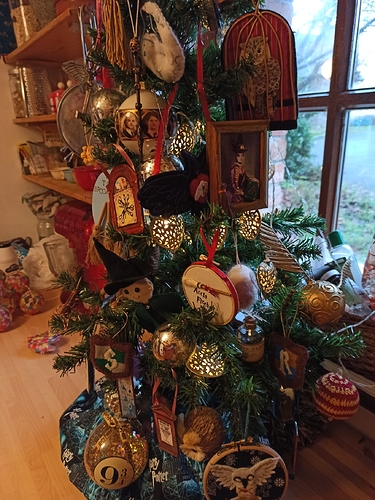 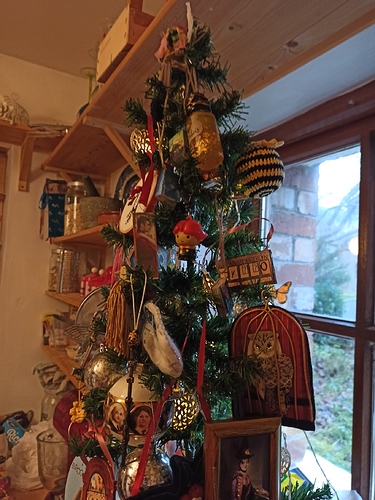 Edel I love your tree!

Brief Description: These mini books were made for gifts that I sent for the ornament swap. One became an ornament and the other a trinket that can be clipped on a backpack. Owl ornament that I made for the Harry Potter ornament swap is made from clay and kiln fired with a green glaze. 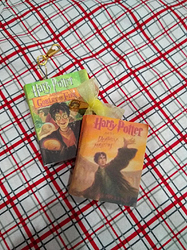 Class or Challenge Title: Study of Ancient Runes
House: Hufflepuff
Project Name & Page Link: Goblet of Fire Ornament
Brief Description: This ornament that I made for the Harry Potter ornament swap is made from clay and kiln fired with glaze. The names of the competitors are written on in it. 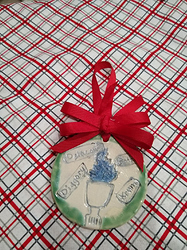 I’ve been pretty absent from this board for ages, (going to change that!)

That tree is bursting with HP! I’m sure magic is involved.

Hello all! Just checking in! @edel Your tree is fanstastic! I love it!

On to other business! I’m still working on my Season Stitch-a-Long for an advanced studies project but I’d like to propose another! It’ll likely take me the next couple weeks for sure. Here she is:

~ ADVANCED STUDIES PROPOSAL ~
Project Name: “Home for Christmas” 3D Cross Stitch House
House: Gryffindor
Brief Description: This project may or may not take 3-4 weeks but the article/pattern states it takes about 30 hours to complete so, uh, I think that it should qualify as an advanced study. Lol. It shall take patience but also some cunning charms to take a flat cross stitch and transfigure it into a 3D house! (Honestly…I had to read the directions on assembly like 3x before they made sense to me so wish me luck.

) Here’s what it should look like when it’s done! 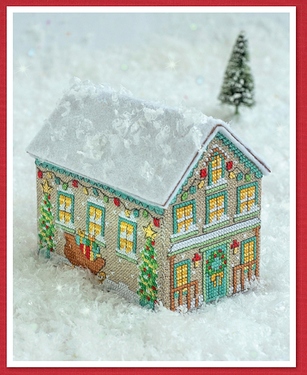 And for a not so long project I have some homework to turn in:
Class or Challenge Title: December 12 Trees Challenge- ICICLES
House: Gryffindor
Project Name & Page Link: Christmas Shrinky Dinks!
((I tried to find the link on the Michaels website but couldn’t find it on there. It’s a kids’ Creatology pack I found on the side of the kids Chrstimas crafting middle-of-the-aisle thing.))
Brief Description: Ya know…sometimes a quick craft kit is all your need to have some fun. I found these quick little all-in-one Shrinky Dink kits for $0.90 a piece! I assume I probably did Shrinky Dinks as a kid but I have no memories of it. I had THE BEST time doing these with my daughter. And since we’re homeschooling this year we learned the science behind Shrinky Dinks, some modern day technological uses for them, and she lit up when I brought out these little kits for us to do our own. We enjoyed it so much we promptly went out and bought the big sheets of it to make our own designs…including one type that you can print on and then shrink! So…expect more in the future! It was the perfect Icicle homework because we had to have a very specific temperature and keep them in for just a minute or two. (We had our faces glued to the oven watching all the magic happen. 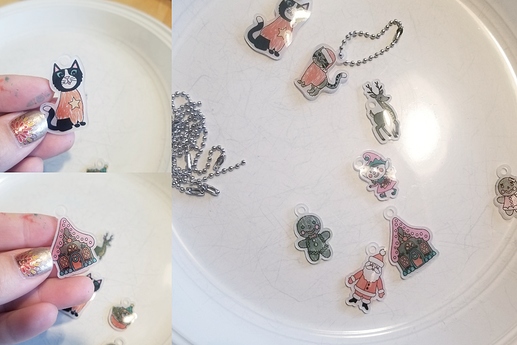 I love shrinky dinks - no matter how many times I do them, they always amaze me

And that 3d cross stitch is going to be fantastic.

@edel - lovely to see you back

Love the tree - it looks amazing

Class or Challenge Title: Hermione’s book club - C4 Flourish and Blotts
House: Hufflepuff
Project Name & Page Link: Repurposed Christmas card
Brief Description: I have been trying to practice my painting skills and had found this Christmas card tutorial on Youtube, which seemed really pretty when finished. But when done, I hated the outcome, except for the banner, which I really liked. I didn’t want to waste it completely, so cut out the elements and used them to create a new card.
Project Picture:
Part 1 - 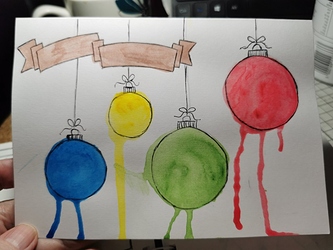 Class or Challenge Title: Book Club Ch. 4
House: Gryffindor!
Project Name & Page Link: Home Embroidery
Brief Description: My parents are moving into a new house soon. They have moved often over the years, but they love the town they are in now, and I know they’ll miss it there when they go. So I wanted to make them a Christmas gift to remind them that they’ll always be ‘home’, so long as they’re together. Nice sentiment, right? Too bad this project went so wrong at every turn! I thought I had purchased the digital file that would fit my 5"x7" embroidery hoop, so I bought a frame that said it was matted to 5"x7". I sat down to do the embroidering, and after it was done, discovered that I had actually bought the larger file, which was far too big to fit into the mat. (See below.) So rather than return the frame, I bought the smaller embroidery file, and started agin. That failed on the second letter of the design, and I had to rip out the stitches. I tried again, and it failed on the 4th letter. By that point the fabric & stabilizer weren’t able to be salvaged, so they were binned. Third time (or 4th, if you count the too big embroidery) worked, and it stitched up beautifully. Too bad the mat in the frame is actually 4.5"x6.5", meaning the sides are slightly cut off! At that point, I tried to remove the mat to cut it to fit better, but discovered it’s built into the frame and can’t be removed, so I’m leaving it like it is. My parents reframe virtually everything anyways, so I’m sure they’d end up changing this one at some point. I’m calling it done!
Project Picture:
(Too-big embroidery, against frame.) 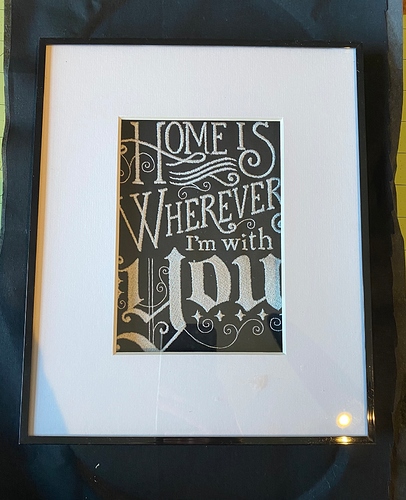 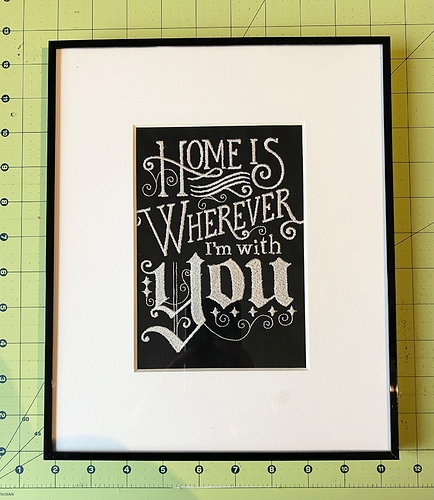