What a cool way to start off February!

Prompt: February - Hawk
Team: Knotty by Nature
Project Name: Fox biscornu
Project Link: Ring o' Foxes biscornu
Brief Description: Trying to work the back stitching and then whip stitching the edges together required a few breaks for my eyes. Good grief, I must be getting old. I think I need to invest in a magnifier, because I was going cross eyed on this one. This is for @QueenHobo
Project Photo(s): 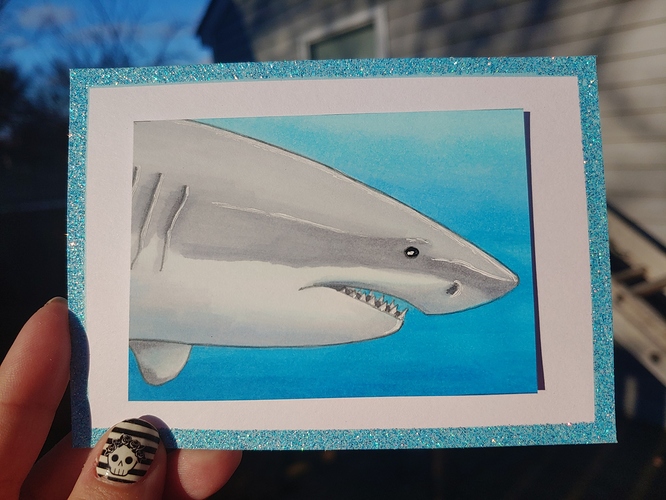 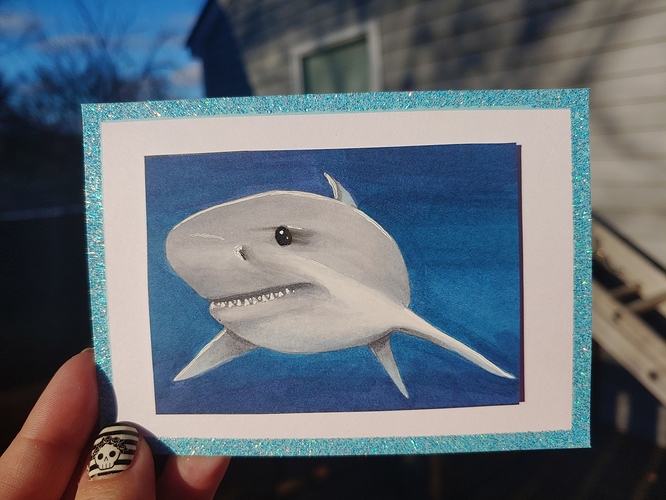 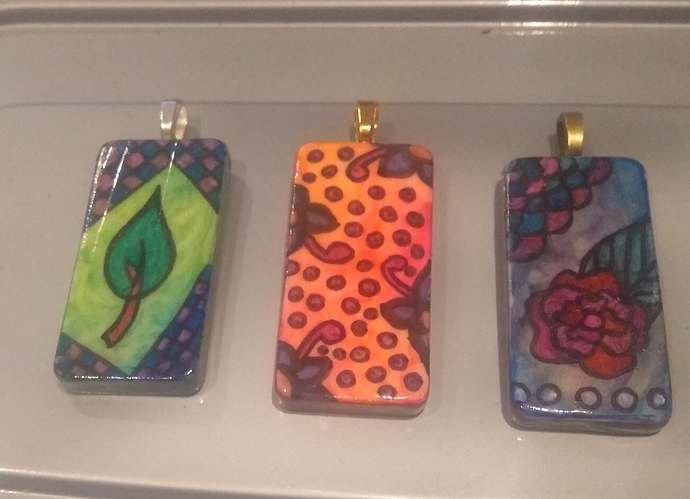 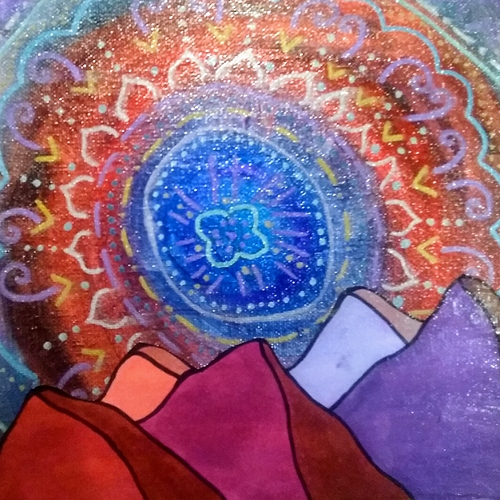 So far behind, so I will just say: AMAZING CRAFTING SO FAR EVERYONE!! What a start to 2020!!

And … tada… my first post in a loooooong time. Had to think a bit out of the box!

Prompt: Battle Royale - February - Squirrels
Team: Bits and Bobs
Project Name: Cub Scouts Core Badges
Project Link: n/a
Brief Description: *The wonderful situation of having both Twins in the Scout Organisation. They have just been invested in the Cub Scouts before Christmas, and I didn’t feel up for sewing on two sets of 5 (!!!) core badges onto their new jumpers… But I knew I had to do it, and so tonight it was … while waiting for the Super Bowl LIV to start.

You probably think “why squirrels?” Well, last year at our Leaders (yup, I’m a Beaver leader) we got the news that a new age group would be added to the Scouting Movement, for 4-6 year olds. They are called “Squirrels” and are currently getting trialled in Ireland and England. So that’s my pick for/link to “Squirrels” - doing some work for Scouts.

It took me 1.5 hours to sew these on… and they’re not straight … who thought up the whole thing of sewing them on the arms?!!* 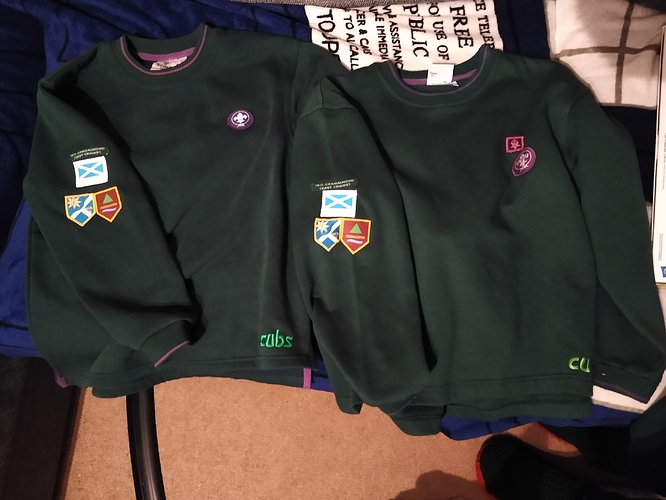 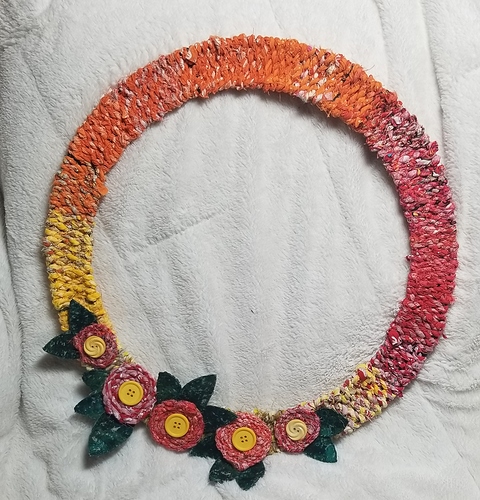 Love the bag too 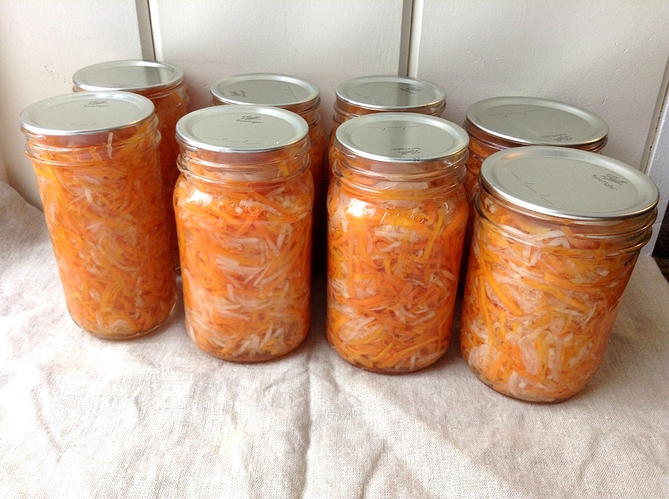 Project Name: Disreputable hoopla
Project Link: Disreputable... Dog
Brief Description: I began this piece last year, but only had the words done. I finally decided how I wanted to complete the design got it hooped up.
Project Photo(s): Blurred for (mild) language 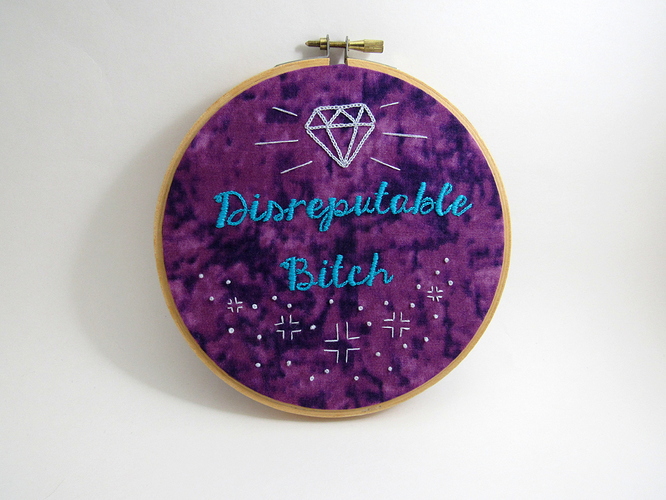 Prompt: February - Battle - Squirrels
Team: Knotty by Nature
Project Name: Owl Biscornu
Project Link: Woodland Creature Biscornu
Brief Description: I decided to use this for the battle, and put it under squirrel because I’m not the biggest fan of birds. I love owls, and a few other birds are cool, but I’m allergic to them, and I find most songbirds highly annoying. The little hedgehog on the toadstool may not be a squirrel, but I bet they could be friends.
Project Photo(s): 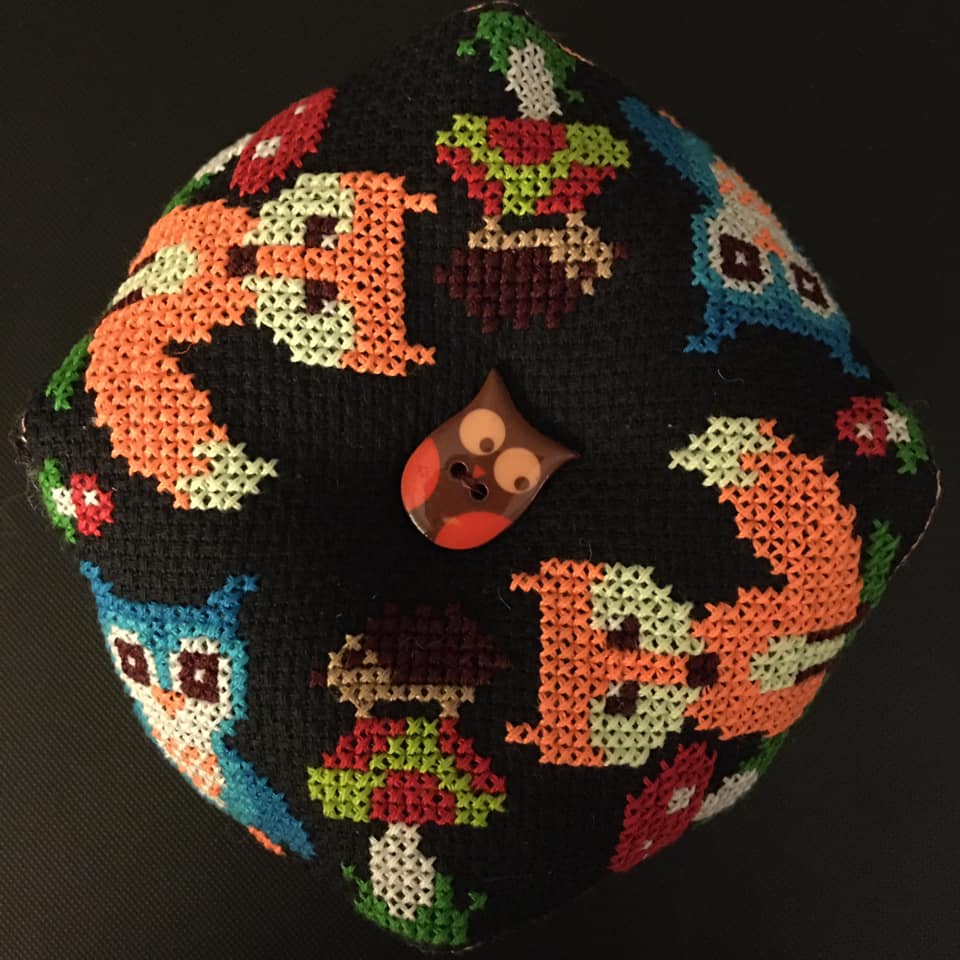 Prompt: February - Waterfowl
Team: Knotty by Nature
Project Name: Duck biscornu
Project Link: Duck Biscornu
Brief Description: This is for roler’s mom, as a thank you for being so thoughtful and awesome. I will hold onto it until roler visits at the end of the month. Then she can hand deliver it to her mom when she heads home. 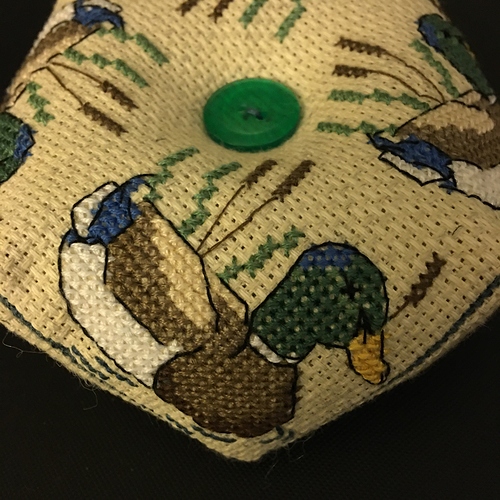 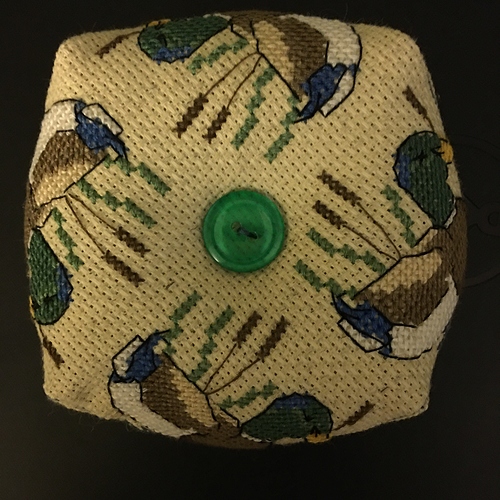 Prompt: Zap!
Team: Bits and Bobs
Project Name: *You’re a small pouch
Project Link–none
Brief Description: In an effort to use up some more scraps, I made this tiny pouch (less than 4") with a velco closure. I had purchased the fabric from Spoonflower several years ago when I hosted a Grammar

Prompt: Big Time
Team: Knotty by Nature
Project Name: Lettuce Craft cross stitch
Project Link: Lettuce Craft (with pattern!)
Brief Description: I made the pattern up for this yesterday, and stitched it up today. I spent about nine hours on the design and stitching total. If you follow the project post to the community link, I shared the pattern there.
Project Photo(s): 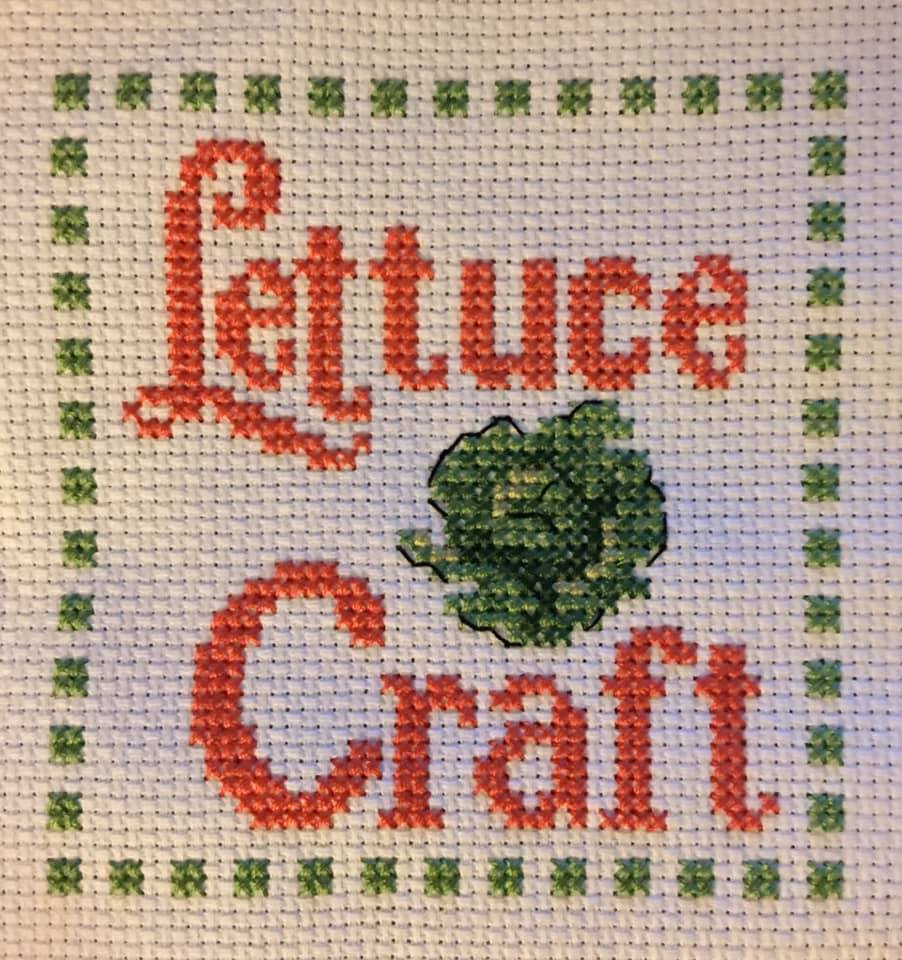 Feb battle - birds
Team - Bits and Bobs
Project name - Bird brooch
Project link - Here
Brief description:
Yay for no longer lurking!
I went to Whitby Steampunk festival today and one of the stall holders was running mini workshops on using Powertex. I’d never heard of it, but it looked fun and who doesn’t want yet another technique to use?
I made my kids sit on the floor (there wasn’t room for chairs for them, and they had tablets so were happy) while I played.
This is a very bad picture of the result

Very cool! I love learning new crafts! Do you think you’d want to do it again? Also, welcome to the games! (And my team!)

@Lynx2Lancer I bought a starter kit, so I hope so 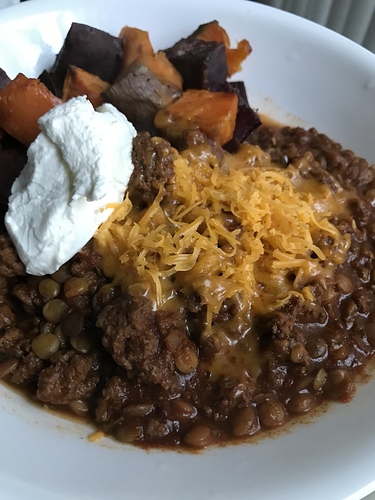 This chili sounds amazing. I also like beans in my chili… in fact, I never add meat to mine. I want to try this now. I used to be the biggest wimp when it came to spicy foods. Living in Arizona has really upped my heat palate.

I want to go to a steampunk festival! I love steampunk style. Your brooch is super cute! And welcome to the games!

Project Name: Card ornaments
Project Link: Yearly Holiday Card Ornaments
Brief Description: I hoard interesting bits like a squirrel hoards acorns! I found a good use for these cards, a way to keep them around year after year. (Link has more ornaments, these are the 3 I made this year.)
Project Photo(s): 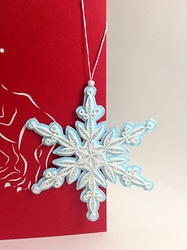 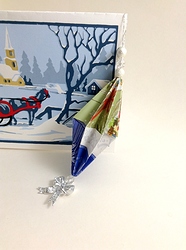 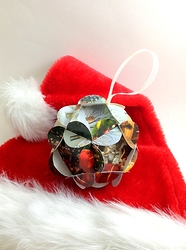 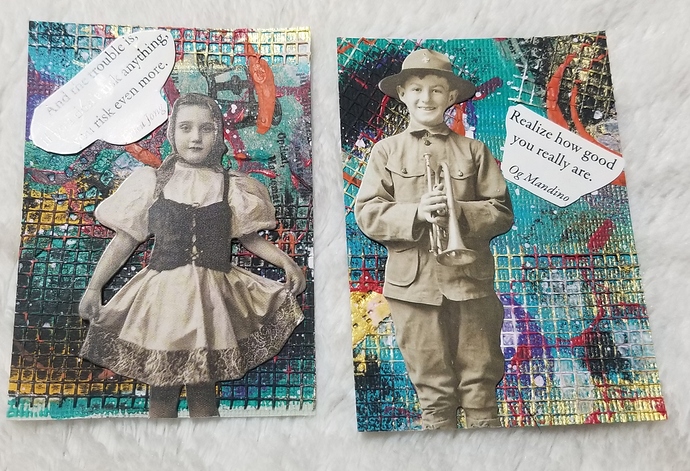