January’s stitchalong prompt is “Let’s Go on a Trip!” Originally, I had settled on embroidering the biggest place on my bucket list: Machu Picchu. But, then I decided I didn’t actually know what I would do with that, so when I found this free Puffins on Rocks Square by Downeast Thunder Farm, I knew that was how I wanted to represent the theme! 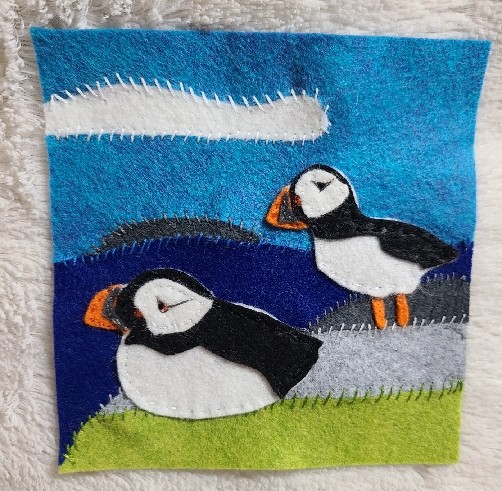 I used two techniques on this. I individually cut out the background pieces and stitched them together one by one, unlayered. I decided to layer the puffins.

I think it’s so cute! It kinda reminds me of my home state, Alaska (we have puffins there), and the idea of going on a puffin tour in Maine! (maybe with some LCers one day!) I was at Maine’s Lobster Fest a few years ago and brought home some puffin trinkets.

I hope you get to go on your trip!

But in the meantime, what a very cute piece…I love how you did the layering.

Thank you! This was fun to put together while I wait for my bird book and felt to arrive!

What a fun interpretation of the prompt!

I love it and I love puffins

Very cute! There is a ladies toilet in the Reykjavik airport with a GIANT puffin photo on the wall, so you should add that to your list!

The puffins are adorable and I like how they “pop” since the background is flat. Neat effect.

Thanks everyone so much for your kind comments!

Cute! You’ve got kind of a 3-D thing going there!