Dontcha hate when you wanna share a thing but it’s secret things until you give the things, but then YAY you can post now because they have the things!! lol.

These 2 were presents for my BFF and her daughter. We have a new baby on the way due some time in March, so I get to take great joy in taunting her with the fact that she is a Grammy AGAIN and she’s younger than me, lolololololol. My fave part of this is the heart shaped booty hole, lol. 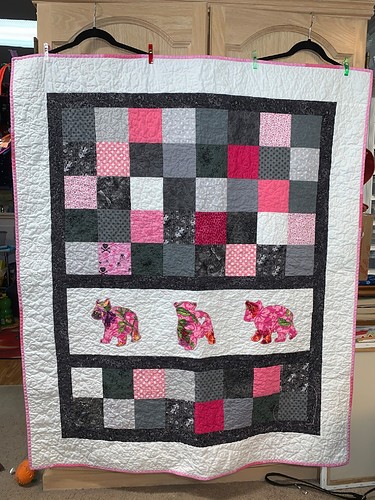 This second one, I am so god damn proud of…I’ve wanted to make it for a good many years, but didn’t have the confidence in my ability to pull it off, but I finally pulled the trigger. This is from the movie Tangled, the lantern scene. I made it for my BFF’s 50th birthday. We love the movie, and we love the ever sassy Rapunzel, but that scene means a lot to us. Her sister in law, our partner in crime, was very ill and in the hospital receiving comfort care. They were 5 states away, so we were on the phone while she was at the hotel watching the kids, as she and her brother traded off being with Kyla in those last moments. We were all watching Tangled, together but apart, and Shannon and I just lost it when that scene played…shortly after, her brother texted that Kyla had passed and forevermore we associate those lanterns with her being released from her corruptible, mortal state. When I FMQ’d the lanterns, I stitched her name across 4 of them in her memory. And we sobbed all over again when I gave her the quilt and pointed that out.

Just a little detail for anyone interested in the making of the quilt…I drew a grid with tailors chalk onto the black fabric, after I backed it with light weight, double sided fusible, to give it enough stiffness to make it easy to draw on. Then I used a light lavender thread to applique it on. Then I made the quilt sandwich of backing, batting and top, and glued on the 137!!! lanterns, with a dot or so each of Elmers school glue, and then free range quilted or appliqued them onto the quilt, using the same light lavender, to make it stand out a little more and give them some upward, swirling movement. Then black thread for the silhouette of the Village of Corona, and a darker purple variegated thread for the purple areas, so that it sat back and let the light swirls shine. HUGE labor of love to be certain, and worth every stabbed finger tip, and swear word, spoken in it’s creation, lololololololol. I’m completely over the moon with how it turned out!!! <3 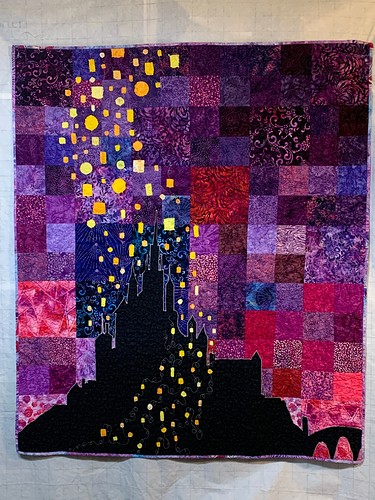 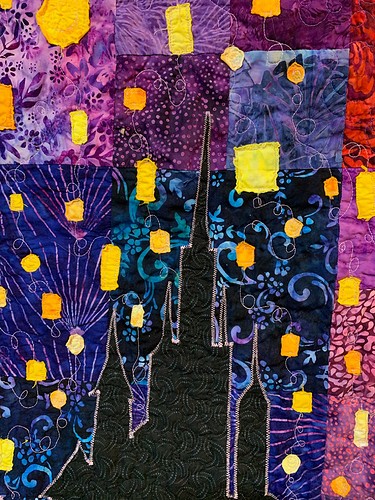 These are both FANTASTIC. So beautiful and well executed! Treasures!!

Both of your quilts are absolutely amazing!
And the story of the second one, which is stunning by the way, is so sad and yet so sweet.
You should be very proud.

Beautiful.
The colors of the first are so pretty and calm, I like the combination of grey and pink.
The lanterns quilt is amazing, and its story is so touching :hug:

So very amazing! The Tangled quilt is off the charts beautiful. You are the queen!

WOW! Both are beautiful but the second one is absolutely stunning. Loved your story behind it too. All that attention to detail is totally worth it.

Gorgeous pieces!! and thanks for sharing your process notes too. That is a lot of work …and a lot of love.

My jaw literally just dropped looking at these. Both of them are absolutely beautiful treasures!

Absolutely stunning work on both quilts!

The lanterns are so striking, especially against the gorgeous background colors. Amazing!

Your sah-weet projects are one of this week’s Featured Projects!

Your sah-weet projects are one of this week’s Featured Projects !

I love the colors of the bear one. I am a huge fan of pink so that gets me every time. The bear silhouettes are adorable.
The Tangled quilt is absolutely stunning! The sky in the background is so beautiful. I teared up reading your story. Thank you for sharing.

Love them both. Thanks for sharing your stories

Beautiful quilts. My granddaughter and I love tangled.