I hope this goes here??

Boy, was that some busy weekend for me!! I had a wedding and a baby shower that weekend, wedding at my girlfriend’s house (her daughter getting married) was Saturday, baby shower for my first grand daughter, Sunday (up to that point, I had 7 grandsons)!! I had just about finished with dressing up the two huge swans that Sunday morning. I had promised to have them ready for the wedding. I was really cutting it too close! The swans were HUGE, also a bride and groom, were gorgeous wrapped in tons of black and white satin, when…seems to me…like two seconds after I finished them, they got picked up, and boy was I relieved because I had to fly out the door right behind them to make it to my hair dresser then rush at warp speed to the store to pick up my new tailored dress.

Next day I was really hung over, not from the wedding, well, maybe a little (the wedding, btw? Was truly beautiful!), still, I was really worn out from all that rush work I had to get done on the Swans! I never thought I’d make it, and I really felt it the next day, more. I lazed around all that morning even tho I KNEW round two was barreling down on me like an enraged bull. 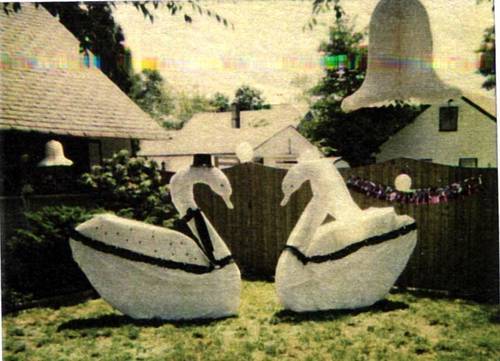 Long story, short, I made it thru that weekend and actually was pretty pleased with what I came up with. I had decided to make a bassinet shaped like, naturally, a stork! You just KNOW I had to create something special for my very first grand daughter! By the time I could wake myself up outta zombie mode, I had just 3 hours left to do it. No time for shopping for what I didn’t have. Just had to make do with what I had! And, I had wood, I had fabric, hot glue gun and plenty of screws. Put them all together and the stork, emerged 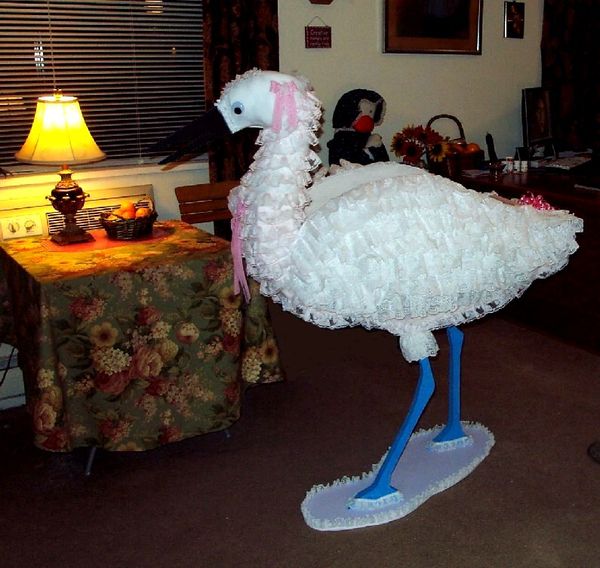 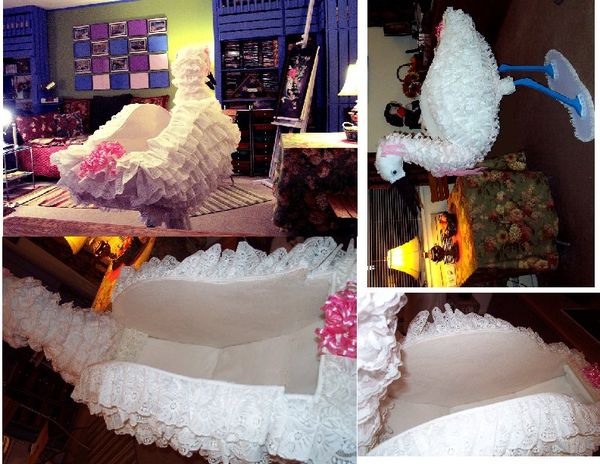 Funny how they both were birds!

wow–pretty unique projects! I think the swans are amazing! Unique for the wedding for sure!

The bassinet is lovely and looks sturdy for a small one…congrats on your first granddaughter! As she gets older, the stork can be used to house her toys!

Both of these projects are show stoppers!

Those are all stunning and beautiful!

Thanks folks! These were fun to make and generally come outta the blue, meaning last minute projects and was not prepared for them. I like the ones I am prepared for because I have more time to get creative.

If I ever need a giant anything, I know where I will go!