Sort of subletting time in the stash.

They’re there just long enough to get the others on their feet and moving.

I’ve made it just about halfway through my fabric inventory. I still have three drawers, two shoeboxes, and all the fabric that doesn’t have a home. And the Christmas box. So, maybe halfway is being overly optimistic. Sigh…

I ran the numbers for everything I used up last year. I produced 40g of thread ends (which can now be discarded - I don’t even know why I keep track of them), 7 spools of thread, a pack of sewing machine needles, a disappearing ink pen, 1 spool of quarter inch satin ribbon, and 6 rolls of washi tape. If my calculations are right, and I am pretty sure they are not, I also used around 15 yards of fabric, all but three of which would be from stash. However! I am really skeptical about that last stat, honestly, and need to run the math for a second third time.

I stopped at your

I don’t want to even think about what the weight of a years’ worth of thread ends for me would be!
I’m already problematically mindful of all types of crafting waste (dress/ garment/ homewares making) and their potentials for being used ‘somewhere’.
I do admire your record keeping though!

I’ve been analyzing my yarn stash the last few weeks. There’s not really anything I would like to just be rid of - I want to use it - but, so many things didn’t have an intended project (a lot did at one time, but plans were abandoned). So, I searched Ravelry for patterns to match stash and got almost everything assigned to a pattern, and then queued it all up.

Last night, I cast on a stash-busting throw that should use up a good chunk of my sport weight cottons. 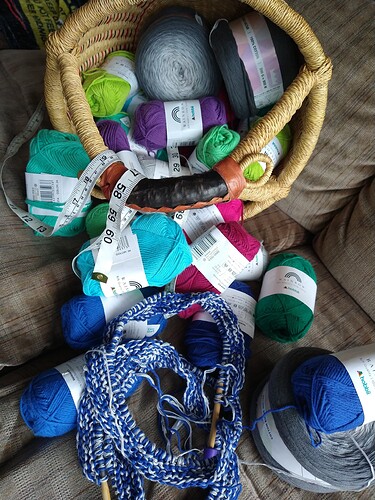 I’m so impressed that you found patterns for all your undeclared yarns! That’s always my downfall. Good for you!

Not all, but most. It might take a couple years to get through it all, though.

Why is yarn soooo pretty?!

What a great idea! I have used Ravelry’s pattern search before for random things, but I know you can put in yardage and type of yarn as well.

I am going to get some large ziplock bags to sort pattern and yarn into kits. It would help when I don’t know what to make. Maybe I will do a few patterns for each yarn…oh boy, a big project for sure!

I love the 2 gallon ziplok bags for projects. I haven’t seen them in a while, but i think i used to get them from staples or the like when I was a production manager.

You can get them from Target. I buy them regularly for storing all kinds of things when I’m doing a pickup order.

I also need more totes to hold this ongoing projects…lol…

Storage is a huge issue for me; I just bought a new 12-cubby storage unit, to add onto my existing 20-cubby unit. The 60% increase in storage was filled immediately–almost entirely fabric and sewing related; beads, buttons, paints, paper, resin supplies are all stored elsewhere (on the floor, on the tables, in a drawer unit under the table…)

But I had a revelation while cramming stuff into cubbies…

Genius, huh?
So I grabbed the bulkiest thing–a big bag of cotton batting–and used it as intended, to cover my ironing board.
Then I went on to another bulky item, a big piece of eye-searingly bright yellow-green fleece. Today, my legs are warm, and I won’t get lost in traffic. I have one other piece of fleece big enough for pants, so that’s on the list for today.

Next up is the flannel cubby; I could use some warm tunics…oooh, if I made them reversible, it would use twice as much fabric!

So true, and so motivating!

Since I’m on a no-buy this year, I’ve declared that everything craftable is stash, even if it arrived on Dec. 31 2022. So technically I’ve been making tiny inroads into my sticker stash, although I’ve been using more recent acquisitions in addition to some that have been hanging around for a couple months. It’s not anything I would normally share here, but I used up two whole sheets! Woohoo! Only 314,159 to go. 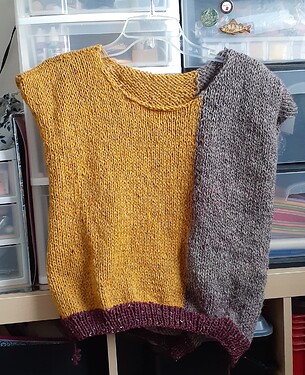 I’m following the Mondrian Pullover pattern, and I kept thinking I was not going to have enough of the yellow yarn to do at least the back and front. I literally have yarn in an Amazon cart waiting for me to push a button. Joke is on me though, I finished the front and back and still have a big and medium sized ball leftover that should definitely be enough for two cuffs.

So far this is all from stash and I’m going to incorporate another yarn in stash as well! These are not colors I would have chosen to put together if I was shopping, but it’s growing on me.

(Also first time for instarsia too!)

I like those colors together. I think a bit of odd coloring adds to the charm of that pattern.

I feel you, though…I had 55 skeins of yarn in my shopping cart to make a shawl and at the last minute, realized it was going to be over $100 and I had every color I needed in my scrap/small amounts basket! It won’t be exactly like the pattern, but, that is a good thing as well.

Restraint! Good for you!!!

I have made a destash decision…

I have 2 large RUBs* full of denim. Y’know how it is when you aspire to making something and let the word out and get everyone’s dead jeans… that happened.

I made a quilt out of a bunch, but I have loads of denim left that is sitting there and has been for a long time. I need to set it freeeeee.

The decision feels good, now to action it!!!

I love those boxes! I use smaller ones to organize tons of different craft supplies.

I have various sizes to try and organise, but the denim kept on coming and has not been used in years.

There are many WIPs hanging around that could be neatly tidies into these boxes!!

They are great though

Go you!
I’ve been destashing for the past 2 years, mostly without buying new yarns or fabric, and this year I am determined to create a new wardrobe of clothes for myself and a friend with the fabrics we’ve each previously purchased.

Currently, there are 17 similarly sized, rectangle shaped containers, down from 21, filled with relatively well sorted fabrics and yarns. There’s a few more smaller boxes of fabric in the craft room. Mine are grey/blueish to avoid light fading the contents. The smaller clear ones hold stuff that won’t fade.

Since using so much yarn stash last year, I now need to reorganise and re-label the boxes (and take updated photos) for ease of searching.

I should make a definitive list of garments, with patterns, I want to make and the fabric to use to do that, then take photos, instead of just thinking about it.