Ds #1 had a large project for school in which he had to research a planet, put together a slide show with facts, construct an alien to live on that planet, and write a story about said alien. We thought everything was going hunky dory – he had made a clay alien last weekend and we were just waiting for it to dry so he could paint it. Well… we picked it up Thursday and all the legs fell off. I tried gluing them back on, but then the rest of it just crumbled. Yikes. And the project was due on Friday! Obviously we didn’t have time to make another clay alien and wait for it to dry, so the fastest thing I could think of was to sew it.

Stash to the rescue! I had just the right colors that he needed. I drafted up a pattern based on the original alien and then ds#1 and I set to work! I wanted to make sure that this was his project and that it would be obvious that a 5th grader and not his mother had made it. He got a crash course in how to run the sewing machine and he was off! I stayed to supervise, troubleshoot, and refill the bobbin as needed. It took us 5 hours, well past everyone’s bedtime, but he did it and he is soooo proud of himself (as he should be!). And I’m proud of him, too, so I wanted to show off his work. 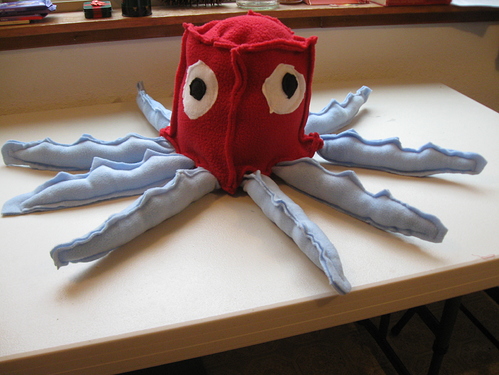 What an awesome alien! and what a great learning experience, too.

He made an awesome alien! Nice sewing skills.

That is one fun alien! That sounds like a neat school project!

That’s so cool! I hope it has given him a lifelong love of sewing.

I love it! I made me tear up because I remember making a Pawnee Native American Tribe mud hut with my dad for a 5th grade project.

That is an excellent first project! Impressive!

Well, that was quite an exciting story! And it ended so well… WOO! Congrats to your 5th grader for taking so quickly to sewing and sticking to it under duress! I hope we get to see some other sewing projects from your DS#1 in the future.

It looks impressively big too! He must’ve been so proud to carry it in to class.

What a cool proje t! And hopefully now he has a love of sewing! Thanks mom!

Huzzah! Translating 2d drawings or your own thoughts into a 3d object is a big brain task. It stymies many. Success! Great job!

Thank you so much, everyone! I showed him all your comments yesterday and he was just pleased as punch!

@steiconi I hope so, too! That evening he was having so much fun that he was already talking about sewing more stuffies! I mentioned to him that he could sew a stuffed frog for his little brother for Christmas and he is very excited about the idea.

@susieoregon What a neat memory!

It’s a lot bigger than I thought! I hope he found a love of sewing, he has skills!!!

That is positively adorable!! Well done to him!! XD

I love to hear that he might keep creating! I’d love to see his next projects if he feels comfortable sharing. He did a great job!