For this monster, the idea bounced off My Little Snowman Creation that I had made a while back.

I had some random things laying around my room that helped create this creation such as yarn, paper clip, a mini surfboard I had etc. …

… and TA DA! My creation was born! 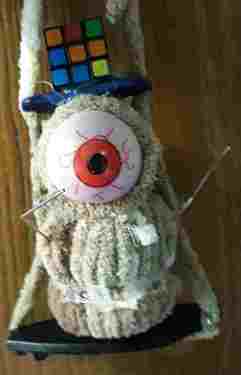 Here’s the back of my monster: 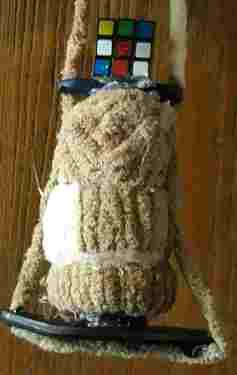 I took empty, carboard washi tape and wrapped some yarn around to create his body. For his arms, I still used a paper clip but I made holes in the cardboard and poked it through both sides (this is before I wrapped the yarn around).

His head, however, was a bit different from his body. I had this small eyeball ball. I had no plans for him until this project. I cut the eyeball thingy in half and hot glued one half to the front of the cardboard and wrapped yarn around. As I was reaching the end, I realized the back looked empty so I took the back of the cut eyeball thingy and glued it to the back before finishing wrapping it with yarn.

I, then, added the hat that I made out of a erase and rubik’s cube before gluing all the parts together then gluing the monster onto the mini surfboard that I painted black.

During the process, I had this repeated idea to make him into ornament, which was unlike the snowman, and so I took some more yarn and made an ornament.

My family was creeped out by my creation but I really like my monster!

You had me at eyeball…also, that hat…so creative and yeah, a bit creepy, but that is good for a monster!

It’s a one eyed, one horned flying purple people eat…, oh wait, just one eye. Not purple, I guess it could be flying on the surfboard (hoverboard, perhaps), but surely you did not create a people eater!!

My favorite part is the Rubix cube.

That is fantastic! LOL, I just love that face!