This is the biggest painting I have done!

I had chosen to paint scenes from Cassandra Clare’s Shadowhunter series. Mostly because I wanted to try out this bigger size and didn’t know what to do and I had been drawing scenes from the books anyway and it just lead to this. 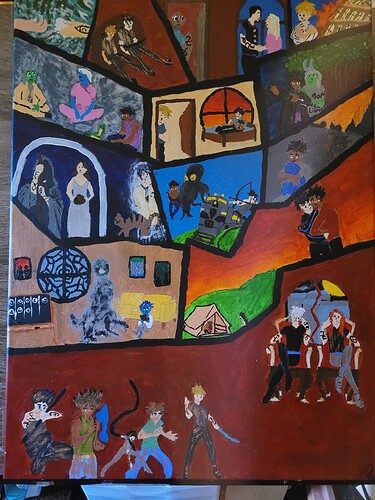 Scenes depicted, staring from the bottom to the top:
Bottom: scene from City of Heavenly Fire (when they face J.M.)

This painting took a long time and I got something new to me! Tracing paper! All or most of the characters in the painting I used tracing, modifying them once they were on the paining. 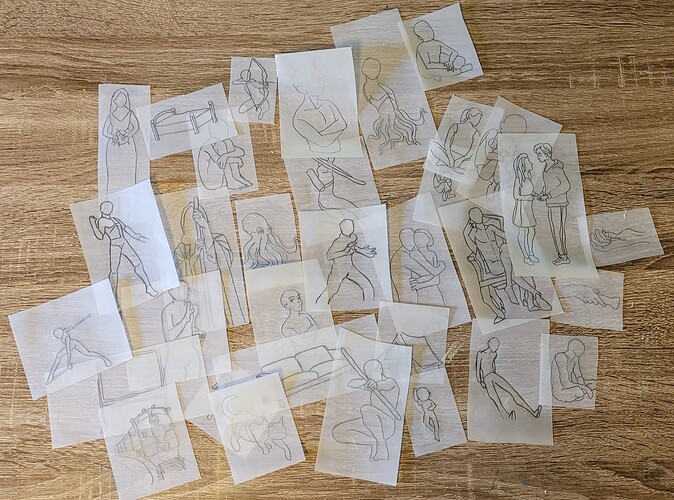 These are all of what I used.

My favorite thing that I traced was the armless creature on row 2 left. I used an octopus’ legs and a human torso for him(it’s actually how he was depicted in the books).

My favorite scene on the entire paing is in row 3 middle, scene from Heavenly Fire. I just love the way it turned out and yes there is an octopus there but in the book there was an octopus-like demon thus the octopus.

I love it! It turned out great! Now, I need to restock my paint, heh

It was so much fun watching this masterpiece take shape! You put so much work into it!

Did you draw the images yourself on the tracing paper, or trace it from some else?

Remind me: How big is this canvas?

I traced the image from a screenshotb I took on my phone.

The size? I don’t really know but I measured and it ended up being almost 18 inches wide and 23 1/2 inches long.

This was a lot of work! @Bunny1kenobi and i used to read these books and watch the series. You pocked some cool scenes and dramatic poses. The painting has a lot of movement! Great job!

Wow, I’m amazed at how many different scenes you depicted in your painting. It’s wonderful! I can tell you put a lot of time and thought and love into it. Congrats!

Whoa, this is awesome! How do you transfer the images from the trading paper on to the painting?

The cool thing about tracing paper is that it’s transferable. I’d trace the image from my phone then flip it to trace the other side to transfer the image to the canvas.

What an ambitious project! So much detail in each scene! Now you will have a collection of your favorites to remember the series…also, such an interesting way to do the characters. I am not good with figure drawings so this would be a good way to at least get them started.

So proud to watch you style and techniques develop over the last few years!

This is so awesome!! Love your homage to the many wonderful characters and stories in this series!

Wow!!! Crazy cool! I love these books and this is an awesome representation! You got a lot in there!!!

What a creative way to depict scene from a beloved book! Very clever and such an ambitious project to finish!

What a colorful piece that I’m sure you’ll treasure for a long time!

Your wonderful craft is one of this week’s Featured Projects! Congratulations!

I don’t know the show (books? movies?) but I see lots of tentacley things and they look very cool! Nicely done, good technique. I like those problem solving skills when it comes to getting your idea out of the mind and only the material.