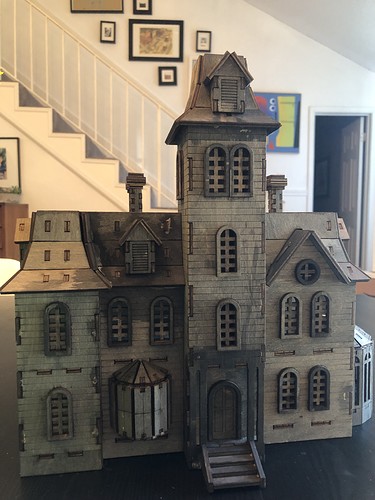 Morning! I am working on making houses/miniatures from movies that are important to me (from my childhood) to have displayed on my buffet table. Most movies with recognizable houses/structures aren’t necessarily Halloween-ish movies, but they seem to fall under that net (kind of). So, I’m thinking of only displaying them in the fall (we start putting up Halloween decorations around my birthday in the middle of September) and packing them away after Thanksgiving when we pull out Christmas stuff. 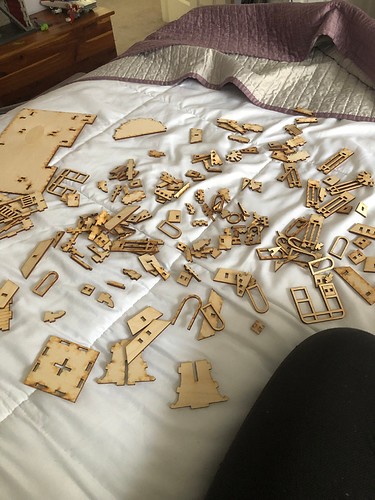 I bought the structure/laser-cut balsa wood from Etsy. The seller is no longer on Etsy, but his website is www.birdswoodshack.com. Make sure you give yourself time to receive - I’m sure that he doesn’t bust out his CNC until he gets an order. Be aware - these models are definitely for patient adults who like puzzles and can build with limited instruction that is set up like Ikea instructions/LEGO (but more simplified). My seven-year-old is amazing at LEGOs and regularly builds structures intended for teens/adults, but he didn’t have the dexterity for this, though he was a big help regardless. I recommend testing the fit, etc., before gluing the pieces together. Once I got the hang of it, though, it went pretty fast and was a weird combination of challenging and soothing. Also, I always feel like I’ve accomplished something when I have glue/paint under my nails for a couple of days. 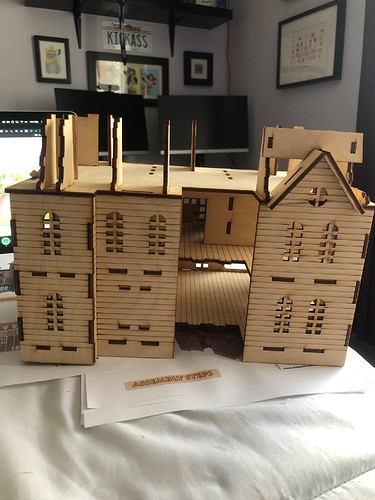 Once it was all built, glued, and dry, I painted it with watered-down black acrylic paint so that you could still see the balsa wood underneath and to give it more of an aged appearance. It worked great! The pic isn’t perfect, color-wise – it’s a bit more grey/slightly darker in real life. I do like that the paint “took” more in some places than others - it really gave it the appropriate creepy vibe. For the future, I am going to paint as I go–getting the inside painted was a huge pain in the butt. 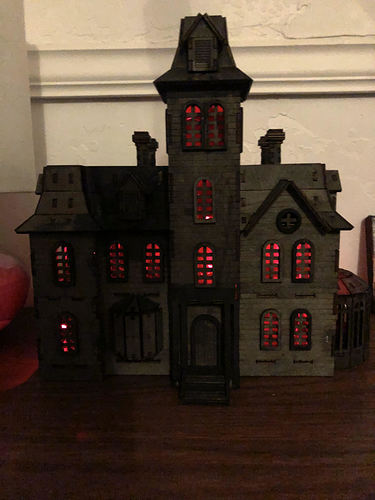 finish3024×4032 863 KB
I added some battery-operated red lights to the inside so it would glow at night, but I feel like it’s a bit too menacing for the Addams. I’ll probably add some soft white flickering tea lights, too, to offset it a bit.

Overall I’m super happy! I’ve already got a few more houses headed my way from the same seller. Next up is Coraline’s Pink Palace, and I’m going to attempt some surgery on another iconic house (that doesn’t really resonate with me) to turn it into Elvira’s. Eventually, I will attempt the hedge maze from The Shining and something from Poltergeist and Beetlejuice, but those might be next Halloween.

What a fun decor item!

OMG! This is soooooo coooooool! You’ve done such an amazing job on this.

And so coincidental: I just started watching a bunch of YouTube videos of someone who did a fully loaded Addams Family dollhouse, because I have an Addams Family-inspired project underway.

Holy macaroni! This is absolutely amazing!

Mysterious and Spooky!
We just watched the first couple of episodes of the Addams Family on TV. That show is still funny!

(changed ookie to spooky so it doesn’t sound like I’m dissing your creepy house.)

Is it Bentley House Minis by chance? I have been binging her stuff lately, myself!

Excuse me while I PICK MY JAW UP OFF THE FLOOR! Mercy I’ve gone back and looked at the pics 712 times!

Holy moly!! That is truly fantastic!! I’m swooning over here!

This is awesome! I’d be so tempted to add some climbing vines of blood red roses somewhere for Morticia to tend.

So she can raise a lovely crop of thorns.

This is absolutely amazing!! I love it

Another Addams Family fan here. Watched it every day as a kid!

I absolutely adore this! Great job, you!

CONGRATULATIONS!!! Your cool craft is one of this week’s Featured Projects!

A-mazing! You did a spectacular job on this (especially after seeing all the puzzle pieces it took to put this together!). Your paint job is perfect. I’m looking forward to seeing more of these creations!