For the past two years, I have taken part in an Advent swap, which takes place throughout the year. Each month you swap with someone different and you swap 3 small parcels, each one containing an ATCoin (in 2019 it was a twinchie) and a small gift (some ribbon or gems or washi tape, for example) and numbered for a specific day. When received, you don’t open, but put aside until December. Then, like a traditional advent calendar, you open one parcel each day throughout December.

I did not want to share these as I made them, as I am not sure whether anyone in the group I swap with is on this site, but now that the 2020 swap is over, I can share the ATCoins I made. I made them in sets and made sure that each partner did not have duplicates from the same set for the 3 days of that month’s swap.

I called this set the medallion set, for lack of a better name 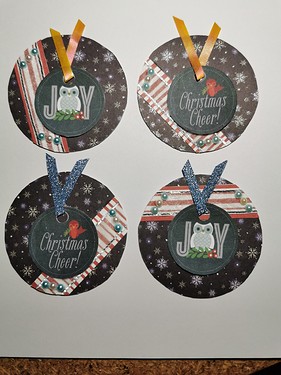 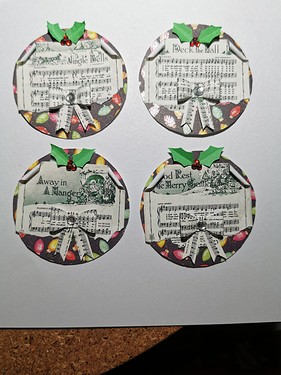 These owls and robins came from same wrapping paper and they were to cute to throw away. The glitter looked less “in your face” in real life

I had a number of different trees in my Christmas crafts box, so created a tree set 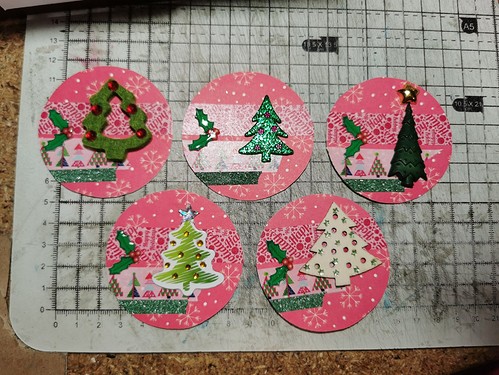 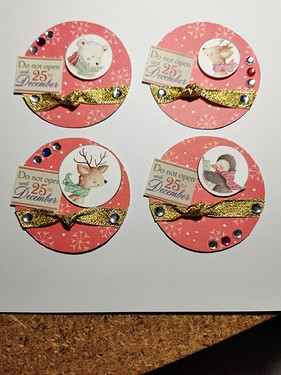 And the words set, using some little tags from a book of Christmas images

I added the numbers to the coins just prior to sending, as I did not make all the sets at the same time.

Each day had a little bag, containing the ATCoin and gift. I found this advent calendar, containing the bags, numbered stickers and pegs in the January sale. I added the paper decoration and made the tags. 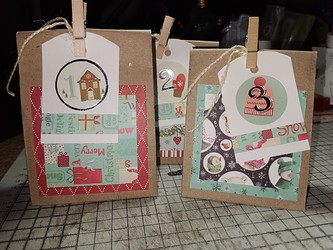 This year it is back to Twinchies. I loved creating the ATCoins, but without a 2.5" circle cutter, cutting out Twinchie backgrounds is so much easier

Sounds like a fun swap!
And your ATCoins are beautiful!

That sounds like a really fun swap! Those wee music note bows have me dying!

How fun! What a great way to keep the Christmas spirit all year. They all look great but the music ones are my favorite. I really like that you curled the edges instead of trimming them off.

Oh, I love this idea! I love all the little medallions you made, especially the music sheet ones!

I love all the styles you came up with. This sounds like a really neat swap with a fun payoff at the end of the year!

That is so clever! I love this idea. They are so sweet.

Really cool! They make me want to bust out the paper crafting supplies.

I love all the variety here! Those owls are killing me.

These are fun and festive!

How fun! I love how you made them all so different!