Hi all! I’ve been going back and forth on acquiring my first rigid heddle loom, and I figured I’d see if there’s any expertise in the new forums. My current plan is to go for the Ashford below, because of its ability to also act as a warping board: 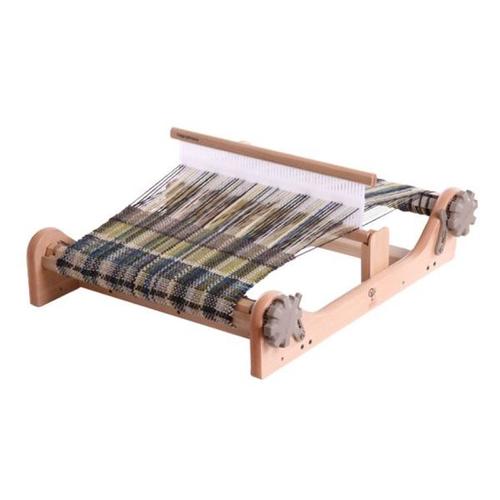 Shop The Woolery for the complete selection of Ashford Rigid Heddle Looms.

Any experience with this loom, or other recommendations for a first loom? My main motivation is to be able to turn handspun yarn into usable objects faster - I love spinning, but only really knit in spurts. I don’t want to go too crazy for my first purchase, in case I don’t love weaving, but I don’t mind going for something more than the absolute cheapest option. Thanks!!

I can’t give any advice, since I’m kind of in the same boat as you. Interested in trying, but not wanting to go crazy. Last year I picked up some of the Martha Stewart weaving boards, that can be linked together, when they were on clearance from Lion Brand. I did a few small projects, but I haven’t tried linking them up to make something bigger yet. So basically I’m here to listen in on what anyone else has to say to your question.

I bet @meleriffic can help.

I’m interested too. Mr. Magpie is a fan of woven things and any craft my man likes and wants for gifts/home decor is a craft I want to learn how to do more of! It’s so encouraging. Or enabling. Whatever

This would be a great gateway drug starter loom. Most weavers quickly end up with a herd of looms and some stick with their rigid heddles. If you’ve never woven before I think this or the Schacht cricket are great choices.

I asked for a rigid heddle loom for my birthday a few years ago, but instead of buying me one, my husband decided to make one for me. I was considering both the Schacht Cricket and the Ashford Rigid Heddle when I was looking. They’re both great introductory looms, but the Ashford Rigid Heddle seemed more versatile to me. Make sure when you do buy one that you get the right size heddle (or reed) for the warp yarn. It looks like this one comes with a 7.5 dent which is for DK or worsted yarns.

I’m excited for you to get a loom and start weaving and can’t wait to see what you make! Trust me, it is so much faster and more satisfying to whip up a woven project than knitting and weaving can show off some spectacular yarn colors and qualities, especially some uneven handspun with slubs for more variety.

Don’t hesitate to reach out if you think I might be able to answer any other questions you might have.

I have a rigid still in the box, I am thinking I’ll take some classes before I decide to open it or sell it.

I have so many toys, both addi circular knitting machines, erlbacher speedster sock machine, flatbed bond knitting machine, heavenly hand spinning e spinner, kiwi spinning wheel, a table loom I got at a thrift store, and the rigid in the box. Do NOT want a larger loom.

I think the rigid is an ashford.

Thanks for all the feedback! Sounds like you had the same thought process I did @Kwality570. I do all different crafts, so I like things to multi-task whenever possible. I’m literally in the middle of working on the budget with my husband right now, so should be able to pull the trigger soon!

Something to keep in mind about the Ashford rigid heddle looms is they are unfinished so I think you need to apply your own finishing (ie oil) to it. I assume not a deal breaker but thought I’d point it out

I did not realize that, so thanks for calling it out!

Sorry, I didn’t see that my name had been tagged in this thread.

My thoughts on the different rigid heddles are this:

First it really is a preference thing between the three major brands, though some have different features than others.

Ashford: They are less expensive. They come unfinished so you will have to put a stain, add wax, or finish it in some other way. Some people do not like the plastic pawls for turning the warping beam and cloth beam. Doesn’t fold unless you get the knitters loom which ups the price point.

Shacht: They are made in the US (which is a big pro to some people). They can’t be used as a warping board. While I am not sure about the cricket, the flip tends to be heftier (made from harder wood). My previous loom was a flip. It worked fine, but the other looms will also weave fine. The flip comes with second heddle blocks built in but I think the cricket doesn’t have that (I could be wrong though).
Can fold to take up less space.

Kromski: I have heard that it has softer wood. Some people really like the magnetic pawl system (they say it tensions better). In my opinion the harp forte is the prettiest of the rigid heddle looms. They have recently come out with walnut stain ones available and if I ever get another rigid heddle loom this is the one I will be getting (for purely aesthetic reasons). The harp forte also can be used as a warping board. And I believe the pegs come standard and are not a separate purchase like on the Ashford (I could be wrong though).

One thing you need to consider is size. What kind of things do you think you want to weave? I had the 20” and I would not have wanted smaller because I wanted to weave towels, shawls, etc. If you get a larger size, you may want a stand.

Perfect timing! I was coming here to ask about this! I wish I had my old friend Doug around. He’s a professional artisan weaver.

Some really great info here. I’ve been half-heartedly intending to get myself an Ashford rigid heddle loom, but I hate buying stuff retail. I started on a rigid heddle loom that was essentially four bars and a heddle, from some 1960s craft kit, and it was definitely one of those situations where having decent tools can make or break your desire to pursue a craft. A couple of years ago I borrowed a friend’s Erica loom (another vintage craft loom, but orders of magnitude better) and I really actually enjoyed using it.

Then this spring I found a Harrisville Easy Weaver A at a church rummage sale for $5. It’s just so narrow. I haven’t used it yet, but was thinking about warping up a plaid scarf with some stash worsted and see how it goes. It has gotten good reviews online for a beginner loom.

I just ordered a second heddle for the Flip. I love that it has this option because a heddle is a lot cheaper than another loom