Are You Ready for Some Cornhole!?

I made the smaller parts of a cornhole set as an xmas gift for a friend who is excited to build her own cornhole boards in the next few months. 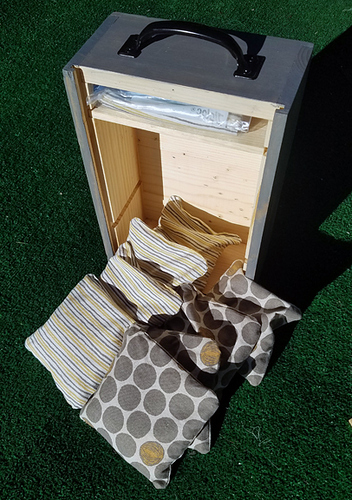 This project is a two-parter!

Part 1:
First, I made eight 16-ounce corn bags using fabrics that match her house, because when she was telling me about how she wanted to paint her set, she said she wanted to match/coordinate with her house. You can see her yellow front door through the storm door. 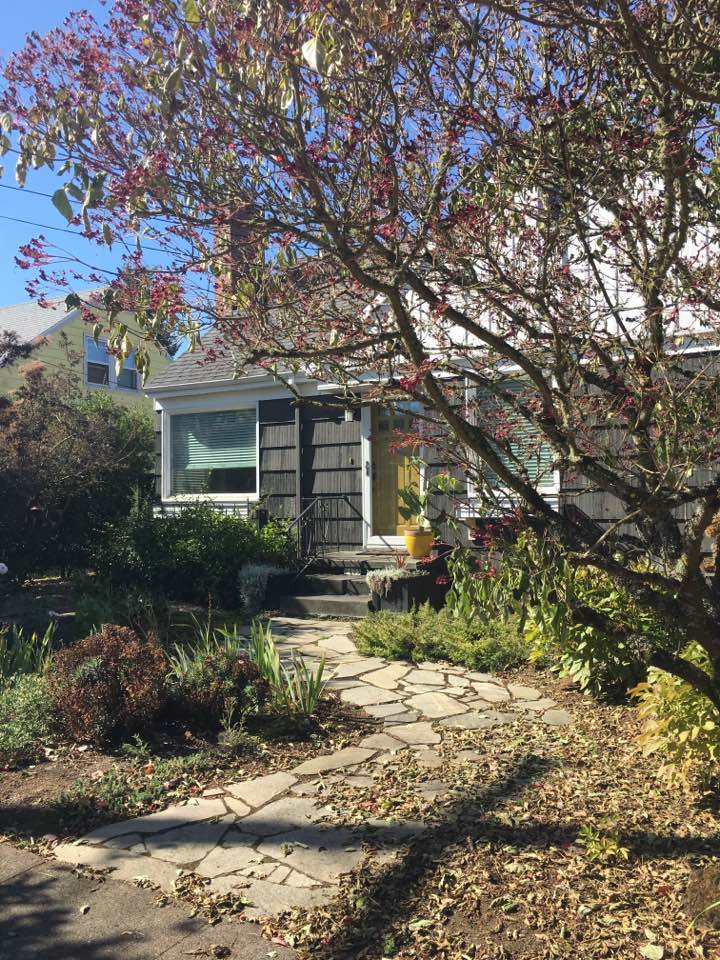 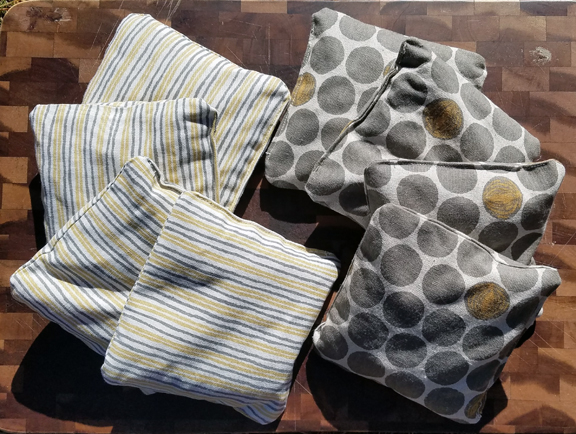 I ended up using “all-weather” filler for the bags, as designated by American Cornhole Association for official play (well la-de-da) which are these corn kernel shaped and colored plastic beads! As many people who bought these mentioned in their comments, I received more than needed/promised. I also ended up making an extra bag in each of the fabrics, so I put together a little cornbag first aid kit to include with the set. 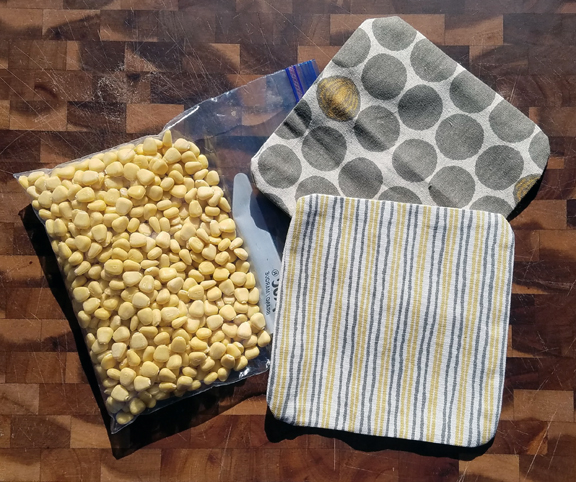 Before I had decided to use the plastic beads, I had spent A LOT of time trying to find an appropriately sized pest-proof container that could hold the weight of the set (almost 9 pounds with the first aid kit) that was also not quite costly. When I realized I didn’t have to worry about varmints getting into the corn, I remembered I had a few wooden boxes - the kind that holiday gifts from vendors come in - in my stash! WOO! And this one was a great size! 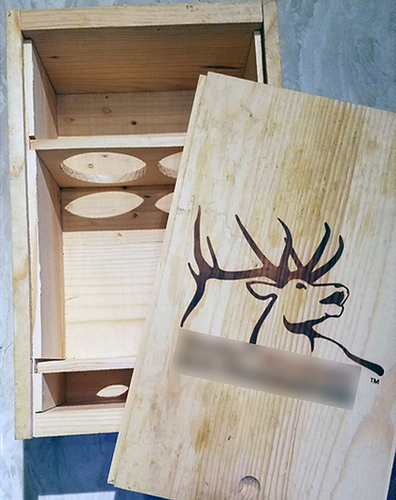 I was able to sand down the pyrography logo with 80gr sandpaper, then use grey stain and clear varnish I had on hand to dress up the box a bit. YEY! Then I added a handle to make it easy to tote this small, but heavy thing around. 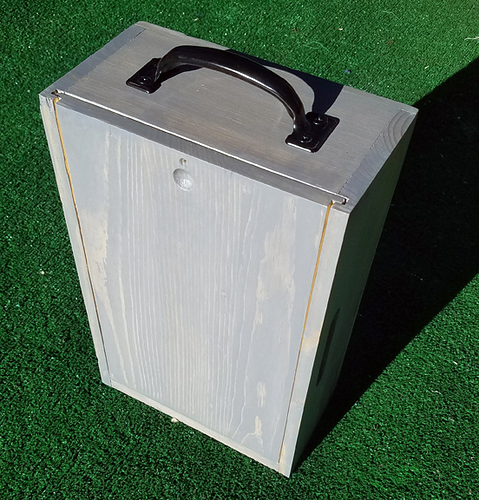 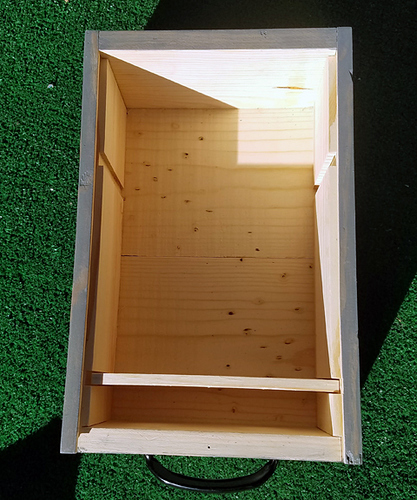 I left one of the dividers in the box, because the little first aid kit fit nicely in there. 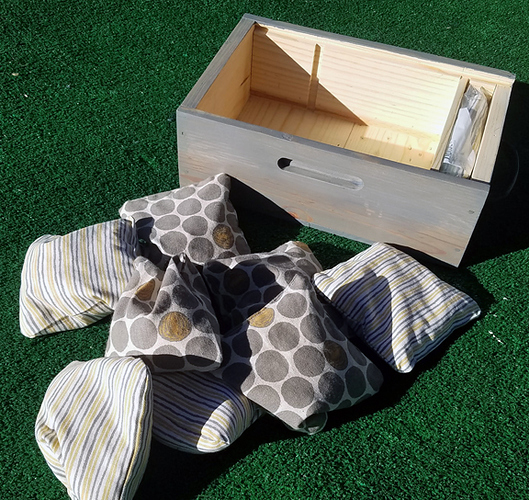 Sorry about the harsh shadows! That’s just how it is going to be now that the sun is low in the sky all day here in Montana.

The colors are lovely and everything is so well done. I l love it.

That turned out really great! Love the coordinating colors.

Just wanted to highlight this. So many questions.

And lovely work, too. Perfect box with the handle.

Just wanted to highlight this. So many questions.

OMG! It’s even more EXTRA: there are two, seemingly competing, “official” cornhole organizations. The one I mentioned claims to be the original, soooo…

I guess that means there is higher-stakes competitive cornhole? 7 years ago I didn’t even know the game existed (I knew about bag tossing games, but no one where I’m from called it cornhole until recently, with reluctance, and it wasn’t a common activity) and I really didn’t know it was a big enough thing for associations to form around it. I learn something every day (ETA: looked around the internet, found out just how out-of-the-loop I am)

What a thoughtful handmade gift

It is a really popular game…

How nice that you made the bags and box to match her home…love the fabric!

How much do you think it weighs? Have you tried Parcel Monkey? They seem to ship a lot cheaper than the standards…

I learned about the game about 16 or 17 years ago. TheMisterT made the boards and I made the bags for us about 7.5 years ago. And then a couple years ago I had to remake the bags, because the squirrels who are squatting in our shop figured out how to flip the latches on our storage bin! 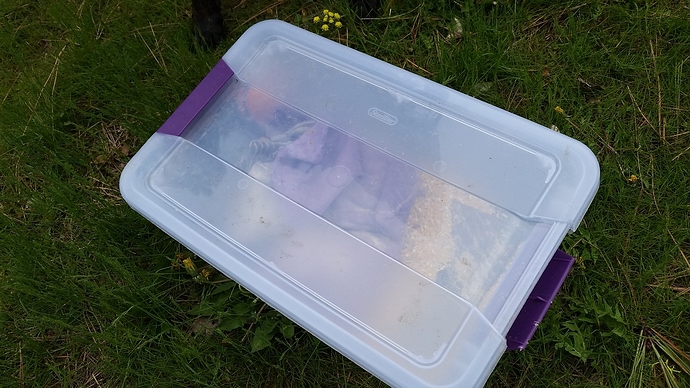 I really didn’t know it was a big enough thing for associations to form around it.

Not just an association, but a “Governing Body” of all things! I imagine that colleges and universities have teams, as well as community groups like Ultimate Frisbee.

How much do you think it weighs? Have you tried Parcel Monkey?

I put it on a kitchen scale last night and it came in somewhere around 12 pounds! That was before the handle and I have another little gift to send so it’s probably going to be at least 15 pounds! I was planning to shop around on the shipping, but I hadn’t heard of Parcel Monkey, so I will look into that one, too!

I thought you used a repurposed drawer, but I can see how your special vendor gift box (because you must be special for vendors to be sending you gifts

) came in far more handy! And what a great way to put that box to use. I like how you stained it and great job with the sand paper, you can’t even tell there used to be a logo!
My dad made a game set for when we’d go camping, but we’ve always used washers rather than corn filled bean bags.

We have a set of washers for the beach and such, too! We use PVC coupler as the “goal”, buried in the sand. Years ago I made TheMisterT a screen bag and custom painted washers for his set.

What an awesome and thoughtful gift. I’m sure your friend will love it.

SO much fun. This is great!