And a little video, I have finished the first modificated truck. About the only thing really different is invisable, heh. I made a larger hole under the fifth wheel, and partially made the underside of the fifth wheel thinner to allow the peg on the trailer to move front to back and side to side. (which is why it is burnt a bit,

). What that means is the trailer will bend with some inclines.

Here shows it going up. 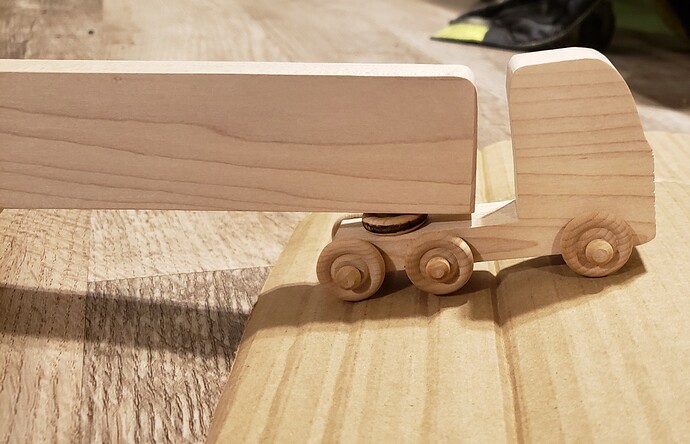 And here we can see it going over the top of an incline. 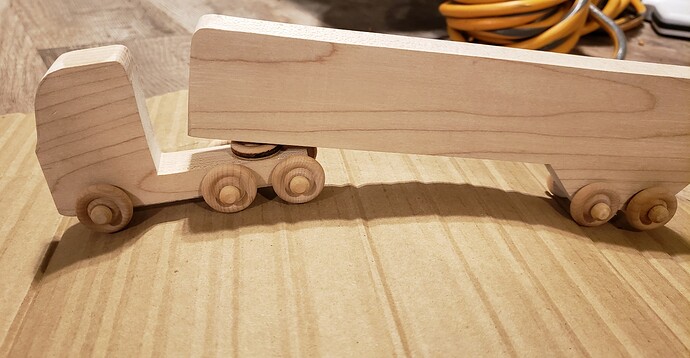 Not seen is the fight I had getting off the floor,

Anyway, it holds up pretty darn good. So I believe this will work as long as I can keep from burning the wheels while notching them out.

I love these wooden toys you are making. So awesome!

That is very clever! I love your wooden toys, @CatwithSevenToes!

Also I know of an exercise program where all you do is get up and down off the floor!

I think you are supposed to lay down flat on the floor and then try to get up a different way each time. You gradually increase either the time spent doing it, or the count of number of times you do it per session.

I tried it years ago… But I have terrible issues with my joints (hypermobile-type Ehlers Danlos Syndrome), so it was not the best exercise program for me!

Wonderful modifications! While they may not be glamorous, they will make playing even more fun!

I really enjoy your wooden toys!

My sons would have loved these when they were little.

Well, this one kind of blew up in my face.

Mistake 1: put too much glue for the stack, so there’s a little smudge on the sides of it, and I just make it worse trying to sand it down. Too small of a crevice.

Mistake 2: Like a dumb dumb, I used an allen wrench to clamp the stack down and it rightfully chewed into the stack.

Mistake 3: I didn’t remove enough of the glue for the wheels, and used cardstock instead of the thin cardboard paper. So two wheels don’t turn easily.

I won’t call this a mistake, as this truck is longer than the other, but it still articulates a bit. Just on a decline the front wheels will pop off the road. 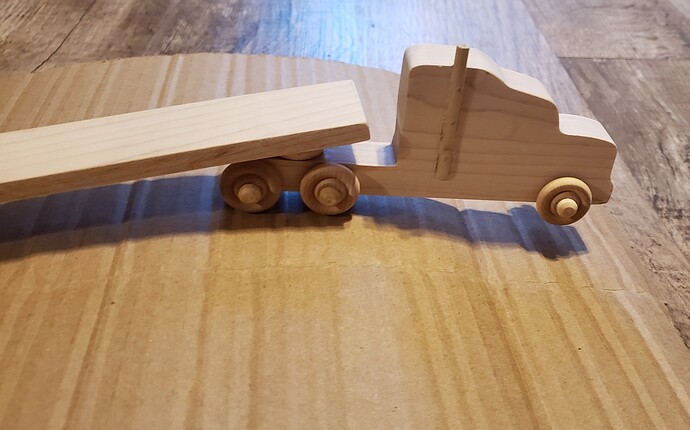 Meh, all in all, I do like how it came out. I’ll just have to be more careful on the next ones (and don’t push myself too much).

These are wonderful! I don’t see any of these mistakes you speak of for truck #2.

And the third one is done.

So far I only found the snub nose truck (here) and two of the flad bed wheel wells (that I didn’t use) to be crooked. So pshew, I got lucky as the drill press wasn’t straight after all. I fixed that,

Now, I should still have five more trucks to make. So, what’s another modification I can make? That I have on hand. (Grrr! I just thought of doing a tanker, but I’d have to buy a rounded fence railing for it, and a dowel. Not buying more stuff right now, yeesh!

Congratulations! Your awesome truck is a Featured Project!

I hope that simpler toys like trucks and blocks come back into fashion! They really do make a child use their imagination much more than a lot of the character toys that limit them to the movie scripts!

I love how you have made making your trucks a learning process for yourself as well! I am sure any child would love to play and make those awesome truck noises! honk honk!