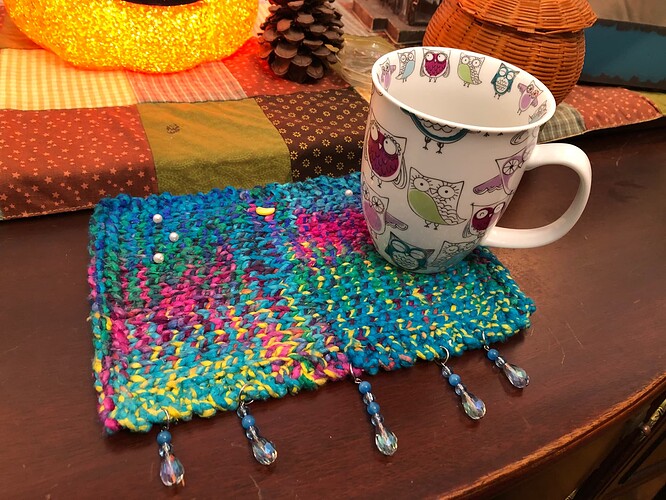 I originally wanted to make a mixed media wall hanging with this yarn knitted up as the base layer. As I was working it up it started pooling in a way that made me think of trees changing colors around a lake. A specific lake which is part of the fabric of my character, but that’s getting too deep to go into here.

The way the color moves looks to me like a reflection of trees of various colors- some pine/evergreens in the green spiky areas, maples in the wild pinky-purple. The yellow made me think of how light reflects off the water so I added a yellow moon to cast the light and added pearl beads to suggest either clouds or stars depending on your mood. The dangling beads are water drops- dew perhaps, maybe a waterfall. (When held up as if on a wall the drops hang more evenly spaced.) I may come back to it after it sits for a bit and add more to it, and maybe it will evolve into a wall hanging of sorts, but for now it wants me to let it be done and so I am honoring that. 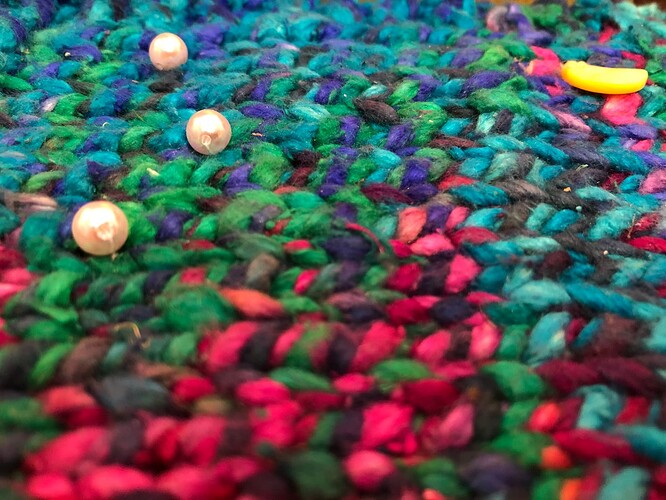 I cast on 20 stitches in Darn Good Yarn’s worsted silk (colorway: Macchu Picchu, on Size 9 straight needles) and did a border of garter to avoid curling. Then worked it up until it felt right. When I stopped and added the top border it wasn’t feeling like a wall hanging anymore but a mug rug so I went with that. Then I got out the stash of bits and bobs and played around with things until I got here. I may still add an embroidered something or other but for now, it is done.

Oh I love this!! It is reminiscent of changing colors around a lake. The added textural elements are wonderful!

This is absolutely lovely my friend. Bright and unexpected; warm and textural, cool and sparkling. I love it!

Thank you, friends! I was afraid my vision wouldnt translate and it would be like, “Really, lady? That’s a stretch.” But if you see it too then I feel good about it being an appropriate contest entry. Thanks!

Wow! This is a wonderful reflection of you and your lake! (pun intended) Seriously, I’m so glad it’s a part of the Challenge!

The colors are very pretty.

Not sure which I love more, your mug rug or your mug! So fun!

I see your vision! Love the additions you made to the mug rug as well. Good use of that sturdy and colorful yarn as well.

A perfect way to enjoy a beverage in this changing season!

Ooh, this is gorgeous! Every bit of it, the project & your thoughts & feelings about it too.

I really like all the colors in this! What a fun mug rug, I’d feel inspired every time I set my coffee down!

This is beautiful! I love your description, too. I think you hit the mail on the head! To me it actually looks a little like Van Gogh, if he was a fiber artist.

Thank you so much!

I love how you took advantage of the gorgeous way those colors are pooling to make a piece of art!

Yeehaw! Your amazing craft is a Featured Project this week!

I’m late to the comment party because I wanted to finish my entry before looking at others.

I totally see your description!