This little sweater was started in January for a baby cousin coming in February, but I put it on hiatus for too long and she is too big to wear it. So, a coworker’s wife had a girl 2 weeks ago and I finished it. I don’t have his reaction as he was off yesterday and I’m off today. 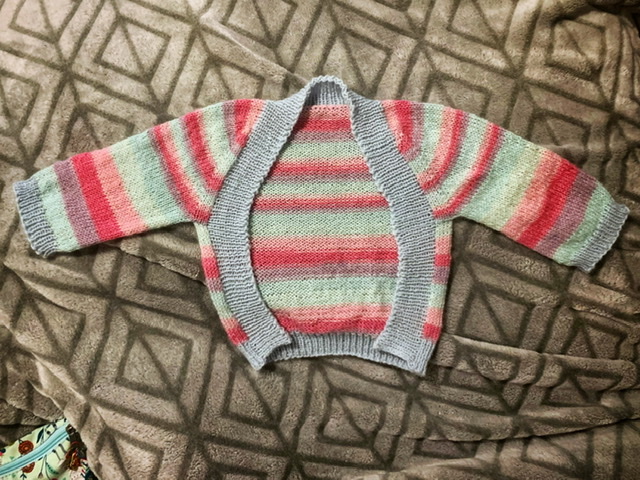 I used Knit Picks Felici in Tea Party and some of their Stroll Glimmer in Frost for the ribbing. I roughly used a ball of felici, I had to go into my 2nd ball in order to match up the stripes on the second sleeve. I really wished I had a purple that matched for the ribbing or used the glimmer I had in peacock (I think that blue I used is a little off, but the sparkle makes up for it).

It’s really pretty! I’m sure your coworker will love it.

It’s so cute! I’m glad it was able to find a new home and I’m sure it is loved!

The colors are wonderful!

I hope so too. I couldn’t gauge a reaction, so we’ll see what his wife thinks.

Thank you. This was one of the felici colorways I didn’t really want to part with.

Oh, that is just darling!

It turned out so cute! The colors are soft but not typical “baby” so that makes it fun.

Thank you. It’s definitely girly without the pink overload.