I came across a thrift store grab bag of good-sized pieces of fulled and hand-dyed wool for $3. What does one do when one acquires such a thing? One makes a bat. 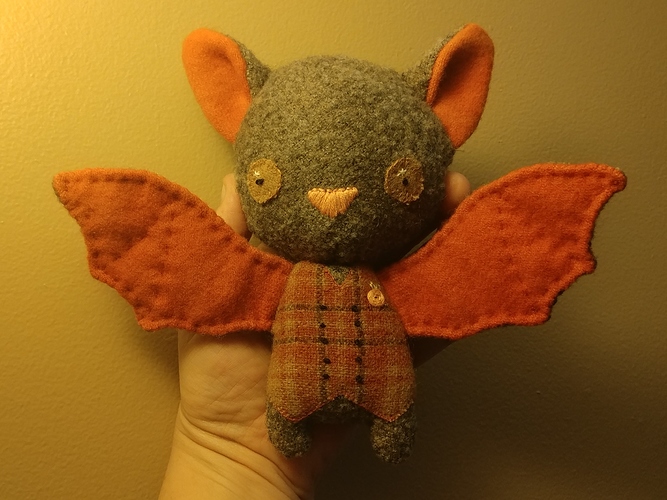 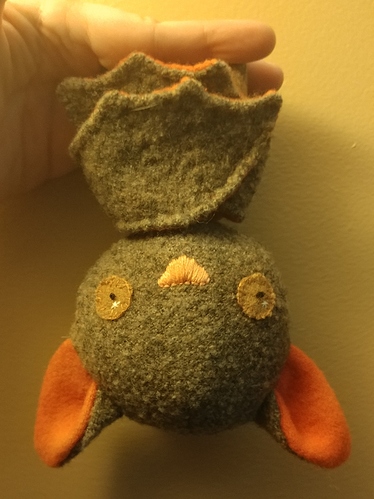 Except I traced it off my phone screen at somewhere between 50% and 75% full size, because I don’t have a printer at home. He’s all hand-stitched, in part so I could sit in front of the TV, and in part because I could better control the smaller-than-standard seam allowance, since I reduced the pattern without adjusting it. I also cut the head pieces on the bias to help round out the darts. The original pattern recommends that stretchy fabric be used, because wovens won’t tend to properly round out, but a 100% wool fabric cut on the bias was sufficiently stretchy to accomplish it when properly stuffed. Next I plan on making a Tattooed Lady bat out of dark plum plaid with crimson accents and a good deal of embroidery.

I love this little bat so much! So very dapper!

He’s so cute! Love the embroidery!

Thanks! Lol I have watched so many embroidery tutorial videos but never actually do it. I don’t actually remember the last time I did any embroidery outside of cross stitch and even that was several years ago, and I never finished the project. (In my defense, I started just a week or so before my dog passed away, and the first bit of stitching had her hairs all tangled up with the floss and I couldn’t bring myself to complete it without that slightly dusky cast to it. Silly to set aside a project because it WON’T have pet hair in it.) I decided to take a very small leap on this guy and have grand ambitions for his lady friend.

Heck yeah, you make a bat! What a great find at the thrift store and what a fantastic result! Batrand is so adorable in his little waiscoat!

Batrand is dapper indeed! I love his expression!

The vest!!! So stinking cute.

OMG! His face and his tiny vest are just adorable! It’s amazing how expressive your bat is just from the eyes alone. I can’t wait to see the next one.

Ha! I posted then scrolled up and realized we said the same thing. We’re on the same wavelength this morning

He’s adorable! What a great find! And excellent workmanship!

He is absolutely adorable! I am going to check out those patterns. Love him!

Congrats! Batrand is one of this week’s featured projects. Way to go, Batrand!

What a dapper night-sky dancer!

Squee!!! Hims little suit!! And I love his nubby fabric! The colors are perfect! Thank you for sharing!

thanks so much, everyone!

But I have a confession: His name is now actually Vlad. Because the day I was finishing him up was also the day my teenager got home from house/dogsitting for my parents (so hadn’t seen me working on him), and while I was sewing Batrand’s head on, my kid saw him, screamed, and aggressively laid claim to him. Mere moments after I had him finished, named, and photographed, a batjacking occurred and now he lives in the basement and goes by Vlad. I’m busy stretching my embroidery chops on his lady friend now, though.

He is soooo cuuuuuuute! I like his plaid suit and his fuzzy head.