For the last Little Visitor swap, @LadybugsAndBees sent me a bunch of sea shells and some sea glass(!) from several beaches near her. I put them in a jar, but kept thinking I needed to do something with them. I started thinking about assemblage art, and gluing them to canvas then painting them. But, once I painted my canvas and started gluing (I did design my layout first), I just knew I could not paint over these shells. (Maybe some picked up from a craft store, but not ones that my LV Mr. Sparkles helped LBAB choose for me!) I still think that would be cool. I’ve thought about doing it with a design painted over the shells.

Anyway, now I have a fun canvas to showcase my shells.

And, since I’ve been collecting a bunch of shells on Animal Crossing…how many bells is this worth? 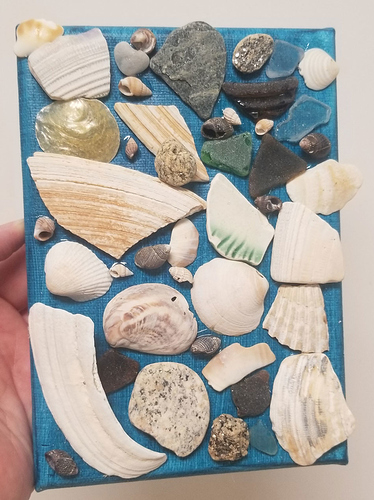 I wouldn’t paint over them either! It would cover up all the odd things found on our shores…many worn down and broken over time and the ocean and sand…I have a huge clear container of them from my walks on the beach and I have used some for other projects.

I am so glad you like them so much, Lynx2Lancer!

For anyone interested in what type of shells they are, I can identify some of them:

-Yellow iridescent shell: I don’t know the real name, but the “common” name is ‘mermaids’ coin’
-Triangle shaped shell with lines: clam shell
-Same for the big triangel shaped shell underneath that on the next row
-The piece that is white on top with green on the bottom: That is actually a piece of sea pottery! I’ve lived on Long Island my entire life and have never, ever seen a piece of sea pottery wash up on any of the beaches here!
-Next to the sea pottery piece and the shell on the next row: clam shell
-Shell with a small hole in it: I don’t know the real name for it, but the common name is ‘slipper shell’ (google it, it’s cool)
-Next to slipper shell: clam shell
-Next to clam shell: scallop shell
-The big long shell in the corner: clam shell

There is sea glass and different rocks in there, along with the really nifty small, perfectly shaped shells. I wish I could remember their name. Snails go in them. They are so much fun to find and there are so many different colors of them!