Last night, I made blackberry crisp for my dad. My eight year old niece asked to help me, so the two of us set out to make this. What should have been 10 minutes prep time turned into 40 minutes, but it was a fun 40 minutes. Some of that time was spent explaining cup measurements, which she totally understood! Now does she remember…? Probably not. Oh well.

I regret not getting a shot of the mess we (mostly she) made. There was a bit of flour all over… and the recipe called for less than a cup total. I have no idea where all of the extra flour came from 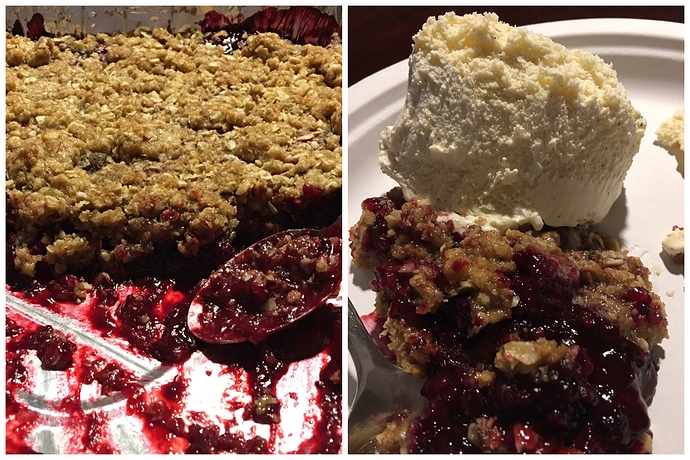 Overall it was yummy. We used frozen instead of fresh blackberries. I doubled the amount of sugar to put on them and they were still too tart. But with a bite of vanilla ice cream, it was perfect! Well, perfect except for the few berries throughout that caused people to pucker when they ate one. I know what I’m having for dessert tonight

Yum, yum with a side of yum! It looks delicious!

Oooo! Yummy! Blackberries are one of my favorites!

Cooking with kids can be challenging, but so much fun. And it’s the sort of stuff that they remember and cherish