When my mom died, I found a box covered in puppy dog Christmas paper in her dresser. Inside, she had kept a bunch of memorabilia from her days as a bowling champion. I decided I wanted to do something with some of the stuff, instead of just leaving it in the box.

My original idea was to make a tote bag so I cut out one out of heavy twill-like fabric but then never had the energy to sew it up. A few days ago, I came across a canvas tote bag that @kittykill had sent as part of a prize package from the stitchalong last year! It was perfect!

I ended up blanket stitching 38 patches on it. Took me three days and lots of stab wounds and bleeding as well as sore fingers stitching through the canvas at odd angles, but it was worth it to me.

She began bowling in 1965 when my dad was stationed in Turkey…we had no TV and lived in the city with no car, so we all had to find other ways to keep busy. My mom learned to bowl.

Interesting fact…women were not allowed to wear pants on the street, so my mom walked to the bowling alley in her skirt and blouse and had to change to pants at the bowling alley…some women bowled in their skirts with shorts or tights underneath! 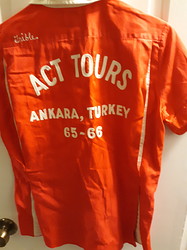 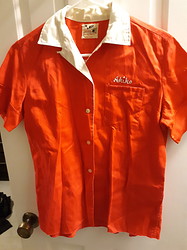 The bag, one side then the other: 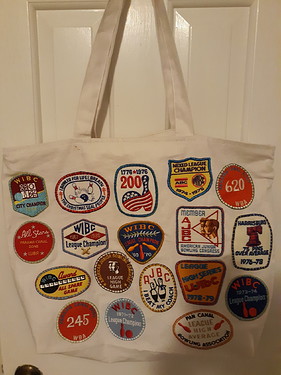 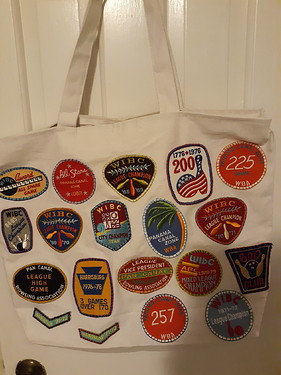 Close up of her favorite patch…I also had the newspaper articles of her because it was a big deal for a woman to bowl three games of 200 each! 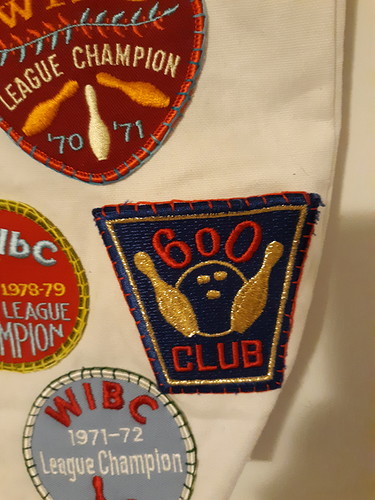 My mom bowled in every place we were, but she peaked when we lived in Panama from 1968-1972. We got to travel all over South and Central America with her to bowl…Venezuela, Honduras, Nicaragua, etc. 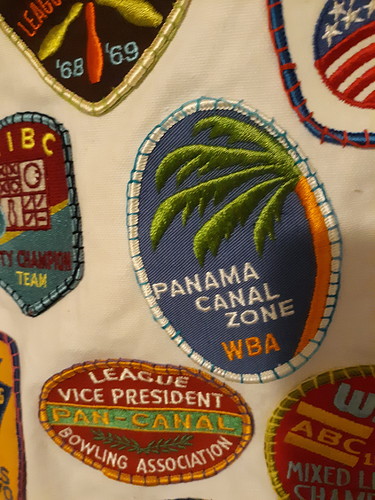 Of course, this influenced my life as well…I started bowling when I was about 15 in a junior league and then bowled in college on the Purdue University team! I only had a couple of patches from my junior league. 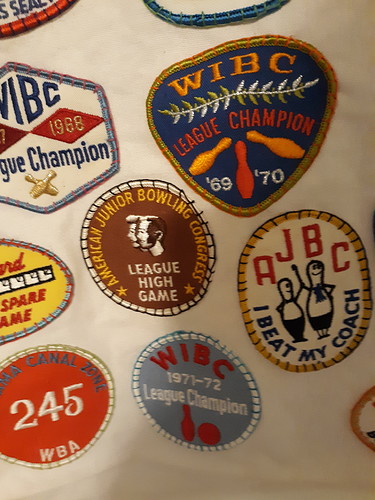 Thanks for looking and letting me share a project that meant a lot to me.

Oh my gosh, this is so fantastic! Brings tears to my eyes to see all that glorious history so beautifully displayed. You must have been overcome with memories the whole time you stitched, & again every time you see the bag. Wow, what an amazing project. I just love it!

This is such a remarkable story! It’s interesting the things we take for granted now (women wearing pants…) I can barely get a 200 on Wii bowling (I should play again, fun!) but at an alley, no way! It is so cool how she was able to travel all over and take you with her. The memories! I think sewing those patches where you can enjoy them was a perfect labor of love and opens up the chance to tell tge story so many more times!

It was tough at times…I would get choked up, remembering my mom and all the adventures we had. I even caught my mom smoking once and it was a secret we kept from my dad! lol

This is such a beautiful way to display your mom’s achievements. Thank you for sharing the story behind it!

This is so sweet and amazing! What a beautiful tribute to your mother and bowling.

I truly love this. It says a lot about how much you love your mom! So sweet. And what a history! Your mom sounds like an amazing woman!

That’s so awesome! I love that you’ll now get to see the patches and show them off too. No more hiding in a drawer! Awesome story, and an awesome project my friend.

I just love this project so, so much, @AIMR! First, I just love the aesthetic of embroidered patches, especially when they commemorate an accomplishment or event. Second, seeing them all together as a memory keeper is really touching. Third, knowing they are brought out of the box for display on something you can actually take along with you in your daily life is really just the best. I also loved hearing your recollections of you mom’s bowling career!

I think we have an “I beat my coach” or something similar that TheMisterT earned as a kiddo in Wyoming around here somewhere.

My mom was small,weighing in at about 113 pounds…but she bowled with a 16 pound ball…the heaviest allowed! I didn’t realize it until I was older, but a small Asian woman in a male dominated field was something else, particularly considering that until 1950, the WIBC and other leagues actually had a clause in membership that forbade anyone joining unless they were “of caucasian race”.

Ooh, your mama was a revolutionary!
Actually, that explains so much about you…

This is a lovely project and I love your story.

Really great story and great use of sweet memorabilia.

YES! This collection tells a much bigger story than just a person’s hobby that hit the big time.

This is so neat! And such a neat story! The fact she had all those patches and things put nicely away in her dresser means you could tell it meant something to hear and now you’ve made it usable and viable! The perfect way to honor her memory and love for bowling.

Love every single thing about this bag, the patches, and your mom’s story!
16 pound ball?!?!??! Woweee.

lol yes…considering I was at least 50 pounds more than her and I could barely manage a 12 pound ball! Plus, she had fingernails that were so long…and never broke a one! Those were the days of glamour bowling…I will have to see if I can find some pictures of her with her big hair, lipstick and fancy bowling outfits! lol

What an amazing story this tells! Your mom sounds awesome (that must be where you get it from!)

Fantastic keepsake! I loved reading about your mom and her bowling.