Butterfly on a wire chorts

… yup, I’ve no idea where Mr Loops’ mind was with that one…

Anyways, hey you crafty bunch, I hath returned after my rather extended interlude (due to my ill-health and our continued heartbreak at losing our pupper Rosie). I’m pleased to say that I’m back to sewing again, and my latest make is this lovely (if I do say so myself) pair of butterfly chambray shorts! 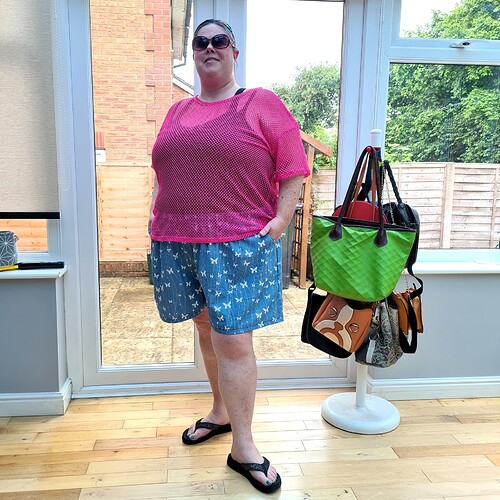 Admittedly it may have been a poor choice wearing such a bright attention seeking top with them (and/or not tucking it in), but I wanted to match the colour I used on the feature pockets 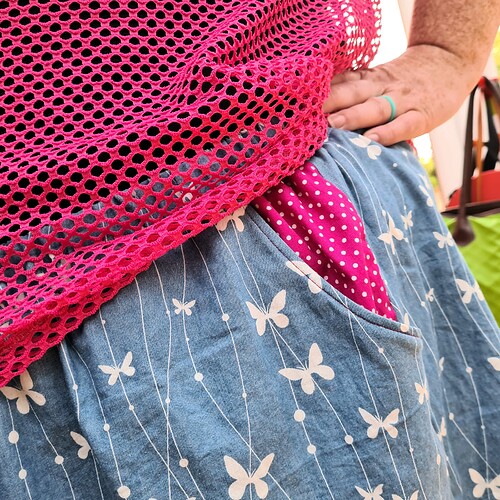 I did ponder also putting a matching band on the bottom, but in the end decided I didn’t want to take away from the pretty butterfly chambray so instead I hemmed them with a decorative stitch in a matching colour. I’ve not actually done this before, but I love how subtle it is. 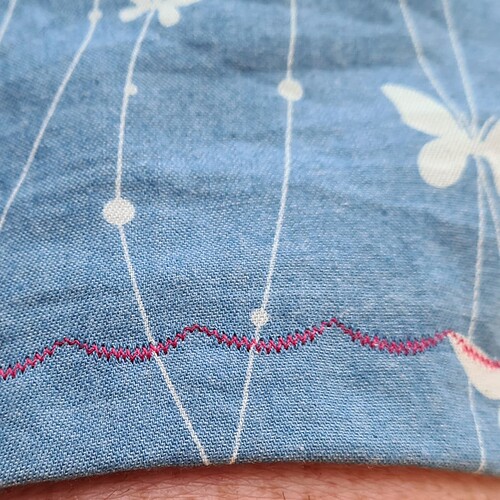 I keep thinking that I want to make something different with chambray, because I really love it as a summer fabric, buuuuut I wear shorts 95% of summer and I only tend to wear stretch fabrics on my top half cos of the ole bazookas etc, so it makes sense to just make tons of chambray shorts!

As I sit here, I see 2 other chambray fabrics waiting to be made into shorts… a nice one with black flowers on, and one you’d probably call a bit more me… one with dinosaurs all over, rofl. I probably have more chambray in my fabric drawers too… 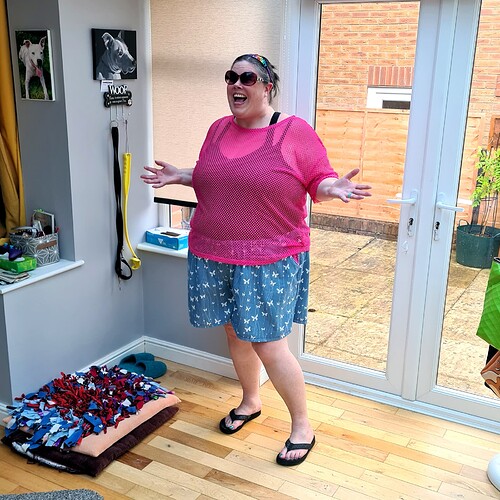 And before I leave you for today, I’m pleased to tell you that in just over an hour we’ll be heading off (and I’ll be wearing my butterfly shorts of course) to the Bath Cats and Dogs Home, to pick up our new rescue pupper, Angel Rosie’s little ‘sister’, Arwen. Formally to be known as Lady Arwen of Lydney, lol.

(It should be noted that I’ve never seen Lord of the Rings, but Mr Loops has reliably informed me that there was a half-elf in it called Arwen so that’s presumably who she was named after!) 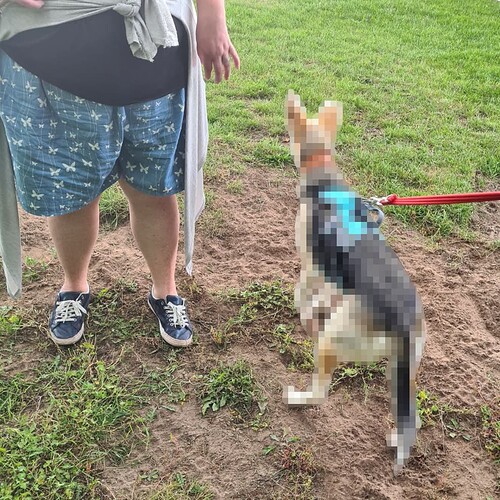 Pixellated (just to be a meanie) until we’ve picked her up and I reveal her in “Let’s see your pets” in the lounge, and on future clothing posts!!

Well done for making it to the end!!

Yay for these awesome shorts. Love the pop of pink and they look sooo comfy!

And YAY! For Arwen! Can’t wait to meet her!

Those shorts look amazing and comfortable. I think that hem detail is phenomenal. Add just the right tough without overwhelming the cute print of the butterflies.
Did I hear dinosaurs? Um, yes please! I need to see them. I have a dino obsession!
And Arwen is a lucky pooch. Can’t wait to properly be introduced.

Great new shorts! Chambray is perfect for shorts… the versatility of denim without the heaviness. Love the little hem detail, too.

So glad to see you…I am sorry about your losing Rosie…your new furry one is so lucky to have you…hopefully, she will also join you in your sewing adventures!

I love the shorts and the pops of color. Sewing allows so much opportunity to add these special and unique touches!

cute shorts! the butterflies are awesome. glad you are feeling better, too!

So sorry to hear about Rosie - the furry friends are hard to say good bye too. She’ll look after the rescues in spirit, though you seem to be a pretty awesome doggo mom as well

The butterfly fabric is so nice, & your accent choices look great!

Congrats! Your project has been Featured this week!

The shorts are awesome! Great to see you back, I’ve missed your fun posts. So sorry about Rosie.

Fun shorts! I love the peekaboo pink pockets! They look great on you! And yay for Arwen!

@Abbeeroad They are sooo comfy, I do love shorts, I tend towards Bermuda length shorts these days but they just means more comfort, lol.

@gozer Ooh excellent, dinosaurs are coooool!! I’m a little behind on posting atm (having to give Arwen 100% attention at the mo until she settles in and stops trying to eat things she shouldn’t, lol) so I’ve got a couple more things to post first, but dino shorts are coming soon!!

@TheMistressT I need to get on that already, she’s been with us 5 days already now!! And we already have 230 photos and 15 videos, rofl.

@AIMR I hope so, I’m hoping one day she’ll be able to do some dog collar modelling for me, and that she’ll try direct my clothes photo shoots

Absolutely, I find it hard to be enthusiastic about most clothes in stores these days, I’m not even sure of the last time I bought any clothes for myself tbh!!

@Animegirlie Absolutely, tbh I’ve never grieved as much for humans as I have for Rosie, they give so much and love without question, and ask for so little in return. Arwen will hear all the stories of her big sister Rosie!

It’s been a tough few months but I’ll be back with more regular posts soon hopefully, once Arwen has settled in!