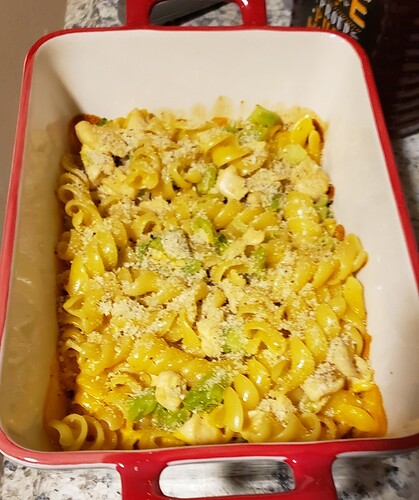 Wife bought me a larger air fryer/baker/convection oven thing, so I’ve been cooking a lot more smaller meals for the both of us. As well I’ve been keeping myself stocked up on fried chicken pieces that I cube, fry, then freeze.

tonights meal is half a package of Rao’s Fusilli noodles, cooked til just tender. Then in a pan with one tablespoon butter, I heat up the frozen broccoli and chicken with about one third cup or a fourth cup of chicken broth, salt and pepper. Then I add in one cube of velveeta fresh packs stirring til it was all melted. blend in the noodles, then pour into a baking dish. cover and pop in the oven to bake for 23 minutes.

while it’s baking I get the topping made. In my mortar, I put three butter crackers, a pinch of each thyme, salt, dill weed, and celery seed. Then I sprinkle the mixture over the dish after I take it out of the oven.

it was pretty good, but would have been better with a cheddar sauce (that no place around here sells the velveeta cheddar blocks any more, and I didn’t want to make it from scratch, heh).

I made this strictly for my wife, so not a lot of other things were added to it, but personally I would have added half a clove of garlic, two teaspoons green onion, and two teaspoons parsley.

seriously? I put cheddar in the title? Well that’s what I get for posting this from my phone. That, and I was really wanting cheddar,

Nice! Smaller meals for two can be tricky but looks like you nailed it.

We precook chicken and freeze it in chunks as well. It is hard to cook for two people without having loads of leftovers.

I am not a big fan of casserole type dishes, but this one has veggies and protein and cheese! Looks yummy!

Looks good! My husband got an air fryer for his birthday back in July. We haven’t used our normal oven since. We were looking for a casserole dish that would fit in our air fryer. Which one do you use?

Which one do you use?

I use one I got from my wife’s work (because it wasn’t selling, or one of them was damaged. Can’t remember why). It has the name Mr. Food on the bottom, but I can’t find anything like it, but regardless I don’t really like it as it is almost too big. I want to get my hands on something smaller, but I really want it to have handles as it’s not easy getting things out of the air fryer/baker oven. So I’m in the market for a few myself.