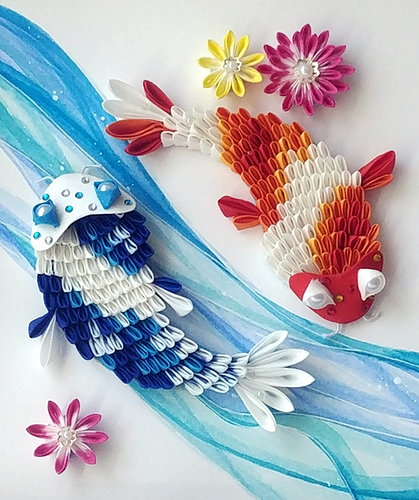 Sometimes it’s fun to do something other than hair accessories. :3 I made this tsumami-ga (tsumami craft art) at the request of a roleplay streamer that I follow on Twitch called Choi. So, the piece is called…choi fish

I’m not much of a painter, but I did paint the background stream on bristol board using a combination of Winsor Newton Cotman and a pearlescent blue paint from a local paint company called Stoneground. It’s hard to see in the photo but it has a nice sheen in person. 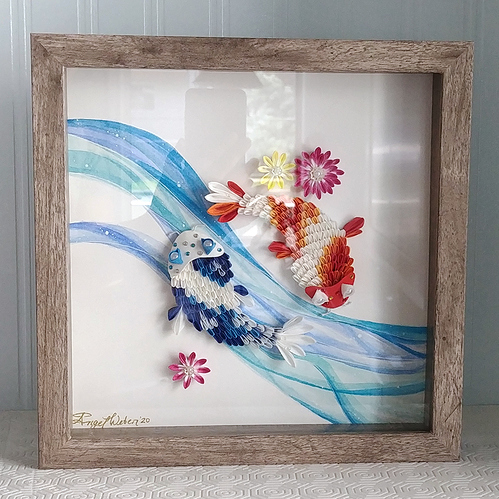 It lives in a shadow box with a kind of worn grey-ish color, which reminds me a little bit of driftwood. I thought it was a good match for this watery motif.

This is really lovely. So… what are the fish made out of?

You do such delicate work! Lovely piece!

They are made of folded squares of silk.

So wonderful! I love the texture of the scales.

Congrats! Your Choi Fish Tsumani-ga is one of this week’s featured projects. You are awesome!

Knew these had to be yours from the thumbnail! These are probably my favorite thing you’ve ever made yet. Let me know if you’d ever like to do a swap for a similar shadowbox (maybe for an elaborate hoop?). I seriously LOVE them!

I agree with @roler, this is probably my favorite thing too! You have been creating some epic pieces lately. This is incredible.

These are stunning, and the shadow box you’ve crafted for them is perfect. For a non-painter, the sweep of water is exquisite. Everything about this works together beautifully.

Oh my gosh these are both beautiful and adorable!