I made the body of this pouch using a piece of cardboard as the loom, following this tutorial from Spinoff Magazine.. A bulkier yarn is best for this technique because there’s only so small one can go using cardboard. And it did take me a few re-tries to figure out what I was doing. 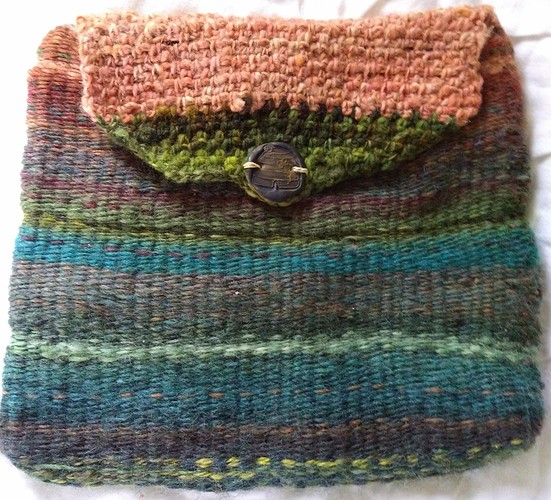 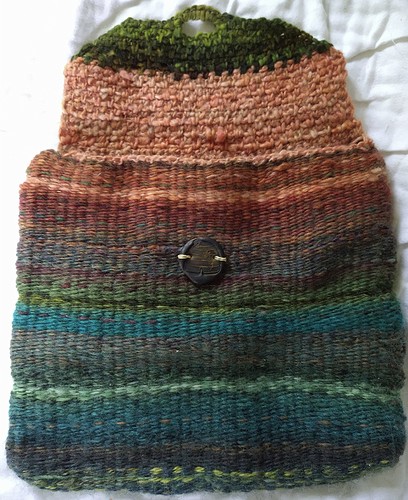 IMG_20210509_123741852~21475×1804 820 KB
I had one skein to use of Lion Brand Amazing in Acadia colorway, from a fortunate day at a thrift store. I added in scraps of my handspun yarn that fit the color scheme, and after it was removed from the makeshift loom I crocheted a cover flap with the remaining handspun using moss stitch.

The beehive button was made by someone in Shop the Swap but I don’t recall who…maybe @MissingWillow? Utah highway signs feature a beehive, so it seemed appropriate (among what buttons are in my stash - I don’t have any that resemble sandstone and rock art) for a piece that reminds me of the wonders of that region.

If you’ve been there you know the color scheme is rather reversed (almost all orange and rust, with pops of vegetation, much of which isn’t this lush in color), but what is alive there stands out so prominently against the dry backdrop.

Fantastic way to use handspun yarns! Love that you used a combo of commercial yarn and the handspun…also, knitting and weaving!

The colors are beautiful…

Such beautiful colors, love it!

Love the colors, they’re like the last bit of a desert sunset.

The yarns are beautiful and this project really shows them off!

I love the weaving and the combination of mediums. Really beautiful!

Homygosh! This is so gorgeous! Did anybody else immediately rummage yarn stash & recycle bin for cardboard?

Goodness that’s so delicate and lovely

The texture on this is just magical!

So pretty! I agree with @Kwality570-the texture is magical!

Wow. This looks like so much work and it turned out so rich and beautiful. How big is it?

Thanks, all! It’s about the right size for a tablet; slightly too small for a pad of letter-sized paper. I’m using it to hold the new cupping kit I just scored at my last thrift store run!

Still love this. I have some beautiful new handspun to play with too…

I love weaving projects so much. I often get distracted by all the beautiful weaving art that uses fantastic textures of yarn but this project reminds me of the beautiful simplicity of a well-woven textile in inspiring color combinations. So gorgeous, totally makes me want to do some weaving of my own.