Made this Temari ball for a personal swap with @Raury. It is the largest one I’ve ever made. 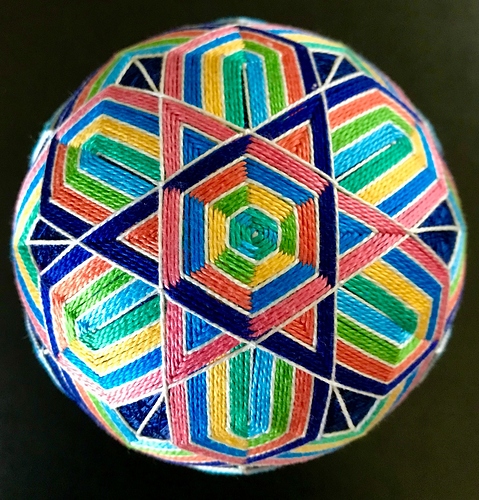 I ended up using more colors than I intended to… had to, because I realized I’m running out of some colors of thread. Barely squeaked by with some of the colors! 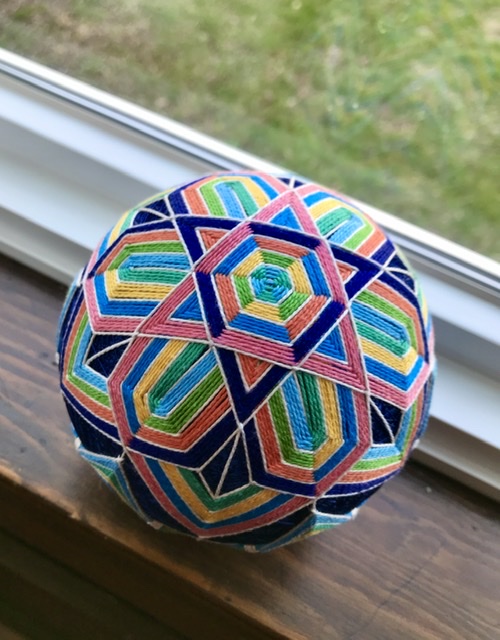 The design is based on a picture I’d seen on the internet. 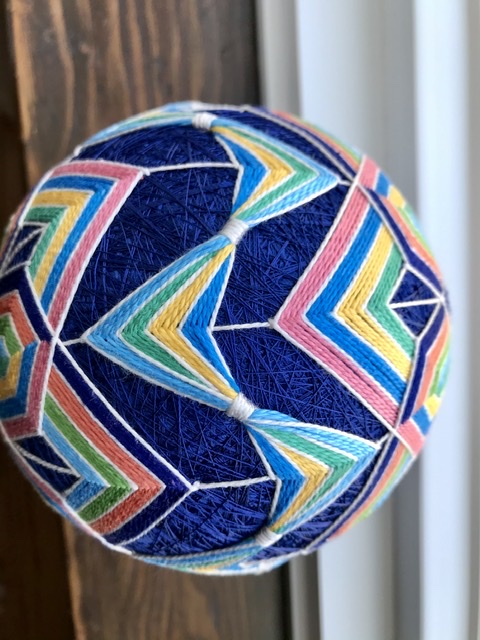 The shipping (U.S. to Canada) took a very long time. I’m relieved that she received it!

Probably won’t be making another temari ball for a while, unless I decide to try one with “regular” embroidery thread, which I still have in stash. Up to now, I’ve been using the thread that is sold in the twisty hanks, which is what my teacher had suggested when I took the class.

These Temari balls are so gorgeous!

Every time I turn around, someone is posting something new on here that makes me want to learn a new craft or technique…

Your talent for this is astounding…it’s lovely!

This is so beautiful.

Ooooh, this is fabulous! I really appreciate the details, that twisted over bit wrapped in white thread… Just wow.

Beautiful!!! I love the colors and design

It’s so pretty! How long did that take you?

Thanks, all! I made it in about 5-6 days. But I’m still new at it (and also very distractible), so a more experienced Temari maker could have done it faster, I’m sure. Plus I was not working on it all day each day.

This is quite beautiful! It looks like stained glass. Very lovely.

It’s a color explosion! I love it! The detail on the sides is super cool too!

SO gorgeous! I love the colors.

Congrats! Your Colorful Temari is one of this week’s featured projects! You are awesome!

Dang! So pretty and kind of mesmerizing.

The pictures do not do it justice, it is even more beautiful in person and I am happy to say it gets to live in my house. It is also quite large, it would fill your hand and then some. I absolutely love it and congratulations on getting picked for picture of the week, you definitely earned it!

It’s fabulous! The color combos and placements are even more impressive knowing that you had to finagle them. It looks very cohesive.