Coverlet of the Seven Fandoms (Cot7F)

This is one of my most favorite things I’ve ever made and it was a beast. I posted it on the old site back when I made it, but only in my craftalong as I was too nervous then to jump into the deep waters of the “completed projects” spaces. With others posting some older favorites I thought I would give her her due by adding her here.
The Story:
In the fall of 2013 a good friend (who appreciated my yarny things) was getting married and having a “geeky wedding.” Her favors were little nods to different fandoms of the Bride and Groom. She asked me to make tiny knit hats from one particular (cancelled-after-one-season-how-could-they?) show and that gave me the idea for her wedding gift. Under the guise of general wedding jibber jabber I stealthily asked what their top fandoms were. I then scoured the interwebz for free patterns involving the named shows. May I present to you- in a mix of crochet and knit- The Coverlet of The Seven Fandoms: 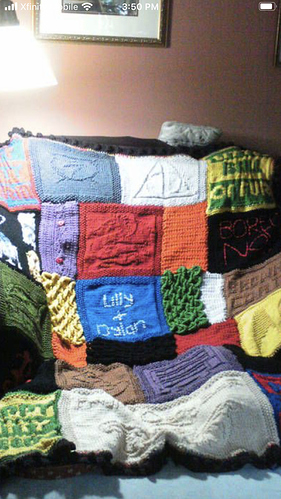 The blocks:
Big Bang Theory: The 4 corners are the lyrics to Sheldon’s lullaby, “Soft Kitty.”

Game of Thrones: The center square is bordered by a dragon block and 3 “dragon scale” blocks in the colors of Daenerys’ dragons.

I patchworked the blocks together and then filled in any open spaces with plain patches and one (the purple with the buttons) is a block to hold the purse-sized packs of tissues for when their shows are too emotional or cancelled. (Or both!) I bordered them first in a variegated yarn with most of the blocks colors represented and then in a rich chocolate brown using a popcorn stitch to bring old-timey marquis lights to mind while not being too visually loud. Finally, I backed the whole thing in a chocolate colored fleece that I hand sewed on (some while we were driving to the wedding!) as I don’t know how to use a machine.

It’s still in a place of honor in their living room and holding up well, I’m told.

*(I have to go dig out my old camera to get a better pic/any closer pics of blocks, but this gives you an idea of her size and look.)

And I LOVE that you put a tissue holder block in there! Appropriate! HA!

This is absolutely amazing! Your friends are so lucky!!

This is so cool! I am so glad you are sharing this with us!!

Wow, what a labor of love! It’s amazing and I love that there’s a tissue holder.

" under the guise of general wedding jibber jabber"

You are indeed a special friend…and a sneaky one…oh, and a talented one…and…how personal, unique and enduring…truly a special present to this couple

Wow, that’s fantastic. It looks great and I love how it combines the things they love.

Yeah, put that uncertainty away… Because this deserves to be seen and ogled by all, not just tucked away in a craftalong thread! Amazing work, and what a friend to make this awesomeness happen.

This is so amazing and clearly a labor of love!! Please do not hide things like this away; we want to seeeeeeeee!

Wow, what a personalized gift. I would have needed those tissues right out of the gift wrap, WAH

What an awesome gift

it’s great when you can combine a lot of things that people likes.

May I present to you- in a mix of crochet and knit- The Coverlet of The Seven Fandoms:

@AntBee I love this to an exponential level. I keep a running list of items to make for the many fandoms. The list keeps growing. I don’t really even know why I continue at this point. Some were short lived, but no less important.

She asked me to make tiny knit hats from one particular (cancelled-after-one-season-how-could-they?)