Creating a resort oasis in the back yard

Over in the Bird and Bees June challenge I have plenty of after pics. But, I am really proud of this and where its come.

We bought this home 4 years ago this past June. It was a foreclosure that had pretty solid bones, water damage and a broken bathroom, no appliances, hadn’t been cared for in a decade and a forest out back. When looking at the house the only thing we couldn’t get access to and see was the large inground pool. It was a bit scary. In Upstate NY pools aren’t exactly a selling feature and we had no idea the condition or if it even worked. All I could tell was it was still holding water!
Behind the pool area is about 1/2 an acre that depends to a creek bed and it was so over grown we found a baby fawn who had been born that morning in there but could see very little. The ash Blythe also came through and within the 4 years we have lived here all the ash trees in thick woods died. There were rotting trees, over growth into the pool and patio area.
So we had to basically deforest our back yard in a suburb area on a 1 acre lot! The deck was ok but footings had not been placed correct. The patio was a hot mess, sinking with uncontrollable weeds growing everywhere, missing pavers and the like. The patio around the pool was discolored from years of over growth as well as drainage issues causing some of the siding to rot and water to accumulate in the basement. The pool, well when we finally opened it we discover a 60’s era plaster pool where the top border of tiles had been removed and plastered in and all that plaster was failing and large 4ft chunks had broken off and fallen into the green, nasty water! We didn’t know if the pump worked, the pipes were cracked nothing but set to work!
This year we finally got around to repairing this pool new plaster, primer and paint, really scrubbing and power washing the deck. We took apart the patio and relabeled the ground, added new fill ad replaced pavers. Fixe the footings on the deck and the drainage around the house. Coupled with the 4 years worth of deforesting the back yard, by hand we didn’t hire anyone and have been downing these trees with a standard chain saw, winch and cutting up.

The damage we found that doesn’t show that there was a broken pipe from the bottom drain to the pump. But, the pump did work! 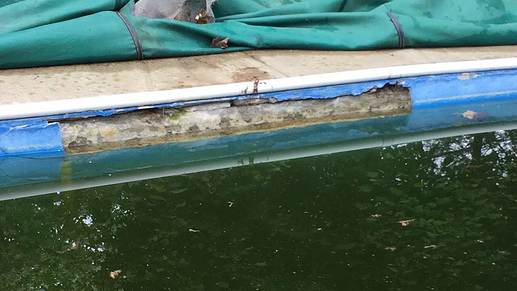 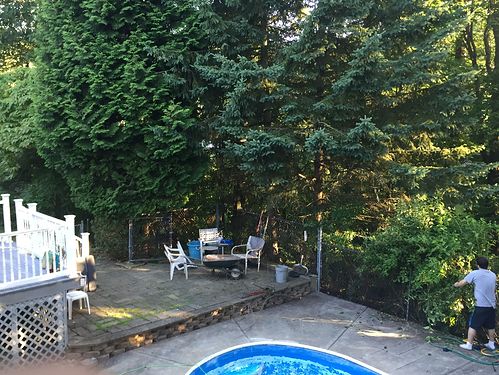 IMG_07193264×2448 1.21 MB
Trees and bushes that grew into and through the fence around the pool that all had to be removed as they were not only preventing airflow and sun they were causing damage to the retaining fountain the pool is built into 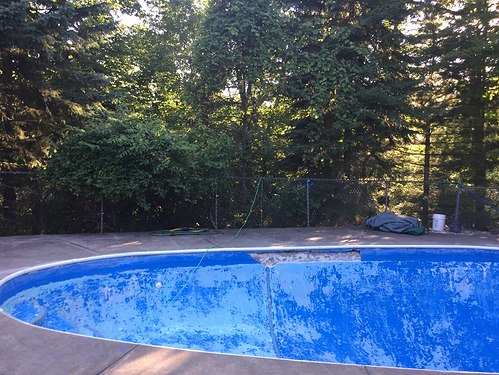 IMG_07093264×2448 1.71 MB
Then after draining time for muriatic acid and scrubbing which revealed that the last paint used was the wrong type so it all failed! But, the patching occurred and clean up. 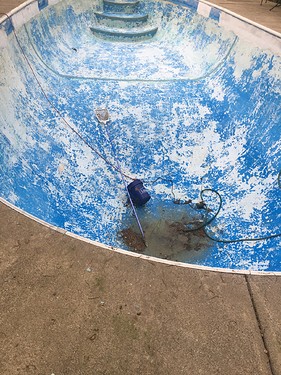 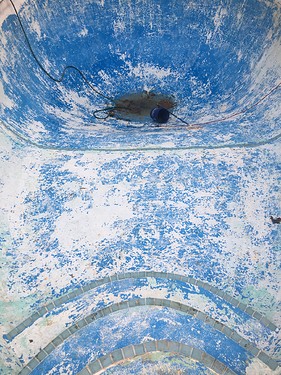 IMG_11791512×2016 1.8 MB
We then had to find a solid 7-10 days where it wouldn’t rain in upstate NY hahaha! We did finally bite the bullet and went for it and primed with a product I can say is like painting with marshmallow fluff as its hardening! It was white and the deep end goes down 12 ft from the surface. It was like being in a solar oven! Waited a day then set to work on painting with a new layer of epoxy which we now could because of the primer system. It was something you just had to start and could not stop as the paints a catalyst mixture so you have an hour from pouring to getting it on! Then for days we watched the weather! It rained lightly a couple of times which wasn’t that bad. Each am my chore was to go down in the pool, pump out any water and then to dry the entire pool off so that it could cure.
It all paid off though and we were finally able to fill it! 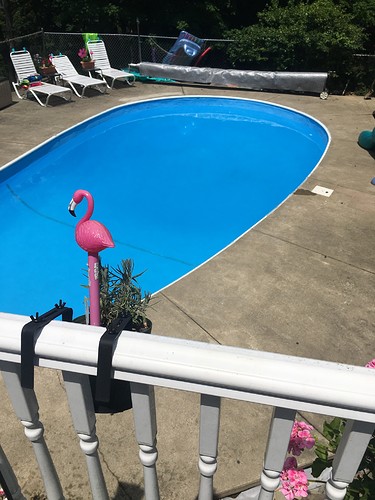 Anyone else planning a vacation to @Bugaboo 's resort?

You worked so hard and it shows! All your lovely touches really make it feel special. You have plenty of relaxing space, a space to eat or drink (or both) and play space for the family and their friends…

This was a fun project to see come to fruition!

Anyone else planning a vacation to @Bugaboo 's resort?

Anytime! Open invite! Martinis and Margaritas are generally on the menu and Beehives are optional!

Awesome! I’ll know who to look up if I’m ever in upstate New York!

Zowee! I can’t even mentally start to figure out how to fix that pool - what a Herculean task! And such a lovely result. I want to come float with you!

LOL we now say we could probably open a pool store with all we have learned and done on our own!

It really does look like a resort! Job well done!

HOLY WOW! What a glorious result to all your hard work and effort!

You will enjoy that pool so much knowing you put in all the work to make it nice. It looks fabulous!!

When are you having us over? LOL! Looks fantastic!

Anytime!!! I love big get togethers, I have hosted a few things in the past year but no where close to the size of my normal hosted parties. I need company!!!

Wow! You did an amazing job. I am a do it yourselfer, but I can’t imagine tackling a project like that!

When I was a teenager we lived in a house from a similar era, with a similar pool. We bought the house and yard in GREAT condition but had to redo the pool the second year just for maintenance and I gotta tell ya, doing it in the best of circumstances is bad enough. Huge kudos to you! It looks amazing!

You did an amazing job and it shows!