When the Common Ground swap didn’t pan out, @bunny1kenobi and I decided to go ahead with our own personal swap.

I have a whole bunch of ideas floating around in my head things I wanted to make for her, but I couldn’t really get them to “fit” into the Common Ground idea. I finally settled on the idea of * I really want to make her some pretty dangly beaded earring in teal.* She and I both love teal, she loves jewelry and I suddenly needed to find a way to make something I thought she’d love.

The problem is: I’m not a jewelry maker. I had no idea where to even start.

I went to Hobby Lobby and stood in the beads and jewelry findings aisles for more than 20 minutes trying to figure out something I thought I could make and that she would love. And, figuring out of I had the supplies I needed. I finally settled on pretty teal seed beads and I found this really nice finding where I could attach 9 dangly parts to (that’s the official language, of course.)

However, I noticed I would have to attach something into the center of the finding, so I found the gorgeous teal round glass beads.

My original idea was to only string the seed beads to dangle, but I ended up with two strands of the teal glass beads, and decided that they would really make this a statement piece, and I am so glad I went that route.

I also purchased a “kit” that has the earring makings, which helped. I had a place as for which type of the long part (again, official language), but don’t tell anyone that I accidentally messed my plan up which is why they are not all the same on one earring and are different from one earring to another. (oops).

Adding the bead into the center was the trickiest part because even though the bead fit, when I put it on the wire, it was slightly too long. I really struggled, and I ended up using some thinner wire I had in stash. The finding at the bottom of the bead I had received in some swap ages ago on the other site.

I think they are absolutely beautiful. I myself don’t really care for such extravagant and large jewelry, but I can appreciate it’s beauty!

It was really fun playing around with a new craft.

What Bunny doesn’t know is that I made myself a pair --simpler, but with the same beads, so now we have that in common, too! 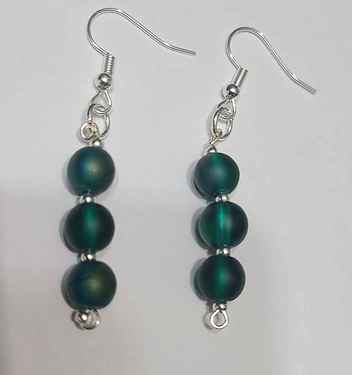 Thanks for swapping with me, and I hope you love your new statement piece!

Wow! No one would suspect you were a beginner. Very pretty!

The earrings are beautiful! I hope you’ll keep making them!

Beautifully done and love the colors.

Thank you so much everyone! I’m excited to play around with jewelry making more!

Those are so pretty!