Some time ago, I attempted to make myself a shirt with lyrics from the song “Defying Gravity” (from the musical Wicked) but I bought viny that wasn’t HTV. So, I applied the glittery vinyl to a canvas and gave it to our music teacher at school for her to hang in her classroom. I still had plans to make a shirt for myself, so when @Edel (who waited very patiently for me to finish it) asked if I’d make her one, too, I ordered up some green glitter HTV. I got the first one cut, but it was a beast to weed, so I put it aside. Then, life intervened, and, in the meantime, a couple of the letters fell off the HTV sheet. When I tried to cut the second one (and a few extra letters to replace the ones I lost), it did not cut properly at all, and I ruined the entire sheet of glitter HTV. I swore I’d never buy glitter HTV again! It’s pretty scratchy on the shirt, anyway, so no great loss, in my mind.

Instead, I picked up some nice bright green HTV and cut the design again. It was still a beast to weed, and I realized about halfway through that it was because, for some reason, the cut lines around (and inside) each letter didn’t connect, so I had to use tiny scissors to cut away the last bit (I was at my mom’s and she didn’t have an X-acto knife). But, I finally got it weeded, and I think it came out pretty great! It looks crooked in the photo, but I’m pretty sure it’s straight in real life 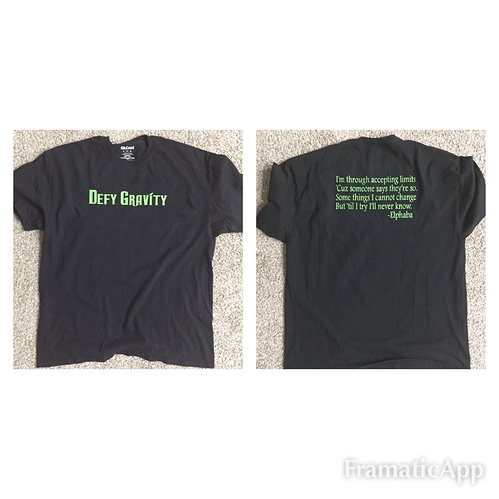 I didn’t cut myself one, because it looks like I’ll need to change the font for the text on the back. I’m not torturing myself with the weeding of that font again!

It’s completely straight in real life and my daughter (and I) love it!

Whew! I did measure, so I’m glad to know it isn’t crooked

I don’t even know if I can get HTV here, but at least now I know that I shall stay away from the glitter XD And in the end it looks great, even if it did take some time to finally finish XD 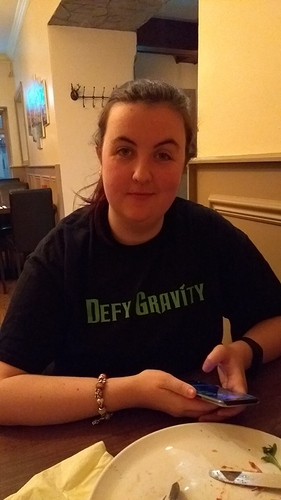 It looks great on her!

It does, she’s a musical theatre fan and wore it to a dance rehearsal last night, they’re doing fiddler on the roof. Everyone there loved it too.

Sad you didn’t get to make one for yourself.

I can hear this song in my head. It’s been a hot minute since I’ve given it a listen, and feel like it’s going to happen today.

I appreciate you persevered to make this excellence!

You are one dedicated crafter!