In the spirit of sharing even those things I do not consider myself fairly good at. This is a digital drawing of Shadow and Mr. Squeakers. 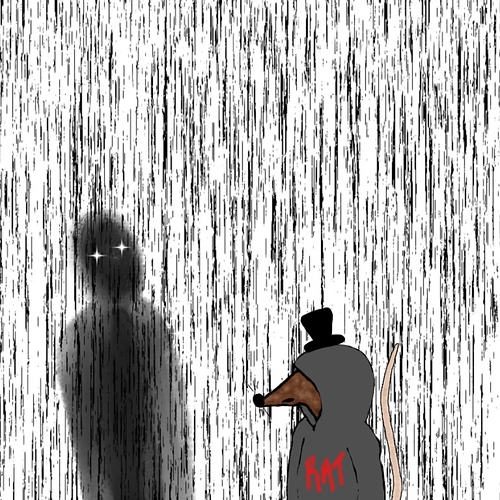 Shadow: Mr. Squeakers, I cannot tell you how glad I am that you contacted me. I did so wonder if we would see you again after the Johnson Massacres.

Shadow: Indeed. The body count was quite high; wise of you to lay low. But I am glad you have returned as I have a very important job for you should you be willing to take it on.

Shadow and Mr. Squeakers are based on characters Ari and I created on a walk. We are considering turning their conversations into a short webtoon series. The premise of our two characters is that Mr. Squeakers is an assassin. Shadow frequently contracts his services; does Shadow work for the government or a private agency? Who knows? But the funny part (to us at least) is that Shadow has a tendency to also request the most ridiculous services from the ratty assassin including picking up milk for his elderly neighbor and rescuing cats out of trees.

I think perhaps the true art is how we come up with the stories. Ari and I actually have impromptu conversations as these two characters while walking about the neighborhood. I feel like this is maybe a really weird thing. Is this a weird thing?

Anyhow, to prep for the possible webtoon, I drew them using an app Ari uses. Somehow I got roped into drawing them both.

Fitting as Mr. Squeakers contribution to all conversations is to merely squeak and squawk. Yes Ari takes on the role of Mr. Squeakers.

Ari would like me to acknowledge that squeaking and squawking is a lot of work and really hurts your throat.

That’s so cool! The story is even more adorable than the characters - I wouldn’t want to underestimate the difficulty of squeak work!!

Such a fun backstory

I hope that the webtoon will work out

What a fun adventure story! You should make more!

this! So creative! Hope to see more of these two in the future. Keep us posted?

This is the best. Having a relationship with someone that involves inventing characters and stories, being the characters, etc is definitely one of the best things in the world.
I really like mr shadow’s star eyes, and the “rat” hoodie. For some reason it gives me 90’s vibes.

Having a relationship with someone that involves inventing characters and stories, being the characters, etc is definitely one of the best things in the world.

The kiddo and I do this a lot actually. We have a silly song we made up about daffodils called daffodilly. I should do something crafty inspired by it one of these days. We also came up with a silly story about a man who adopted 100 dogs and then ran for president on a platform of “a dog for every household.” His arch nemesis ran against him on a platform of “cats rule.” Spoiler: they end up together, reconciling their differences, and joining their cat and dog households. And so many more. If we take a walk we come up with something odd to entertain ourselves. And it’s delightful fun though I’m sure if people overhear us they think we’re super weird.

Awesome! My bf and I do this (Well, this kind of stuff) all the time, and anytime I get self conscious about it, he laughs it off “no one knows what we’re talking about!” It’s fun and keeps the creativity flowing. We can walk and talk forever! I’m sure it’s really good for your kiddo too.

Oh, I am so loving all of this!
My 2 kiddos don’t really imagine that much, never did “imaginative” play. I’m wondering if trying something like this might help with that aspect, might help with social skills too.
Umm. Worth a go.

(It almost reminds me of the Cube/Rusty Lake series of escape game apps.