Double sided knitting in the round video. Holy halibuts, Batman

Double sided knitting in the round

Every once in a while I’ll watch one of these videos to try to figure out how to do double sided knitting, and it just hit me to try and find one in the round. The only thing I can say watching this guy do it, Holy halibuts. My fingers get stupid whenever I try anything fancy like that, heh. Still, something I want to give a try for my beret/tam/whatever pattern I wrote two years ago.

Might be because I’m not a knitter, but I’ve never seen that kind of knitting before, I’m intrigued and wonder if it might work better for me because my issue with knitting is that my loss are too tight or too lose. I mean, it still looks super confusing, but might work out for me

Thanks for sharing, and good luck trying it

That looks awesome. The cast on is a little bit like Judy’s magic cast on with a twist… I have a suspicion my fingers would get kind of stupid with one yarn in each hand, plus I pick the yarn so throwing with just one hand would be spicy enough… But I do want to try! It looks so very neat.

Of course, it would take a lot of practice and some brain rewiring to get used to new hand motions and actually get it that neat too.

This excites me for the same reason I got stupidly excited about double heelix socks! 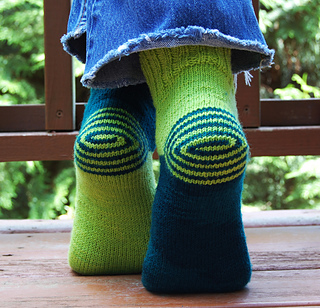 (Note: English version is available at http://www.knitty.com/ISSUEff11/PATTdoubleheelix.php, not as a Ravelry download.)

I liked double knitting on one needle like he is doing there, but never did enough of it to build any speed. Doing it in the round looks more complex but also more fun and useful!

I’m intrigued and wonder if it might work better for me because my issue with knitting is that my loss are too tight or too lose.

Maybe… Finding a technique that feels comfy is important, but to get the tension right you just need tons of practice. Cast on and knit something that doesn’t have to become a pretty finished object and work on that on and off just to get a feel for what your hands need to do to get a consistent tension, and build muscle memory. If it looks sloppy and the width varies, who cares? You’ll get it after a while and it’ll start looking more even. Keep the ugly bits to see your progress.

I had a doll blanket going when I was a kid. It was a pattern of squares made up of knits and purls, not very complicated, and it never got ”done”. I ripped it out a couple years down the line, but my hands remembered how to knit and purl and keep tension years and years later when I picked up the needles.

Thanks for sharing…I like the video…much clearer than some I have seen.

This excites me for the same reason I got stupidly excited about double heelix socks!

Whoa! I’ll have to attempt those as well as this method for the cast on for the stuff I do in the round.

Funnily enough, I like knitting in the round more than knitting rectangularly. The only thing I haven’t figured out completely is changing the number of sections and how to do different kinds of edges (except for pinwheel knitting. Edges on those are fairly easy).