I’ve had this dress for 4 years, but have worn it only a half dozen times.

I love denim dresses, and the embroidery makes my heart go pittypat.
But the shape is boxy and the laced neckline looks like junk.
It’s a few sizes too big; I’ve taken it in at the sides twice.
It’s a bit too short; just grazes the top of my knee. I added the lace on the hem to make it cover my knees.

I would love to remake it as a jumper, so I cut it at the shoulder seams and started playing with it. 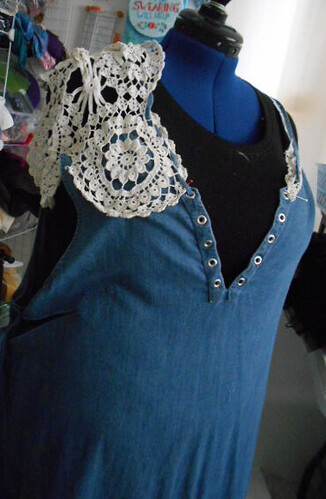 DSCN0204370×566 58.6 KB
a doily shoulder seemed like a good idea, but looks a little heavy. I would cut the doily to give a single row, instead of the double row of circles, but still a bit much. 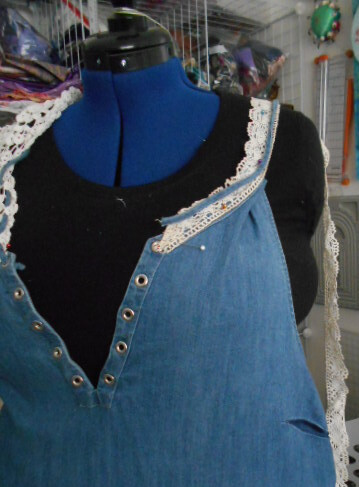 This looks better, but now it’s getting too skimpy. I don’t know that it says jumper.

I think all the neckline lace would compete with any blouse I wore under it. I don’t have any matching denim, except for the lacing–that’s the blue cord on top of the lace.

It would make a really cute sundress, but I’d be falling out of the Windows of Hell armholes (costume reference, sidelesssurcote). I’ve got a couple extra inches of fabric at the sides, but not enough to close up the armholes.

So, um, any suggestions? 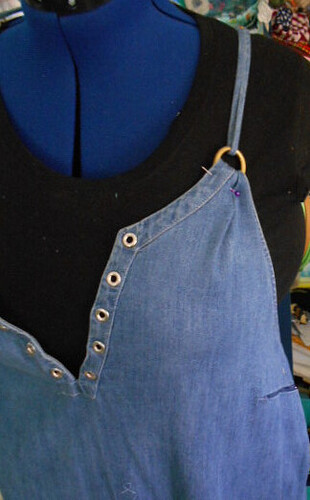 DSCN0206324×522 43 KB
This might work better for a jumper. The real, solid brass D ring is gorgeous, but makes the silvery grommets look bad. I could try to find a silver D ring, or just loop the cord through the casing.

And I’m trying to figure out what the back should look like, too!

I have zero Ideas but I’m feeling like @AIMR could think up something.

I think my real problem is that I’d like to wear it as a sundress sometimes, and as a jumper, over a blouse, other times.

But it’s too skimpy to wear alone–my bra and/or anatomical parts will show.

Since I don’t have extra denim, I’d have to fill in with something like lace to wear it alone, but the fill-in will look too cluttered if I wear it over a blouse.

maybe I need something like a saree blouse–thin, short, lightweight, cool–to wear underneath when I don’t want to wear a regular blouse. The underblouse could be lace. In fact, I have a vintage lace bodice I could probably rework. It’s from my wedding dress, which I’ll never wear again… 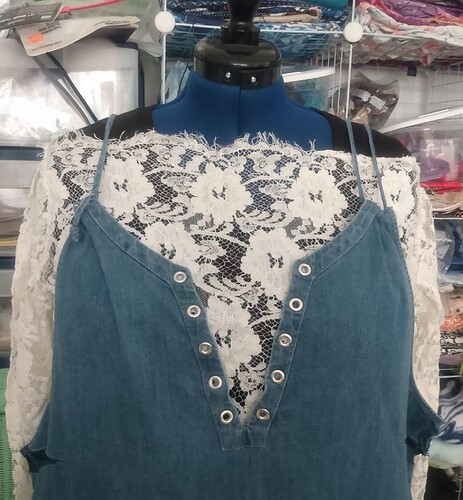 agreed. It looks scratchy, too.

what about- ok, disclaimer is, once again, I have no idea what I’m talking about here, I’m just spit-ballin’. I don’t actually sew so…

What about cutting the sides open all the way down, stealing some denim from there and using a totally different “accent” fabric to give it some swing and allow you to use the denim up top? Is that making any sense?

Interesting idea. Kind of like those skirts made by adding a triangle of fabric to a pair of jeans.

If you spoke sewing, you might phrase it, “add contrast gores to the sides.”

In case this is still relevant: Have you thought about eyelet fabric for the armholes? Maybe from one of those summery crop tops that is basically only a short and wide tube that has elastic both on the top and bottom. Thinner from a shirt or sturdier from a tablecloth? I think both the kind that has the embroidery just along the margin or all over would work.

It’s still on the mannequin with pins and no decisions.
But I just bought a full denim skirt, so I’m thinking that could become a jumper, and the existing one a sundress. I have some nice white eyelet that used to be a blouse, maybe I’ll try something with that. thanks for the idea!