May I present to you our nautical-themed duck palace! Ta dah! 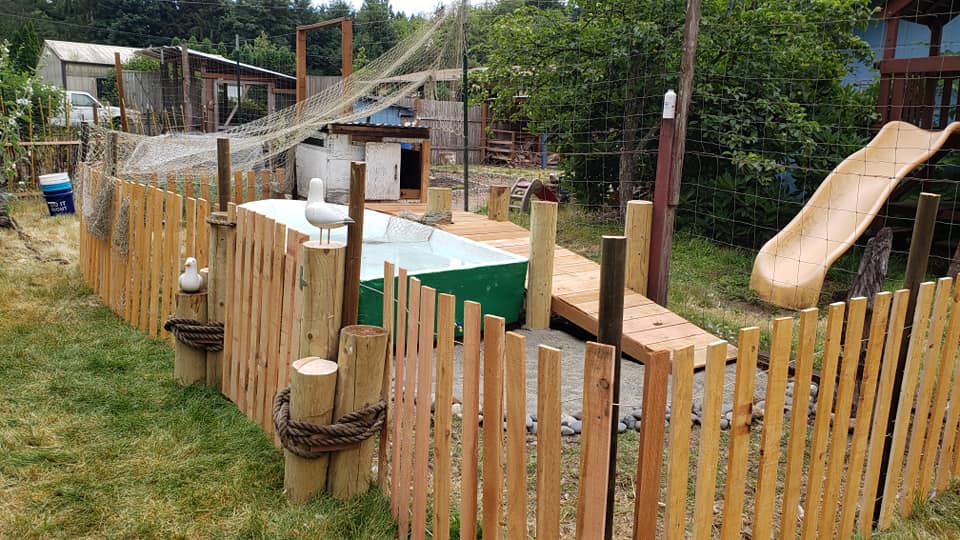 For the past two years, the ducks have been penned in various places around the garden, the fence consisting of leftover chicken wire and hardware cloth from other projects. They did have a children’s wading pool, but that was hard to dump and clean, so they got downgraded to a ladybug sandbox. Between that and the scrappy fencing, it was the duck ghetto. I’ve wanted to do something better for awhile now, but it hinged on finding a free bathtub. Alas, when the need arises, there is a dearth of free bathtubs on craigslist. But! Serendipity struck in a different way. I found a free row boat! And on the very same day, a free mini dock (it had been a photographer’s prop). Woo hoo! Well, I scored the boat, but the dock got snatched up. But that was enough to spark my imagination, so I drew up plans for a magnificent beachy duck palace.

The boat was past its seaworthy days, but my husband managed to get the little holes patched and filled and then sprayed the inside with FlexSeal and gave it a new coat of paint on the outside. It took him, myself, and three of our children to carry this monster out to the garden yesterday. Oof. We are all feeling the effects of that. He installed a pvc drain pipe in the stern with a spigot on the outside so that we can just hook it to a hose when we want to empty it (and water the garden!).

On Monday, dh and I went to a salvage place and got the rope and the fishing net, and got the big poles at a farm store. The little seagull buddies, carved pelican, and river rock were all on the property when we bought it (but all in different locations). Don’t they look happy together now? 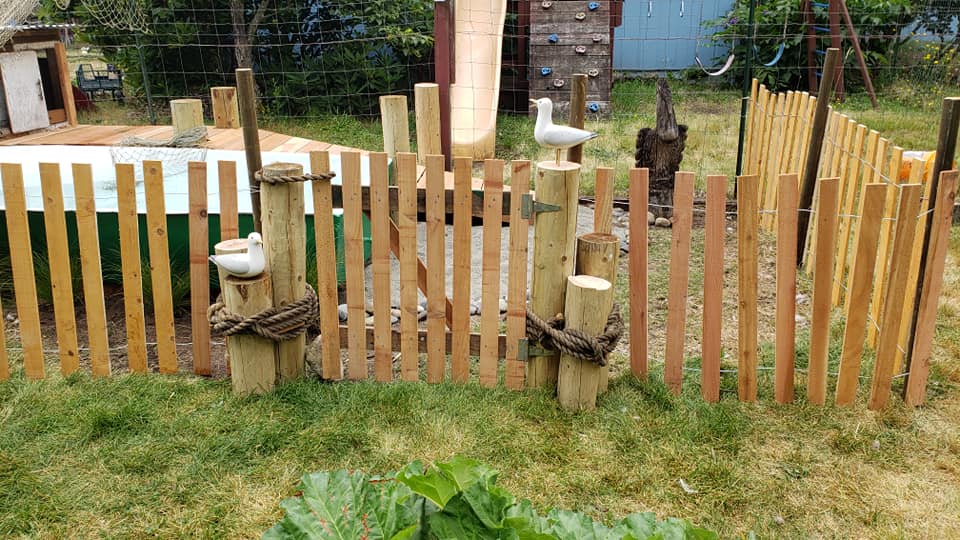 We built the fence out of regular fence panels ripped and sawed in half to make pickets and 12 gauge wire to mimic beach fencing. Once again, it took five of us to stand it up and set it in place, this time because it was so wiggly.

Dd #2 used the chop saw to cut all the pieces for the dock after ds #1 had measured them, then dh assembled it all in situ. 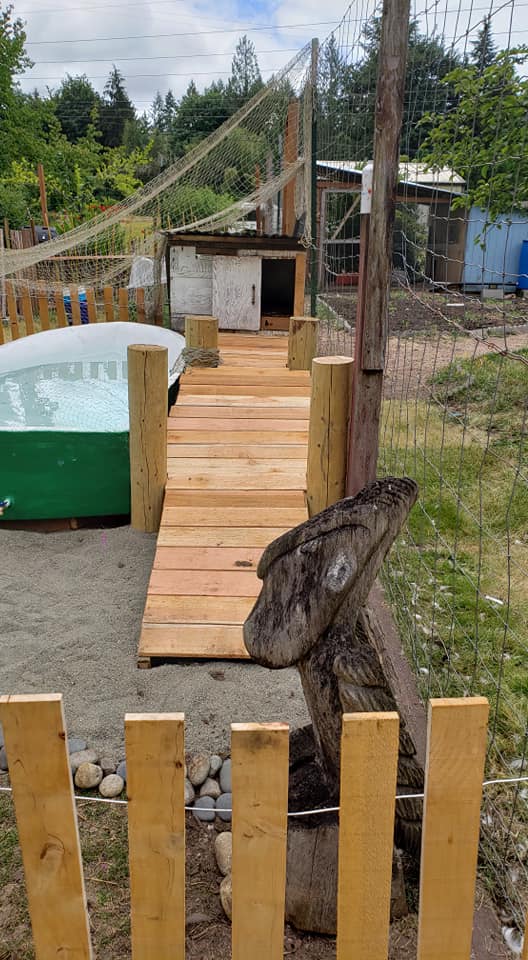 The house is the same house the ducks have been using – two doghouses that were left on the property that we cobbled together and put a metal roof on. But, it underwent a makeover, too! We flipped it around so that the double doors now open on the back – making cleanout and egg retrieval easy for us humans, especially since we won’t have to walk in their poopy pen to do it! Then dh jigsawed out a door on the former back/now front and attached it to drawer slides. All we have to do to let them out in the morning is to put a hand through the wire garden fence and pop the latch. Easy! 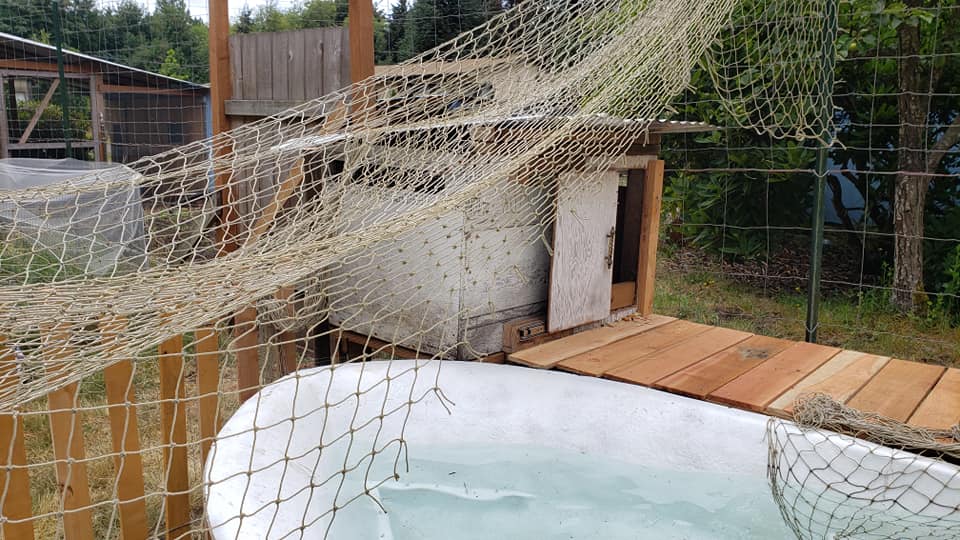 Duck palace (2)960×540 102 KB
The now-front with the sliding door opening out onto the dock for easy pool access. The net serves the dual purpose of aesthetics and preventing the ducks from launching themselves out of the pool and over their fence. The little scrap of net on hanging into the boat from the dock was intended to give them something to grip when they want to exit, but so far they prefer just jumping out the back onto their beach. 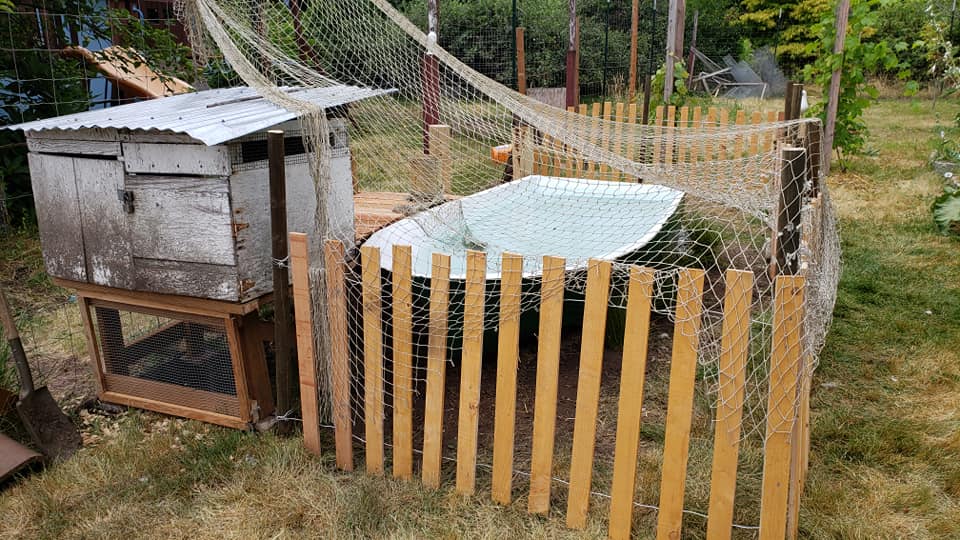 Duck palace (5)960×540 116 KB
And the back with the old “front doors.” Underneath the raised house are the water bucket and food pan, accessible by a hardware cloth door cut down from the gate to the last iteration of Duck Ghetto.

We did have to buy some new materials for this project, but I’m pretty proud of how much old stuff we reused or repurposed! After we completed it all this morning, I spent the afternoon just sitting out in the yard watching the ducks explore their new digs. I think they like it. 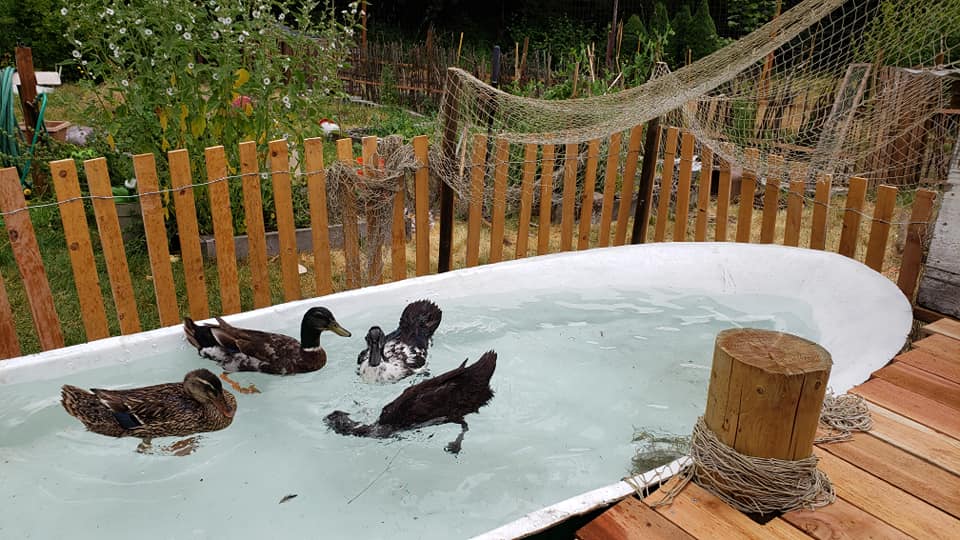 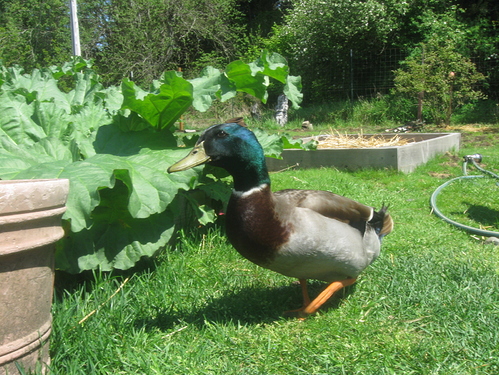 Haha! Sir Francis the Drake should indeed be captain of a ship! I love it! And your little beach duck habitat looks like a happy place for all your fine feathered friends!

Sir Francis! Wow! That is so cool! You did such an amazing job.

Wow!!! This is amazing! What a huge project! The ducks must love it! The seagulls are so perfect atop those posts, and the boat was such a cool addition! Plus a custom dock! It’s like a theme park for those little guys!

This is FANTASTIC! Any good tallship’s Chips & Jemmy Ducks would be proud of you!

This is just amazing! The boat is way better than a bathtub! I love how the old duck house looks like a sea shanty. You should add some old wooden buoys to it! And, somehow, I never thought about keeping ducks, but now, this makes me want to someday. And, Sir Francis is a handsome duck, for sure! What other types of ducks do you have?

WOWZERS! This is… ducking amazing! So much cool enrichment and so fun for people to watch.

looks like a happy place for all your fine feathered friends!

haha Apparently so, because one of my chickens keeps hopping her fence to go check it out!

It’s like a theme park for those little guys!

My kids are a little jealous.

Although I think just the sight of it has inspired some new play on the swingset just the other side of the garden fence. I overheard my boys playing some kind of piratey game the past couple of days.

Any good tallship’s Chips & Jemmy Ducks would be proud of you!

Ok, I admit, I had to Google, but I’m up to speed now! lol Thanks! I see you’re in the PNW – did you by any chance go to the Tall Ships festival in Tacoma a few years back?

This is just amazing! The boat is way better than a bathtub! I love how the old duck house looks like a sea shanty. You should add some old wooden buoys to it! And, somehow, I never thought about keeping ducks, but now, this makes me want to someday. And, Sir Francis is a handsome duck, for sure! What other types of ducks do you have?

Thank you! Y’know, I think you’re right about the house. When we were putting it up on the stilts I kind of regretted not painting it while we had the chance, but once it was all together, I think the weathered look suits just fine! The acquisition of my ducks was not planned either – we were at Tractor Supply buying rabbit food when I saw the ducklings and fell in love. That was… 3 yrs ago now. So Sir Francis and the lady friend (her name is Matzoh) to the left of him in the group pic are both Rouen ducks – like Mallards but bigger. The one to the right of him is Saltine and she’s a Black Swedish. The little one who’s got her head under the water is the offspring of Saltine and Sir Francis, hatched last summer and her name is Ritz. They’re all quackers.

Oh! And I actually found some little buoys at the salvage yard for 50 cents a piece! I just haven’t strung them up yet.

This is… ducking amazing! So much cool enrichment and so fun for people to watch.

lol It really has livened them up. And they are fun to watch. Even before they had this magnificent ducky playground, I could sit and watch them for so long.

Yes, I was at Tacoma tall ships! I have crewed on Lady Washington (just a journey, not full time) and sailed smaller sailboats all my life. Salt water is in my blood!

And am a huge Patrick O’Brian fan. Jack Aubrey would approve of your duck yard!

This is utterly adorable and totally cheered my day.

Oh that is cool! We went and I just loved it. My girls were toddlers then so they don’t remember it, unfortunately. I wish they would have been able to do another one. The Lady Washington is beautiful. What a cool experience that must have been! I was reading a book last night and the first two chapters were all about a storm at sea and what it was doing to the boat and what the sailors had to do to keep her going. But I am boat ignorant so I only barely followed.

I’m going to have to re-read it with a nautical glossary at hand!

Aw, I’m glad! I was cheered this morning, too, when I let the ducks out and they ran down their dock and jumped in the boat. It makes me laugh how happy they are.

Putting the PVC and spigot on the boat is pure genius! Cleaning will be so much easier now. The area is absolutely wonderful You have some lucky ducks.

I need to see a video! Cute, happy ducks =

This is amazing!!! So wonderful of you and your family to make such a stylish living space for your feathered friends, complete with all the amenities!! Love it!

I will try to oblige! We’ll see whether I can figure it out or not. haha

I bet you have the happiest ducks in the state!

This is so cute! What a great culmination of ideas!