My brother-in-law let me help him (help being a very relative term considering I just couldn’t do much) with changing a motor out at the feedyard. Anyway, he gave me a bit of money so I was able to buy “The New Catalog of Maya Hieroglyphics, Volume 2” and get me a drawing tablet (Ugee M708) and have been trying different things. 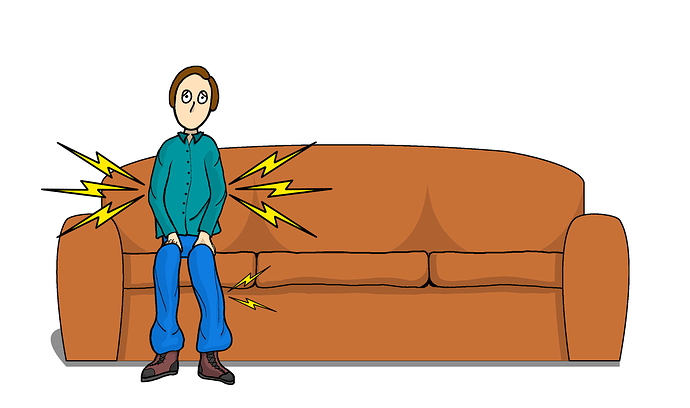 This Chronic Ed, the couch was the only thing I made in the svg editor, the cushions and rest were all hand drawn on the tablet on gimp. (Looks like I’ll want to update my system once the new version of Slackware comes out, as it sounds like Gimp has a lot of updates that will make drawing with a tablet easier).

I am definitely getting better at hands, and it looks like it’s easier for me to draw normal hands than the three fingered hands I had been drawing. Who’d’a thunk it? Heh!

Plus, I really like how the clothes came out in this as well. Also, the way he’s sitting is really awesome, too. It’s one of the ways I sit down when the pains get to be so severe I can’t move (It’s as boring as it looks, HAH). I really can’t wait til I finish it. 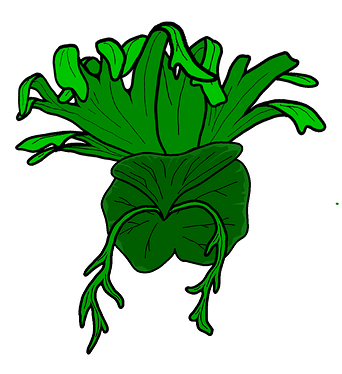 Platycerium suUUUUUuuperbum. For this version, I attempted to deal with overlapping and (rolled? laying?) leaves. A couple of pictures I found of P. superbum had one of their shield leaves sticking out (that’s the center shape), and the way it protrudes from the base of the plant makes me think it’d be perfect for…erm…what’s the word I’m looking for? an implied head. (Meh, the word works, heh).

Anyway, if everything goes well, I should be able to start my P. suUUUUuuperbum comic in a couple of months (but as everything has been going lately, I am not saying I will have it ready. I have been feeling really really really weird lately, O_o).

Good to see you here! And I hope you feel better soon. I’m impressed how you just keep working through the pain, and always trying new things! Your skills keep getting better!

the digital art looks really good. I like the shading on the couch. I’m intrigued by the P. Superbum drawing. All the greens add depth.

Wow! The wrinkles on the fabric make them look so realistic. Lovely.

Great drawing! I think your shading, and the structure of the things you’re drawing, are looking fantastic! I’m so glad you’re finding ways to keep going with your creativity, even when day-to-day life is a struggle.