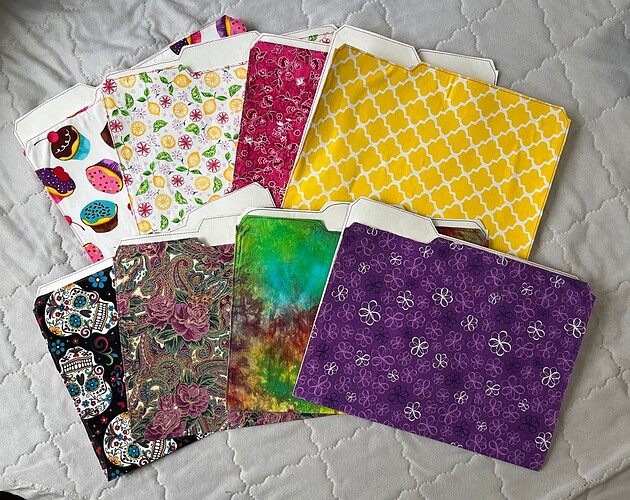 I made these for @Bugaboo for the fill a flat rate box swap. I wanted to decorate some file folders for her and tossed around a lot of ideas. I finally settled on this and I’d never tried it before. I learned a few things during the process that will be helpful if I ever do this again.

How’d you end up doing these? They look great!

Wow, paperwork just got a whole lot more fun!! These look great and would definitely brighten up any sort of mundane task that requires file folders and just increase the enjoyment of any ‘non-mundane’ tasks. I love these!

Pretty! Did you sew them?
Another option is fusible web. It sticks well to both paper and fabric. And wood!

These are super fun! And would look a lot better out of the file drawer than plain folders. I, too, am super curious about how you did it!

So pretty! Would be a great way to enjoy fabric designs. When I attended a lot of meetings, it seemed like there were always a few things I needed to tuck into a file folder to take along. Your file folders would be a beautiful way to do that.

I just used good ol’ fashioned school glue, applied thinly on the outside of the folders a small-ish area at a time. (I used an old loyalty card to spread the glue on the folder.) Then I smoothed the fabric over the glue and then laid them out to dry. You do have to be careful to maintain that fold in the center, of course. After they dried, I stitched around the edges, then trimmed the fabric. After I had sewn a couple, I realized that it would be wise to make sure that the fabric was glued all the way to the edges of the folder to help prevent the fabric from shifting, so a little more drying time was required.

Once everything was stitched and trimmed, I ironed all of the folders. (The pic was taken before ironing and I neglected to get an “after” pic.) I used white glue as a fray stop around the cut edges of the fabric, simply applied a small amount with my finger tips.

I like the fusible webbing idea @steiconi! I’d love to see someone try that option.

These are so fabulous!

What a clever way to use up larger pieces of fabric I love without a lot of sewing…I really don’t need any more pouches! lol…I could use a whole lot of these to store my ideas, patterns, etc. Love them!

So pretty! I would have never thought to add some oomph to paper file folders quite like this!