So way back in April when I was in full bore mask making, I decided I’d make a commemorative quilt out of the scraps. (I was and still am mostly using the fitted curved-center-seam style mask, so LOTS of odd shaped scraps.) But in playing around with something more structured than a crazy quilt, I put together a block that is basically a 9 patch, but with two HSTs and a QST. It’s reminiscent of a 9-patch style tulip block, too. I know this could be done with a full strip in the center or in other ways that make it not a 9-patch, but I figured it would be a good way to use smaller pieces of a similar color, too. 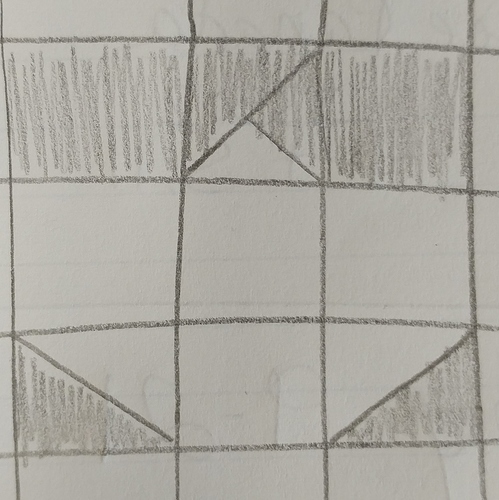 Then I played around a little with a block arrangement, and discovered a really lovely secondary pattern: 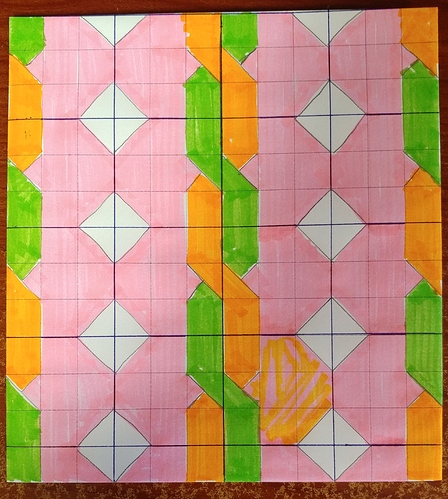 I know I’m not the only one working on or at least contemplating a face mask quilt. Does anyone else have any more structured block ideas? Foundaing piecing or other blocks that aren’t “just” scrappy? I think it could be neat to build a quilt not only of the scraps we’ve made from mask-making, but also a cooperative effort with other quilters doing the same thing.

Nice idea. I used a bunch of bits for a scrappy but didn’t like it, too many bright colors. I don’t have the patience for fiddly piecing. Fortunately, my neighbor’s niece wants even tiny bits, so i can pass them along.