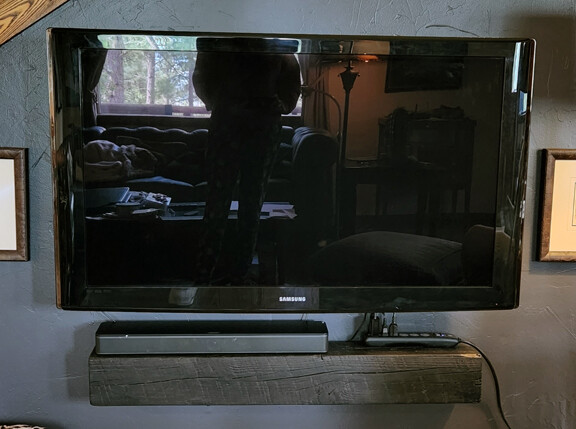 We finally decide to upgrade the technology associated with our television which meant that there were a lot fewer pieces piled around, so I decided to make a shelf! And I decided to try to make it as much as I could with stuff on hand.

I found this old, oxidized 6 x 6 that was almost as long as the TV (not updated) is wide. Good enough!

After giving it a thorough-but-not-deep sanding with the belt sander, I used an acrylic “stain” in ebony - the goal being to make the TV and it’s assorted stuff blend in as well as possible with the newly-painted dark grey wall. I didn’t want to lose the grain, saw marks, cracks, nail holes, etc, just make it all about texture rather than drastic color variations. 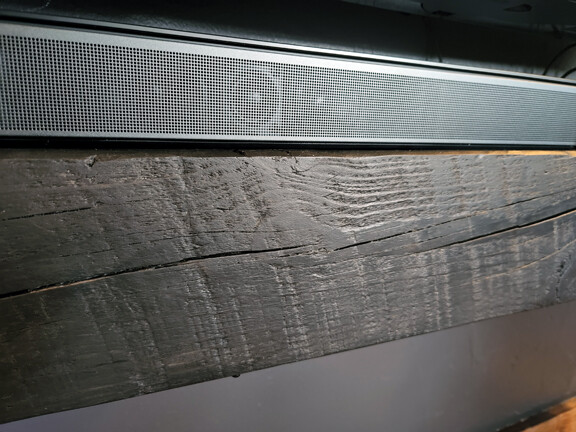 I hadn’t been going for a shou sugi ban, but as I finished the first side I realized that is what it looked like and that made me excited! I used these brackets that I found online - the only thing I had to buy! 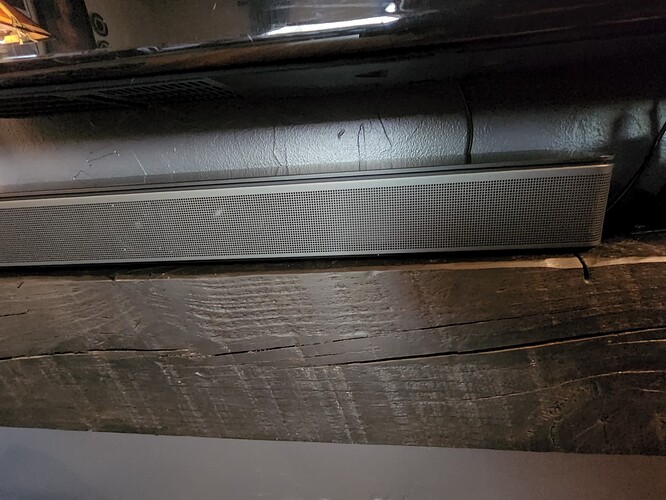 I will say that from what I have seen about actually doing shou sugi ban might be quite a bit faster. But that is supposed to be cedar and this is probably pine. Anyway, we’re pleased enough with the outcome that it almost makes us want to use the television more than every week or two! 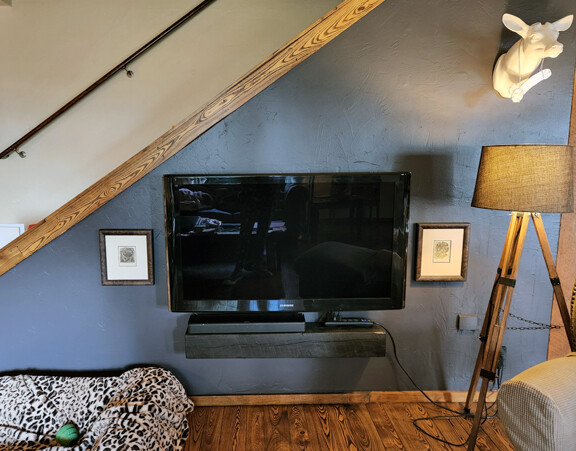 This ^ pic shows more of the wall it’s all attached to, but it also shows our deer, Mavis, wearing an obscene, stained glass necklace courtesy of TheMisterT’s sister. They are the kind of siblings who troll each other and this is a recent result of that! On display in my house.

This ^ pic shows more of the wall it’s all attached to, but it also shows our deer, Mavis, wearing an obscene, stained glass necklace courtesy of TheMisterT’s sister.

Great looking shelf! But burning would have been lots of fun.

Wow, that other method! I like how you kind of got that look anyway. (Would the charred board drop bits as things were moved on/off/around the shelf?) How nice to minimize tech clutter & cords, and “clean” a space to let in more room to live in.

Love the minimalist look of your floating shelf! Great job staining and installing it!

This is way cool!! Simple but effective!

But burning would have been lots of fun.

Yes! I totally want to try it now. I’m not sure if I have any cedar in my stash or if I’ll have a chance to get to it before wildfire season, but I do think I will give this a try sooner or later!

(Would the charred board drop bits as things were moved on/off/around the shelf?)

What little I have read about it, you do sand it when done AND it is used for siding houses, so I think it’s pretty stable.

It came out beautifully!

I love everything about this!