(I originally had this posted under ‘Snapshot - What are you working on today?’ but was asked to move it to it’s own post.)

Saw this fabric kit online but it was too expensive for my blood so just bought the fabric panels and did the bias tape. All 9,999.5 yards of bias tape. (I think I forgot some zeroes in there somewhere. lol That’s what it felt like in the process of doing them.)

Gluing the bias tape down helped a LOT to keep the squirrly things where I wanted them before sewing otherwise I’d have 42 pins per square inch in some places (and I’m not exaggerating by much.)

Anyway, I finished them about an hour ago. They are wall hangings I wanted to give my son as (ahem) his Christmas present. Good thing he’s an understanding sort of person.

I love the way the fronts turned out. And I figured out how to give some of the leaves and seeds texture by stretching the fabric a little bit before sewing them down. Just don’t look at the backs - I’m still learning.

These are the 3rd and 4th quilts I’ve ever made. (I’ve quilted other things, like a sewing machine cover and a little organizer hanging pod and am counting them, so I’ve quilted 6 things now.)

Each one took roughly 25 yards of bias tape. Thought I had enough black fabric but didn’t and had to get more. Then I hoped that black dye matched what I’d already done because, of course, I ran out of the bias tape I already had before I’d finished the first wall hanging. I had greatly underestimated how much I needed and was relieved when the dye on the new fabric matched.

If it was that much bias tape, just how much thread did I use zig-zagging it all down…???

I hadn’t thought of it before. Knowing this made me realize just how much I did on these and it has made me really tired. lol 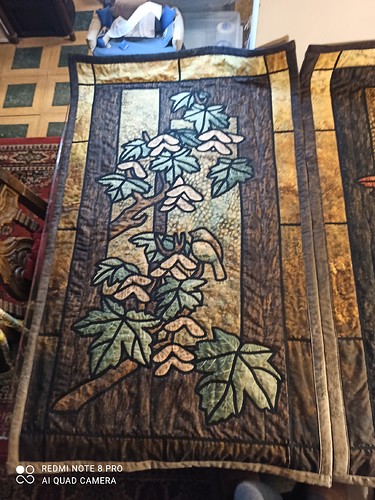 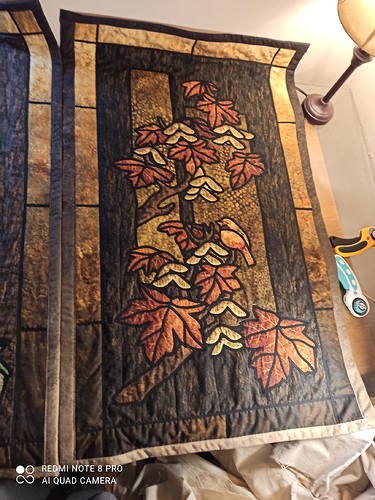 Wow. That was a LOT of work! They turned out beautiful!

These are stunning! Absolute perfection.

All that work was worth it, they are gorgeous!

Wow! They are amazing! I got tired reading about it, lol, but it was sooo worth it!

Glad you made a post here, too, now everyone can ooh and ahh over them!

What an endeavor, but so worth it. These are so striking! I’m so glad they have their own post where they can be more easily be seen and admired!

Will you share what size the bias tape is? As I was reading the picture in my head had it wider than I think it might be now that I’ve looked closer at the photos and it makes this all the more impressive. YEY FABRIC GLUE!

These look great! Kudos to you for making all that bias tape.

It turned out stunning!

How elegantly regal, like something from an ancient castle.
They make me think they’re part of a story, and I want to know the rest!

I used 1/4 inch bias tape…but, since hand made they probably aren’t exactly 1/4 across the board. lol

Really beautiful and stunning work. All that effort, but I know it will be loved!

These are simply gorgeous. The amount of time and love you put into them definitely shows!!