So, while I’ve been down at my mom’s in FL, I still have to do my remote teaching. This week, the kids have a mini project, and we needed some exemplars to show them. I vounteered to make the “not so great” exemplar. I originally planned to do it in the pool right when it turned on in the morning, but it turned on earlier than I expected, so I went with plan B.

The first challenge was figuring out what materials I had on hand to make my model with. I was able to print a map of Pangea and laminate with the new laminator I bought my mom. I forgot that I wanted to leave a bit of laminate around the edges and cut them right along the border, so I laminated them a second time. To make the shapes float, I hot glued some pieces from a pool noodle onto the back.

Since I missed the pool turn on (I only had one day to do it because I came up with the idea last minute and had to have my video posted online yesterday), I decided to use a pan on the stove (the hot water could act like the mantle). But, when I filled the pan with water, the pieces of the model tipped over.

I figured the project was scrapped, but my mom had the idea to use something sticky and water soluble. Inititally thought I could use honey, but realized that I had some Sticky Sulky Solvy, so I cut some small pieces off and used them to “tape” the model together, hoping that they’d hold together until the water got hot. It was mostly successful! 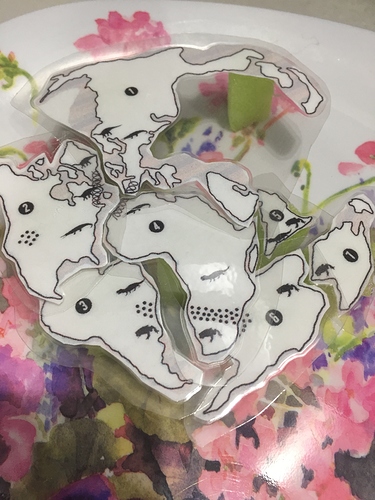 And here’s the link to the video I made (my first YouTube video ever!):

Very cool! Brave of you to dive right in - both on your example and YouTube!

Ack, now we know what happened to Atlantis! (land mass #2)

Hahaha! Yeah, it definitely wasn’t as successful as I had hoped (I probably could have made the foam pieces smaller). But, I didn’t have time to do a trial run, and it was the “not so great” exemplar anyway

Hey, you are quite a cool teacher! Great job getting the kids started and jumping in to make the video. I know they will be inspired!

It may not have worked quite to plan, but it was a great idea and I bet the kids will remember it even more for that!!

I’ve done something similar before in my classroom using fun foam pieces an a hot plate, but I didn’t have any fun foam available, so I had to get creative!