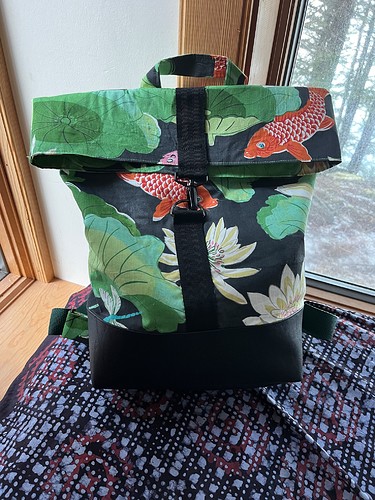 Finally finished this backpack that I’ve wanted to make since I first saw the pattern on Sew4Home a couple of years ago.The fabrics are from my stash and I ordered the hardware. Didn’t quite have enough webbing in either green or black to for the entire backpack pack so went with green straps and black accents. I’m happy with the way it turned out, despite being a slightly over ambitious in using black vinyl for the contrasting fabric.

View of the straps and the exterior pocket 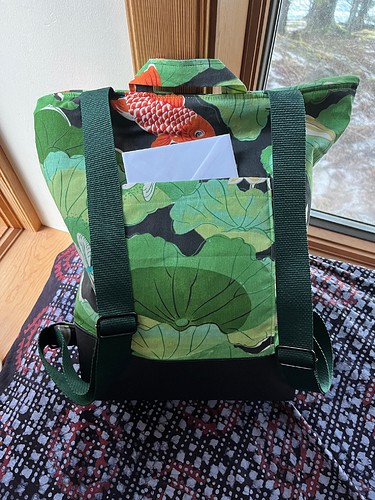 The inside is lined and has a pocket that fits a small novel. 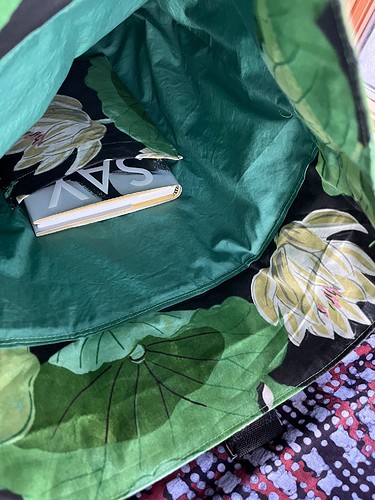 On my back to show size 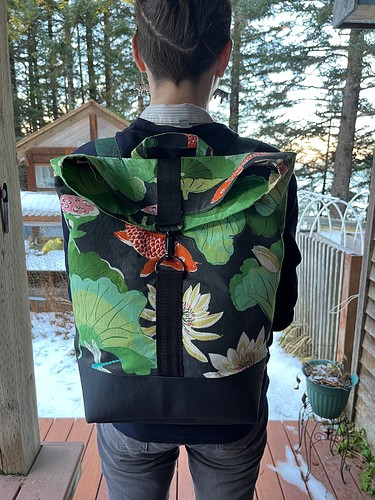 Love it! I have some pieces of leater that would work fabulous for this pattern!

I love this!! Do you happen to have a snippet of selvedge so I can figure out where to get some of that fabric?

This is so great! Love the fabric choice, and it looks very neatly put together!!

Gorgeous. I like the mix of strap colors, and love the fabric.

SOOO beautiful! I love the koi at the top. Thanks for the link, also.

I love this!! The little book pocket is awesome!

I love the way they koi fish folds over the top. Great fabric placement and construction.

The fabric is “Lotus Lake” by Waverly Fabrics. I got it about ten years ago. It’s kinda a funny story: While living in nyc, I babysat twice for a fabric designer at Waverly. The second time, her toddler son threw a tantrum after his parents left and ran out of the apartment (his parents has removed the deadbolt

). I chased after him without grabbing my phone or keys or shoes and we ended up locked out of the apartment. Fortunately a neighbor took us in and I managed to get back into the apartment by accessing the fire escape through the neighbor’s window. Once I got on the fire escape, I was able to climb through the son’s bedroom window which had been left open. As an apology the mom sent me a ~25lb box of fabric samples from Waverley. One of the best apologies I’ve received!

Thank you for all your kind replies

Well, that would make it worth it to climb through open windows!

Well that’s just gorgeous. Be prepared for endless convos in public about “where did you get that bag?”, it’s gonna grab attention!

As an apology the mom sent me a ~25lb box of fabric samples from Waverley. One of the best apologies I’ve received!

uh - that is an awesome thank you! but I will have to dig that up or design something similar - I’ve been inspired.

This is awesome - I love the style and the print!

Both cute and functional, and you finished it so beautifully and cleanly.

I hope you’re enjoying it! It looks like it will last for many years.

I just love it

The fabric is stunning! Absolutely perfect

I bought a pattern for a fold over backpack years ago but haven’t tried it yet. Now I feel inspired

YEEHAW! Your fantastic craft is one of this week’s Featured Projects!