Gentleman's wardrobe of the wayward bee 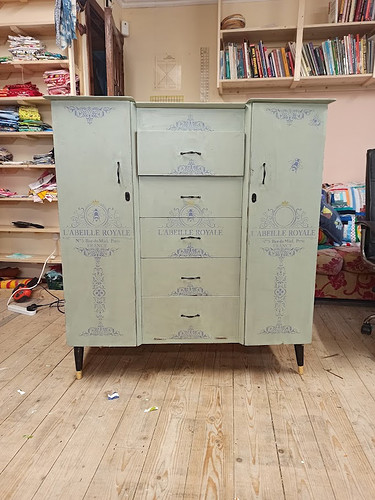 image681×907 181 KB
This was an old bockety (turns out the two people I said that word to today, who are both irish, have never heard that word, it is an irish idiom for something that is a bit wobbly and unstable) gentlemans wardrobe. 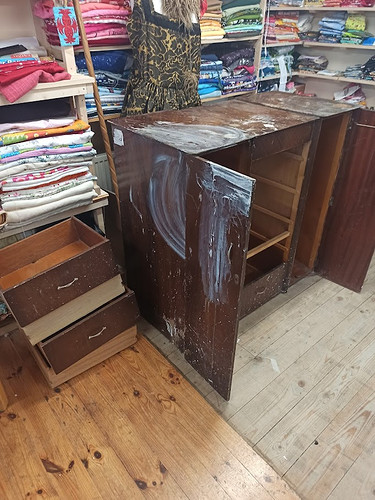 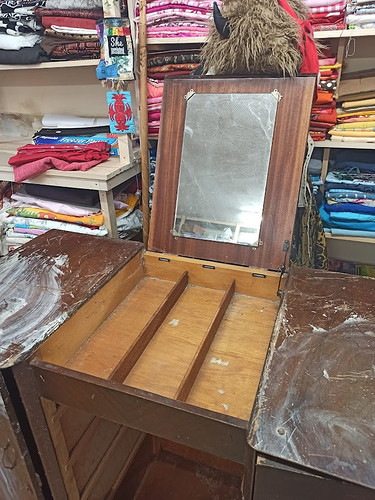 It was designed to take shirts and jackets in either side on the hanging rails, shirts to the right, because there is a tie rail on the door, and trousers and jackets to the left. 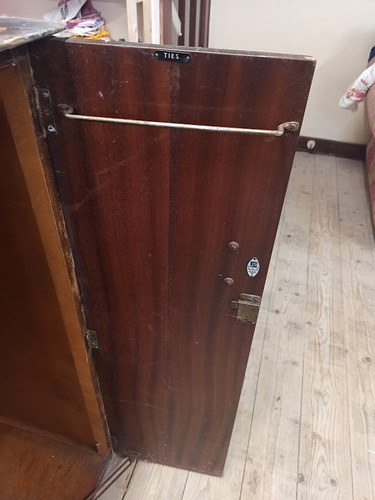 image681×907 88.6 KB
Four drawers for jocks and socks and the bottom ‘drawer’ flips down for shoes. When you open the lid it has these three compartments 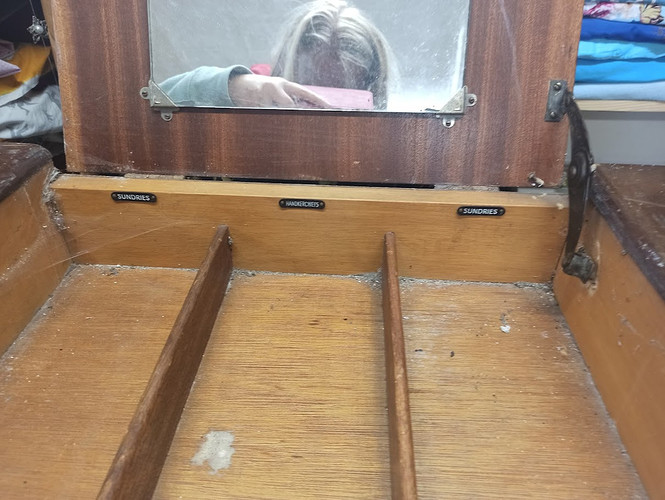 image1208×907 226 KB
It is really charming, but when I saw it it was damp and bockety in a neglected corner of the salvage yard. I don’t remember what I paid for it, but it was definitely less than $20.

I had thought it would be good for my husband’s clothing, but he couldn’t see the potential, so it was originally destined for the shed, but I guess walking around it for a few months must have worked some kind of magic on him because he asked me to paint it for him.

I sanded, primed and gave it three coats of a matt paint (not chalk paint, because the price of the stuff is just silly) The stencils came from aliexpress and I had what I modestly think was a genius bit of whimsy to have one of the bees escaping from the stencil. So then I had to give that bee some friends, and so it goes. 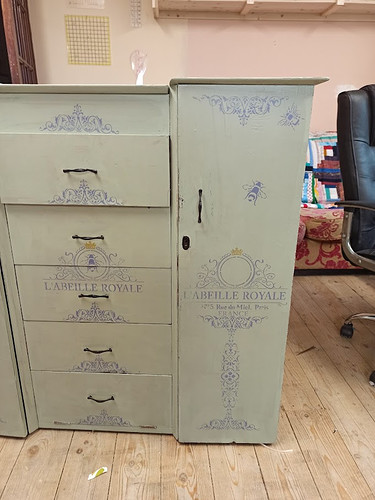 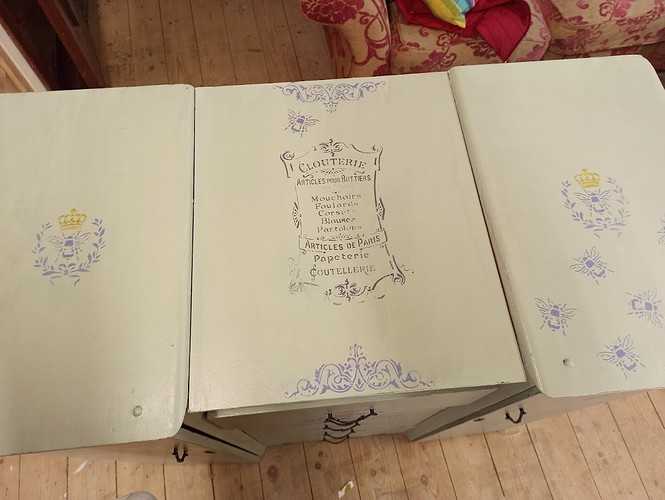 To stick with the bee theme, I used glass etch paste to etch a bee on the mirror inside. I was really pleased that this worked, but not 100% sure it would as I didn’t want to remove the mirror because the screws on all the hardware are really rusty. 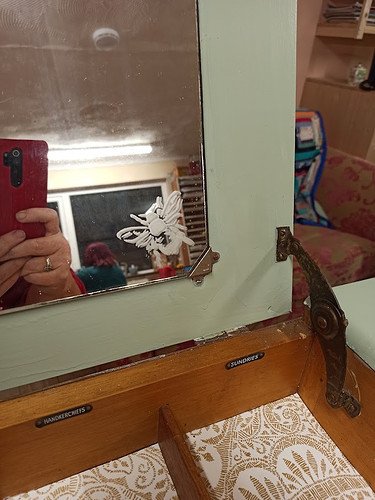 For a pop of colour, I put this funky lemur wallpaper inside the doors 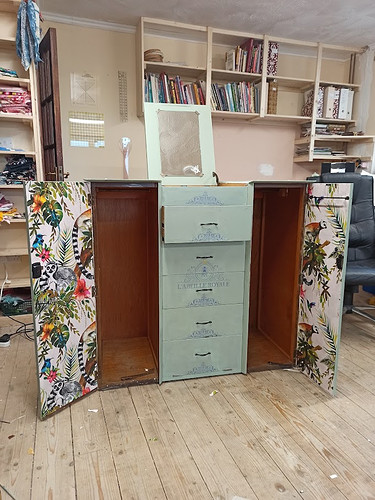 image681×907 208 KB
and then as a final touch of whimsey I added this little gecko inside the top. 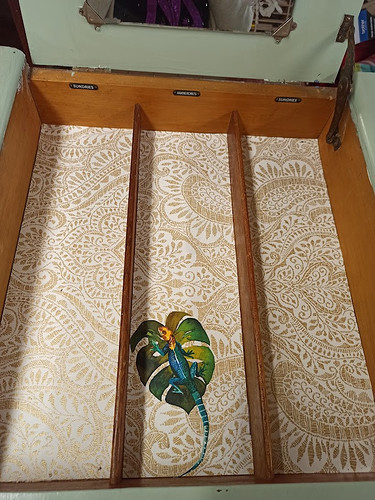 The legs originally would have had brass caps on the ends of the black painted wood, but they were really corroded and nothing would bring them back to life, so I gold leafed the ends, and then added some gold to the bee crowns to balance out the gold at the end,

Rather than replace the hardware, which was also fairly tired, I painted it black.

I sanded back some of the stencils and the edges of the piece to make it look slightly distressed. The then whole thing got a coat of a glaze to which I added a small amount of black paint. I wanted it to look old and the paint finish was too new looking.

I really like it, as does he. There may be a fight for it now.

I love this transformation! (And learned a new word, which is always a bonus.

its a great word, as it is very onomatopoeic.

Wow, that’s quite the transformation! I’ve never seen a wardrobe like this but would love to have one.

New words …
bockety (which you defined)
onomatopoeic - ??
I assume jocks are underwear ?

onomatopoeic means a word that sounds like the noise it describes. the “buzz” of a bee is an example.

I’ve never heard bockety before, but knew what it meant as soon as I read it!
What a cool makeover!

All around WOW! The piece itself was so cool, even in it’s bockety state! And YES “bockety” is a great word - I was going to say onomatopoeic, but you beat me to it. It may enter the lexicon here at our place.

In fact I just glance over at an end table that I love and want to copy to make a pair, but boy is it bockety!

I love, love, LOVE what you’ve done with it and so, so glad to know that Brian came to see though it’s declined state. You’ve done an amazing job with all the thoughtful details. The stencil placement, the bits of gold, the etched mirror, the wallpaper, the distressing/glaze!

What an amazing transformation! Love all the little escapees. Totally charming.

No it’s mine. I have all the hair now

It came out beautifully! I love how it labels where things go, in case the gentlemen in question is an eejit and easily confused by clothing himself. You gave it so much fun new life.

This was an old bockety (turns out the two people I said that word to today, who are both irish, have never heard that word, it is an irish idiom for something that is a bit wobbly and unstable)

How did I already know that word? It made perfect sense to me, no definition needed. Maybe it’s one I heard my Irish grandparents or aunts & uncles use? Not sure.

No it’s mine. I have all the hair now

I think she meant further down, the pic with the etched bee on the mirror. We can see hands holding a phone, which must be you. But in the background, another head that must be Mol. 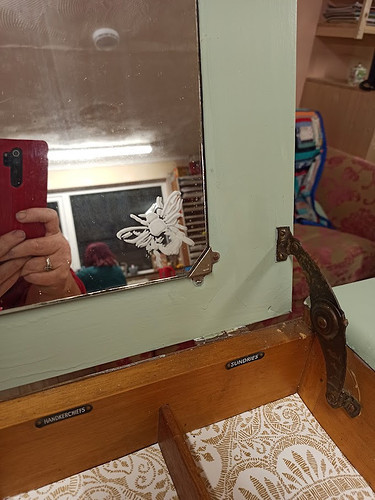 Yes you Sherlock Holmes you (both of you!) Yes it’s Mollie with a new red head!

It really is such a neat piece of furniture and I love the way you transformed it. So whimsical and well-done! I just adore the little bees.

I know bockety from “Angela’s Ashes.” One of my favorite Irish words.

You knocked it out of the park (an American baseball expression) with this dresser. Love the bees and all of the other details. Wow!

But, the BEES tho…

this is so fabulous. Love the peeks of you too, extra double plus bonus good times

That came out so well! Glorious!

It made perfect sense to me, no definition needed.

I feel like it’s just one of those things that sounds exactly like the thing it’s describing; why would we need a definition in context? Probably the similarity to “rickety” & maybe “buckle” help… (also I am definitely making a note of it to use!)

This turned out so beautifully!

You have done and absolutely outstanding job on the charming piece of furniture! The whimsy is fantastic. You can tell you poured yourself into the making of it. Thank you for sharing this charming work.

(I knew I was wobbly and unsteady, due to rheumatoid arthritis, but I didn’t know there was a name for it . lol)