I started this project about… six months ago? At least. But then it sat languishing on my desk for ages, occasionally getting a few small pieces added but mostly left ignored. Finally this last weekend, I decided I needed to do something about my growing pile of WIPs, and I actually finished her! Meet Gertie the Anglerfish! 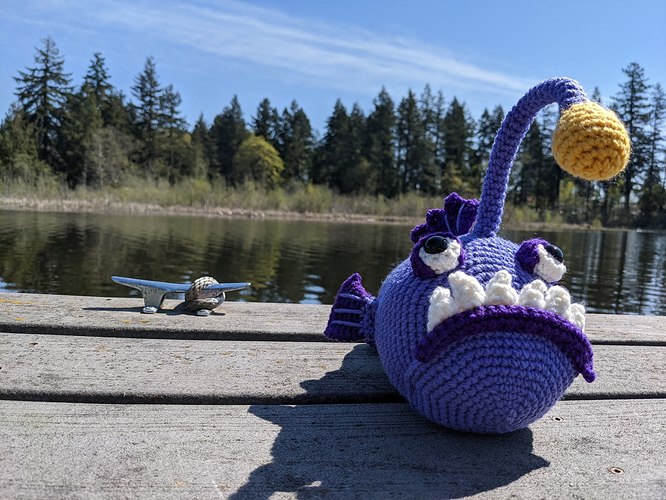 She’s from a pattern in Zoomigurumi 9 called Angie the Anglerfish. I decided mine was definitely a Gertie. (Random trivia: when I showed this to my brother, he immediately said it must be a female anglerfish because the male looks like this!)

I was super pleased with how Gertie (finally!) turned out, so here are a whole buncha photos: 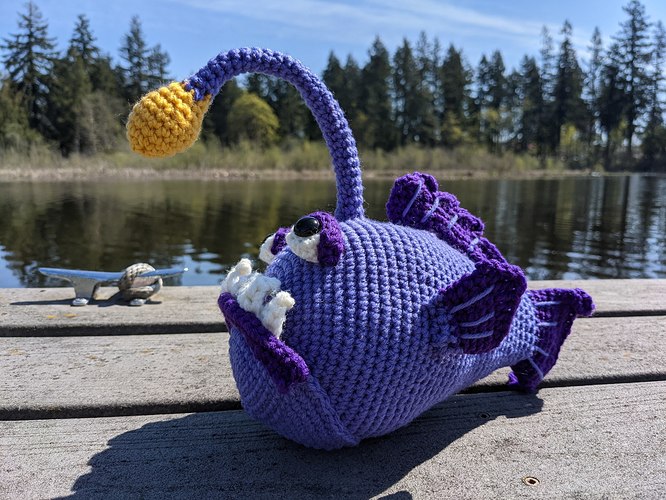 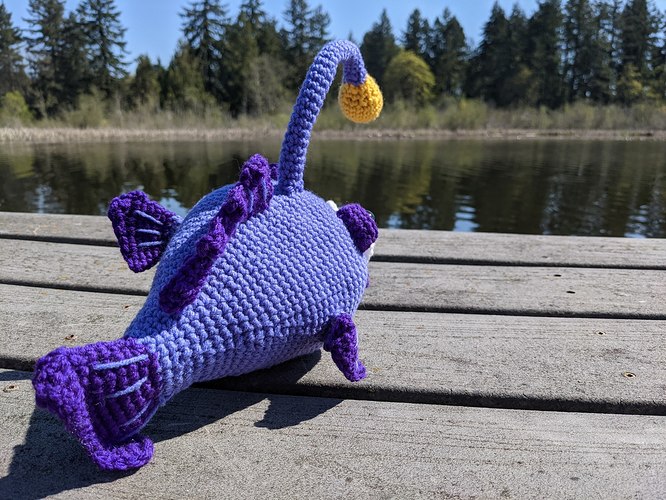 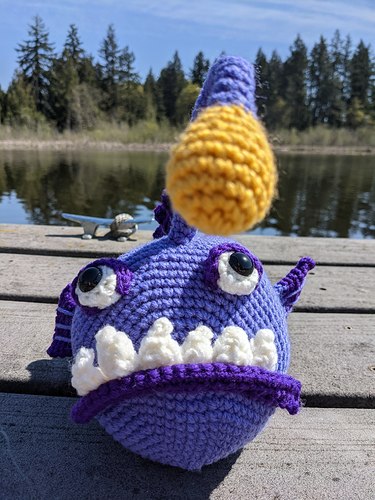 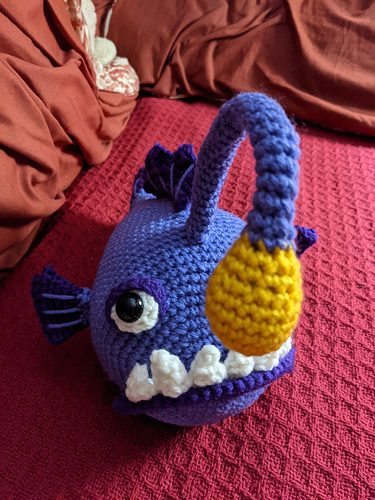 Oh, also, this was my first time using wire armatures, which I thought might be pretty difficult, but it turned out to be way easier than I thought! I was working on this while playing D&D via Zoom and was excited to be nearly finished, but then realized I needed to run downstairs to grab one final supply. I excused myself and hurried back, explaining that this was the last supply I needed for a crochet project, and held up a roll of duct tape.
D&D Party: We don’t know much about crochet, but we’re pretty sure it doesn’t usually involve duct tape.
Me: This is just to wrap around the pointy ends of the wire armature so that it doesn’t stab anybody.
Party: We appreciate your dedication to not stabbing anybody.
Me: That’s probably why I’m doing so little damage in this battle. 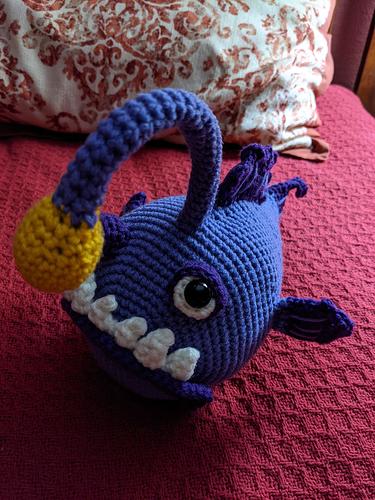 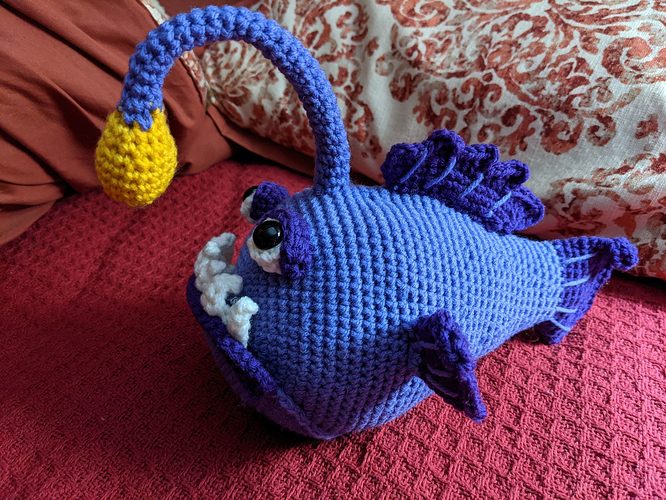 I’m also pleased to announce that between Gertie and the dragon I made last year, I have nearly used up both my lavender and purple yarn. Does that count as stash busting? The amount I’ve used is far less than the amount I’ve therapy-purchased online in the last year, but I’m gonna go with YES!

Cute, weird fish! Does it glow in the dark?

Any material not purchased specifically for the project it is used in counts as stash busting. There, that’s the final word. I HAVE SPOKEN.

Fortunately, I buy a lot of stuff on spec, so rarely need to buy supplies for a specific project. When I do, more than half the time I don’t make the planned project (I’m looking at YOU, hula girl robe, bathroom shades, and Bumble tree topper). Fortunately, those materials become stash, and are eligible for busting credit.

It’s a complex system, as I’m sure you all know.

Thanks! No, it doesn’t glow, but some time I’d like to try to engineer one that does!

Hahaha, I am solidly in your camp about stash busting, and appreciate the authoritative answer! XD Most of my stuff is also made from stash, but that’s because I buy way too much stuff without a specific project in mind.

Trying to cut down a little bit on that, with mixed results.

Oh, Gertie! Those eyes! Those teeth! You are one fantastic fish!

Does that count as stash busting?

Sure. Go with that.

I do count it as stash busting. I just add to my stash faster than I bust, same as you and probably nearly every other artist out there

Gertie is the best! I love all of your creations!

They’re all from available patterns in books/online if anyone wants to recreate them!

Sooo… are you making her a boyfriend? You could use a bit of velcro if she doesn’t want him attached at the hip at all times…

I feel like I need to see this now.

Angler fish are so dang cool and their romantic lives are a big part of that. I mean, if you decide to make a lil male, you could make this project go on for quite a while constantly morphing and shifting.

" When a young, free-swimming male angler encounters a female , he latches onto her with his sharp teeth. Over time, the male physically fuses with the female , connecting to her skin and bloodstream and losing his eyes and all his internal organs except the testes. A female will carry six or more males on her body."

We could enjoy a whole soap opera!

Okay, seriously, this may be my favorite thing you have ever made. OMG! I love it!

Ohh, this is all just the weirdest. Love it!