I found recipes for this on several YouTube channels. you can use it to make a mold, cast several times in it, then you can melt it and make a new mold.

Possible bonus: it shrinks if left in a dry area, so if you leave a mold in, say, Tucson for several months, you can cast items smaller than the original. My mold that made a 3cm pot six months ago now makes a 25mm pot. That’s 17% smaller. I suspect you could get greater shrinkage if you put more water in the original mix. 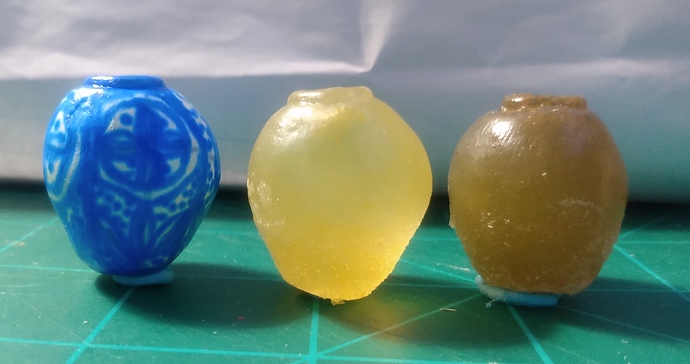 This recipe makes a little more than 2 tablespoons of mold stuff. You probably want to make four batches at once, to give you enough to work with. If you buy bulk gelatin, use 2 parts glycerin, 2 parts gelatin, and 1 part water. Any extra can be stored and melted in the microwave as needed. You can also melt and reuse a mold you don’t need any more.

Mix together well:
1 Tablespoon glycerine (from a drugstore)
1 packet gelatin (2.5 ounces, unflavored, no sugar–Knox brand, for example)
Then add 1/2 Tablespoon water.
*Heat in the microwave for 10 seconds, then stir.
Repeat from * 2 or 3 times, until mixture is consistent.
Use right away, or remelt later. Refrigerate until cold and solid.

Great for resin; seems to take longer than silicone molds for the resin to fully set. The surface will be slightly rough, not glassy smooth like a good silicone mold.
I don’t think it would work well as a press mold, and water-based clay would probably be a disaster.

Food safe for chocolate and candy molds if you haven’t cast non-food stuff in it. Filling must be cool enough not to melt the gelatin (I think they said 140 degrees, test before committing).

What a cool idea! I have this bookmarked for future attempts!

Very interesting! Thanks for the recipe!!

Cool! I want to try it out.

Is this at all like Oyumaru (if you know what that is)?

From your description it sounds like it works in a similar manner except to reuse a piece you stick it in hot water to soften.

I will have to give this a try when I finally get to doing mixed media which I have planned.
Thank you for sharing the recipe!!

They’re both reusable, but otherwise different.

Oyumaru is like clay when soft and you press it onto the original item (the master), then it is stiff when cool. The master must be sturdy and rigid enough to stand up to some pressure. Oyumaru is better for flat or one-sided items, like a press mold, and is more durable.

This G&G (glycerine and gelatin) material is liquid when hot; you pour it like silicone mold material, and it’s flexible when solid. The master can be pretty delicate.
G&G is great for complex 3-D items, and reproduces fine details. I used a straight pin to hold a master in place; when I cast resin in that mold, the pin is reproduced and I have to cut it off.

Did I mention not to leave it outside on a hot day? I did; the mold softened and slumped while the resin was setting, and I wound up with a weird wavelike item instead of a doll head.

Thank you for the thorough explanation of the differences!!

How long does a G&G mold stay good? I’ve cast resin in silicon molds and over time the molds deteriorated and needed to be replaced.

Does the G & G mix eventually become unusable or does it just keep on going?

I mixed mine up last Fall, and it’s still fine. Individual molds might go bad; they can tear when you’re wrestling out a cast piece. And, as I mentioned, they shrink. It might get moldy in a humid climate, but storing in the fridge or freezer would prevent that.

This is so cool! I didn’t know you could make this stuff!