I made this probably about the same time I made the ruffled layers skirt, so sometime this past fall. It was also from the same Simplicity pattern which I am too lazy to look up right now. I never wear them together, though, because Holy Lotta Ruffles, Batman!
I used a dark gray chambray. I think the darker side is actually the “right” side, but I decided to go with the gray and use the charcoal as accents on the neckband and armband. The gem buttons on the neck were originally purchased for something else, but I forgot what, so they got put on this! 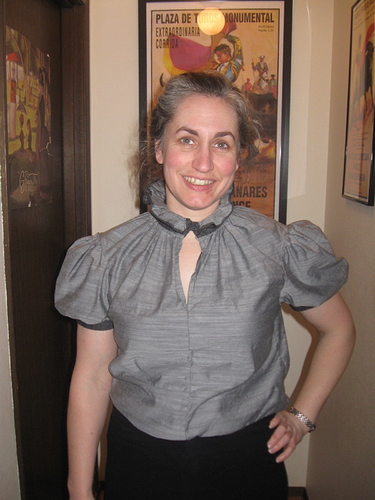 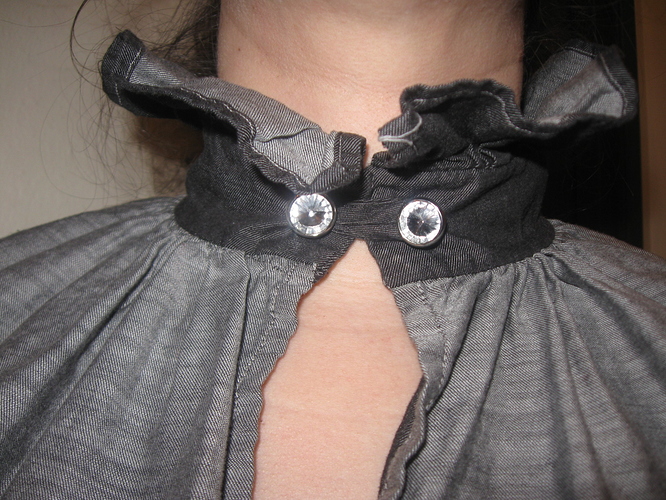 I have found that I absolutely have to wear my hair up with this blouse due to the high collar, but then I feel like I look more prim and proper than I actually am. Thinking about making some kind of cool fascinator to wear with this so that it won’t look so fussy. Maybe something Guns n’ Roses themed.

I love how that blouse style harkens back to something from the Victorian age, but still looks cool and modern and one of a kind. Also love the shade and type of fabric you chose. Great job!

Thank you! It would probably look good with jeans, but I {ahem} outgrew all of my jeans.

That’s a really cool pattern, and I love the splash of darker details around the neck and arms. Great job

Very pretty, and the buttons are perfect for it too!

Pretty blouse and I love the vintage antiquish features with your modern twist.

How cool to have fabric that is nice on both sides…

I like how you took advantage of that by accenting the color and sleeves!

You are so good, how I wish I could sew