How do you fix mistakes?

So I purchased materials to do my first cross stitch this weekend. I purchased a pattern on Etsy and got to work.

I realized I miscounted and my lettering looks a little wonky. 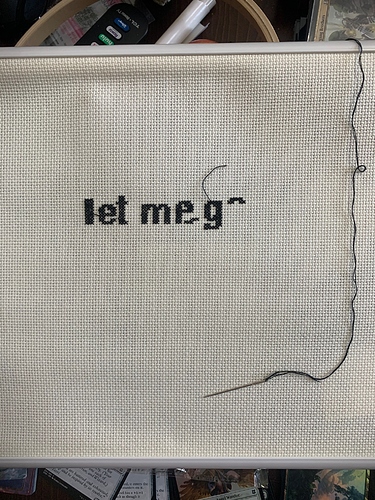 Is there a way I can salvage my “e”? Is this something I could take a seam ripper to or should I just try to make my “e” look more like an “e” with more stitches?

Thanks for your sage wisdom and advice!

It really depends on the look you want: maybe various letters could be a little off so it becomes an “I meant to do it this way” font, and that can be really good with the right words and sayings. But if you want to go strictly by the pattern for the rest of it, I’d start over with the E; it will stick out and bug you if it’s the only letter that doesn’t match up.

I will recommend keeping the same number of blank spaces between each word, whatever you want to do with the individual letters.

You can just trim out the few stitches that don’t match the pattern rather than starting the whole letter over. However, there’s a risk of a) the little wisps of cut thread poking through as you re-stitch (more noticeable because it’s dark thread on light cloth), and b) the closest stitches that remain coming undone. Neither of these is the end of the world or the project, but good to be aware of.

I don’t know whether it was recommended to me or just my own habit, but I like to keep the cutting to a minimum and “un-weave” mistake stitches from the cloth, coaxing the stitches out with a dull needle starting from the cut stitch, and leaving a small tail of thread in the back (unless the whole thread is being removed).

Usually I just unpick stitches. If you’re going to cut, I zprefer to use a small embroidery scissors instead of a seam ripper so I can be really precise about what I cut. But tiny mistakes, I just leave them if they don’t really bother me.

I would pull out the stitches and start over with the letter. I agree, small mistakes I leave.

In this case, I’d pull my stitches out back to the M and start again as it’s thrown everything out. Cutting scares me.

I took all of the feedback to heart; this is my first project so I decided to shape the “e” up a little a leave it a bit wonky. I’m trying to break out of some perfectionist tendencies so accepting it seemed like the better choice this time.

I think I’m going to practice removing stitches on a different piece of Aida in case it happens again in the future. I’ve definitely recognized I need a new pair of glasses and better light.

Unless you were already pining for new glasses, you might consider one of those lighted magnifiers; OTT brand has a good reputation. I finally bought one that can hang from around the neck, and it makes a world of difference. Depending on your crafting space/setup, it may be more practical to consider the ones that clamp onto the edge of the table or stand up like a normal lamp. They have bigger lights.