My daughter is not your “girly girl” so when she showed any interest in using a cross body bag to carry all of her stuff, I was on it!

We were at a large crafts fair when she saw an HP cross body bag. “MOM! I need this bag!” One glance at the price tag made me think to myself “Not at that price.”

She like it for two reasons. It’s HP, which she loves and it was big enough to carry her headphones, that aren’t actually physically attached to her head at all times (even though I think they are most days…).

So I came up with a plan to make an extra large cross body bag with a squared bottom that would accommodate her headphones and other stuff. Unfortunately, I did not get a photo of it before she received it at Christmas, but here’s a photo of it after she got her hands on it…and “blinged” it out with her pins. LoL!

(The fact that she has her Inky and Blinky pins sideways bugs me to no end! 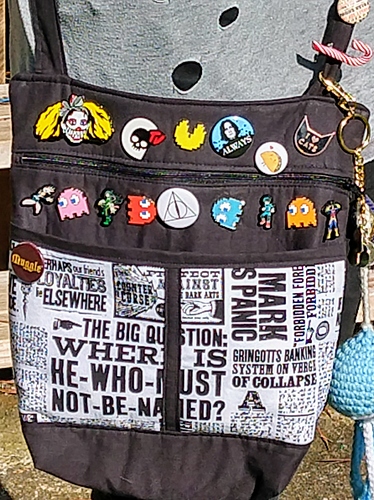 You did a fantastic job with the HP themed bag!
It’s obviously a hit with your dd, given that she has added her personal touch with all those pins

What a win! Making things for tweens/teens is a true challenge…I think the bag is functional, fun and stylish…and she is already on her way to making her mark in the world! WIN!

Awesome! I love her bling!

She keeps adding to it! I laugh every time she finds a new pin. I asked her this past weekend, when she found an enameled macaroon pin that she had to have, if she already needed a second bag.

It’s clear that she adores it! Well done.

It’s lovely. She clearly loves it.

She marked it as her own in no time!

I love a cross body bag and would definitely wear this one out. It looks great!

So cute. I love black and white fabric and the size of this looks perfect! You did a great job on this bag.

This is great! Isn’t it wonderful when your kids appreciate something you made for them? And as a huge Potter fan, I love the fabric choice.

“Not at that price.”

That has been one of the “nope” I’ve given my son sometimes XD Especially as we can make these things ourselves.

This turned out so nicely!