Since the old place finally kicked the bucket I rescued this tutorial from there. Wayback machine remembered

It’s been a while since I wrote it and hopefully my small corrections in transfering it here didn’t mess anthing up.

I made this shawl for the “Make Me Something Fibre Made”-swap and I’m very pleased with the way it turned out. The chart comes from Ysoldes Skull illusion scarf that’s no longer available, but any chart can be used as long as it’s not too wide. I had to flip the chart upside down to get the skulls right way up on the shawl. 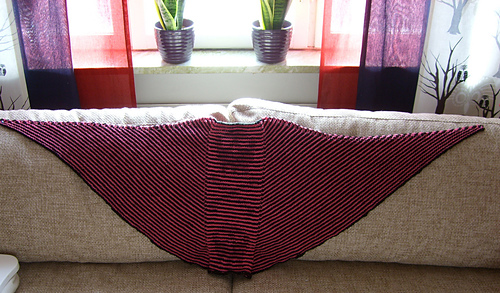 Close up on the illusion: 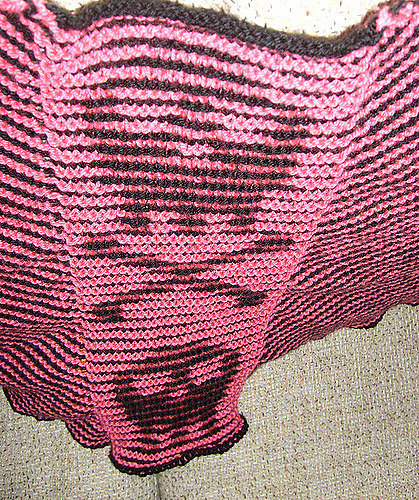 Curling is a problem with illusion projects, but since the “wings” of the shawl are knitted in garter stitch I managed to mostly avoid the problem. I removed one stitch from each side of the chart since the sides of the shawl will prevent it from curling.

Tutorial
It helps to be familiar with shadow knitting, but ask me if anything is unclear and I’ll try to explain or point you to a shadow knitting tutorial.

Materials:
I used Marks & Kattens Carolina, 2 skeins black and 2 skeins pink.
Long circular US 6 / 4.0 mm needle. It helps if it can be extended as you go. (I used my Denise set)

Gauge is not terribly important as long as the fabric is not too loose. You’ll want it dense but still with a nice drape.

You might want to knit a few more stripes using only increases and garter stitch before starting the chart to combat curling.

Rinse and repeat. When the shawl is large enough you should add a couple of garter stitch rows at the end of the middle panel to make sure the bottom doesn’t curl up. Cast off loosely.

I’ll polish the tutorial a bit so feel free to ask questions and suggest what I can clarify! 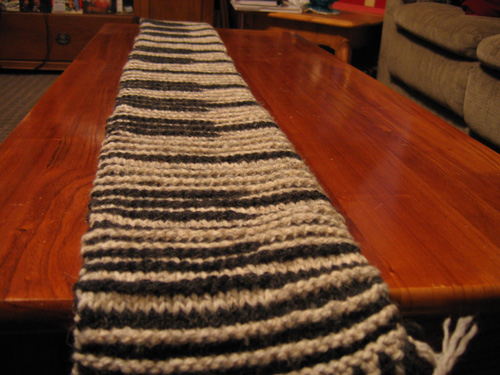 Shadow or Illusion Knitting: Shadow knitting, or illusion knitting, is a process of knitting such that the finished piece has a hidden image only viewable from an angle. The effect is created by alternating rows of two colored yarns so that the...

The basic idea behind illusion knitting is to use the two yarn colours to create an optical illusion. You can’t use colours that are too close together but dark blue + light blue works just fine for example. If in doubt take a photo and make it black and white to check contrast.

Each part of the pattern consists of 4 rows, 2 in each colour. Row 1 and 3 is always knitted and just serves to space out the pattern and make the stripes look nice.

The magic happens in row 2 and 4 where alternating knits and purls decides what colour the illusion will get. Knitting on the wrong side produces bumps on the right side that will make that particular colour show.

Knitting colour A + Purling colour B = Colour A shows

Knitting colour B + Purling colour A = Colour B shows

From my experience it’s easier if the pattern repeat is not huge, since you might not see the entire illusion at once unless you lay your garment flat and look at it from the right angle.

If you like purling more than knitting, you can of course purl the odd rows instead and just reverse the instructions above. 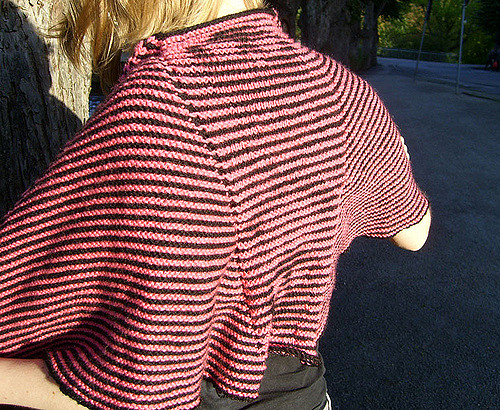 Thanks for explaining this technique! I have always admired it but was not sure how it worked!

The shawl is awesome…

This is SO rad!

I have never seen this technique before! How cool!

I don’t knit, so the directions are quite mysterious.

It is! And it’s really quite doable for an adventurous newbie.

I think I fall into that category. I’m not much of a knitter (yet!).

I can’t do anything with yarn but this is super cool!